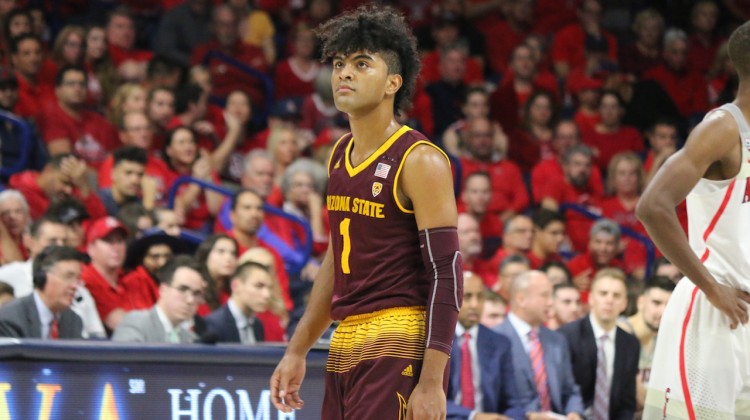 Arizona State’s Remy Martin started his career as a spark off the bench in the inception of the 2017 “Guard U” team. He quickly developed into one of the most reliable players in the Bobby Hurley era.

On Monday, Martin declared for the 2020 NBA Draft.

Arizona State junior point guard Remy Martin has declared for the NBA Draft, he tells @Stadium. Averaged 19.1 points and 4.1 assists this past season for the Sun Devils. pic.twitter.com/w3pECSjejB

The 6-foot, 170-pound point guard averaged 19.1 points, 4.1 assists and 33.8 minutes per game in his junior season. The 2020 All-Pac-12 First Team selection still has flexibility to return to the college ranks before June 15 if he does not hire an agent.

Sam Vecenie, who covers the NBA Draft for The Athletic, feels Martin should listen to feedback from the NBA before deciding whether to head to the draft.

“Nothing about it here, but I hope Remy Martin keeps his options open to return to school,” Vecenie said in a tweet. “Don’t think he’s a top-100 NBA prospect right now, even though I think he made significant strides this year.”

Martin is the 2017 Pac-12 6th Man of the Year and a two-time All-Conference selection.

The point guard is one of the highest-rated recruits to ever come to Tempe along with current Sun Devils Romello White and Kimani Lawrence.