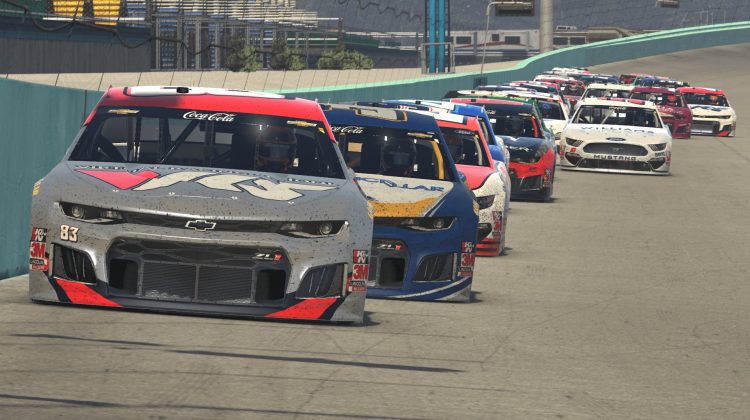 Imagine every player on the Phoenix Suns and Minnesota Timberwolves rosters all had a controller to play as themselves on NBA 2K. Players simulating virtual games running their own plays and battling as they would on a real basketball court. Even take it another step and put the virtual event on national television. While that is unlikely to happen, it would undoubtedly find some good viewership from fans deprived of live sports.

With all live sports on hiatus likely until May due to COVID-19 concerns, all TV time slots featuring live sports have been replaced, reportedly except for one. Sports Business Journal’s, Adam Stern, reported NASCAR will have a live race broadcasted on FS1 on Sunday starting at 1:30 p.m. EST, “barring any late issues.” The race will take place in a virtual setting, though, featuring real-life NASCAR drivers with a steering wheel in their living room.

NASCAR worked with motorsports simulator, iRacing, to create a Pro Invitational Series featuring NASCAR drivers like Dale Earnhardt Jr., Kyle Busch, Denny Hamlin, and many other NASCAR drivers to race at a virtual version of Homestead-Miami Speedway, where this week’s race was supposed to be held in the physical world.

iRacing laser scans real-life race tracks to make their virtual venues as similar to reality as possible. Along with accurate track with dynamic track conditions to change with weather and tire wear, the virtual cars are also made to be adjusted similarly to a real NASCAR vehicle. In essence, iRacing has become the closest thing to real-life racing from setups, to tracks, and everything in between.

Drivers use iRacing and other simulators to take virtual test laps at tracks to gain experience before racing at the track in real life.

“Until we have cars back on track, the entire NASCAR community has aligned to provide our passionate fans with a unique, fun and competitive experience on race day,” said Ben Kennedy, vice president, racing development, NASCAR. “Our long-time partners at iRacing offer an incredible product and we are excited to see how many of our best drivers will stack up in the virtual domain of competitive racing.”

There will be some great action on Sunday – Make sure to watch the @iRacing feed to see @chaseelliott pilot his @TeamHendrick #9 in the @SimCraft #APEX6 against the other @NASCAR Cup Drivers on as they take on @HomesteadMiami #6DOF #IndependentFullMotion pic.twitter.com/2715NLW0VD

NASCAR has sanctioned a championship series on iRacing since 2010. The eNASCAR Coca-Cola iRacing Series reached nearly 300,000 viewers in their weekly championship series race on Tuesday, and over 1.1 million minutes watched. The series has had multiple races broadcasted live on NBCSN in the past.

No races have been officially canceled and NASCAR plans to make up all eight races that are currently postponed through May 3. The Pro Invite exhibition series featuring NASCAR drivers is planned to continue weekly but no official TV deal is in place.