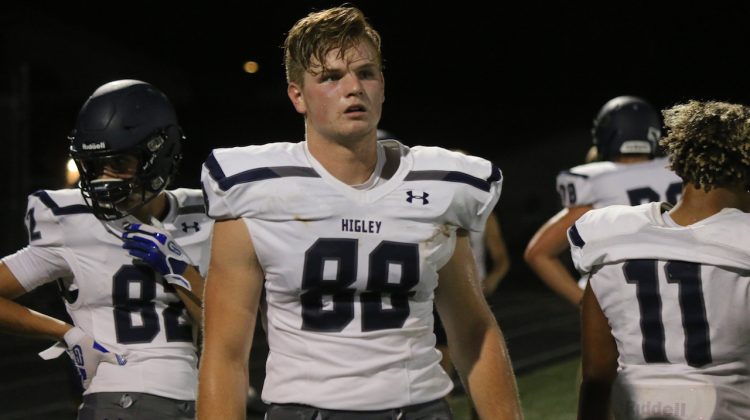 Higley tight end Alex Lines made an impact as a senior in the Knights’ run game as a blocker and a big-bodied target for Kai Millner in the pass game.

Now, he takes his next step in his football journey as he signed with UNLV on Wednesday.

“It was just an overall feeling,” Lines said. “I think a lot of places seemed right in my mind, but my heart was telling me UNLV, so I had to follow my gut.”

Lines visited the the Rebels in early January and was impressed with their coaching staff led by former Oregon offensive coordinator Marcus Arroyo and tight ends coach Jordan Paopao, who served in the same role for Washington for seven years. The Rebels’ upgraded facilities also jumped out to the tight end.

“All the coaches there are coming from the Power 5 level so they have a lot of experience at the highest level possible. Coach Paopao was recruiting me at Washington so I already knew him and had a relationship with him. I know what he does and how he develops tight ends and that was a really big thing for me because you’re only as good as your coach.”

Lines believes Higley coach Eddy Zubey played an important role in his recruitment, not only bringing in coaches to see the tight end, but being supportive once a decision had to be made.

“He’s the one who made this all possible in terms of getting these opportunities,” Lines said. “Coach Zubey really didn’t push me toward any decision, he just said, ‘I want what’s best for you.’ I really appreciated that.”

Lines will be one of many Arizona players on the Rebels roster next year, joining former Chandler Wolves Chris Manoa and Bryce Jackson and Saguaro’s Seth Robinson as former Arizona prep players to play for UNLV.