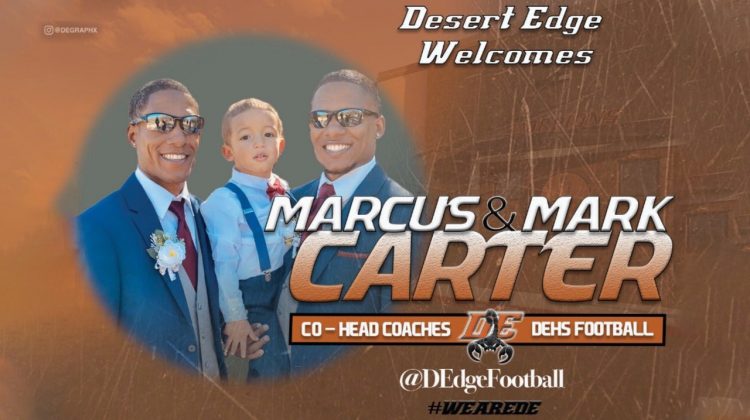 Desert Edge High School has hired Marcus and Mark Carter as their new co-head coaches after the board approved the process on Wednesday evening.

Scorpion Nation is excited to announce that the governing board has officially approved Marcus Carter as our next Head Football Coach. He will he joined by brother Mark Carter as co-head coach. #WeRDE pic.twitter.com/3aDnK0FqGa

The twins will make the move west from South Mountain High where they were not only instrumental in turning around the Jaguars on the field but adding stability to the program off of it, as well.

“This is a great opportunity to inspire more young men,” Marcus Carter said to Sports360AZ.com Wednesday night shortly after the decision was made. “Just really blessed for Mark and I to be a part of such a great school [and] community. We are very excited to get to work and be a part of their family. Now it’s time to get to work.”

After winning just one game in their first season at South (2016), the victory total climbed from five victories in 2017, to six in 2018 and last fall the Jags went 7-3, winning their first region championship in 11 years.

“I still love South Mountain,” Mark Carter said to Sports360AZ.com. “We thank God for that experience. It prepared us for what we have in front of us now. For that, we will always be grateful. It was a tough decision because of all the great times we had there.”

“The Mountain” had won just six games the previous six seasons combined before the Carter’s arrived from Central High School. They were awarded and shared the 2019 Earl Putman National Football Foundation Coach of the Year Award.

“South will always hold a special place in our hearts,” Marcus Carter said. “From the players, the district and the community. We are forever grateful for the opportunity they gave us. [We] wish them nothing but love and success for them in the future. It will always be #CTC.”

They take over a Desert Edge program with not only a deep history of football success but a currently loaded roster with talented, Division I-level returnees like cornerback Steven Ortiz, Jr., quarterback Adryan Lara, wide receiver Andrew Patterson, running back Jeryll McIntosh, offensive lineman Gavin Broscious and several others with previous varsity experience.

“Very excited for Marcus, the coaches coming and myself for having this opportunity,” Mark Carter said. “We want to keep progressing. Life is about progression. We felt the players, administration and community they have at Desert Edge, this was a great way to progress.”

The Carter’s are certainly no strangers to deep playoff success. They were a part of Cactus High’s 2005 and 2009 4A State Championship teams under then long-time head coach Larry Fetkenhier.

Desert Edge is coming off a 10-4 season, falling to Mesquite in the 4A State Championship. The Carter’s will be replacing Jose Lucero, who left to become the head coach at his alma mater, Saint Mary’s, in mid-December.

The Scorpions were recently reclassified to 5A and will compete in the West I Region this fall.