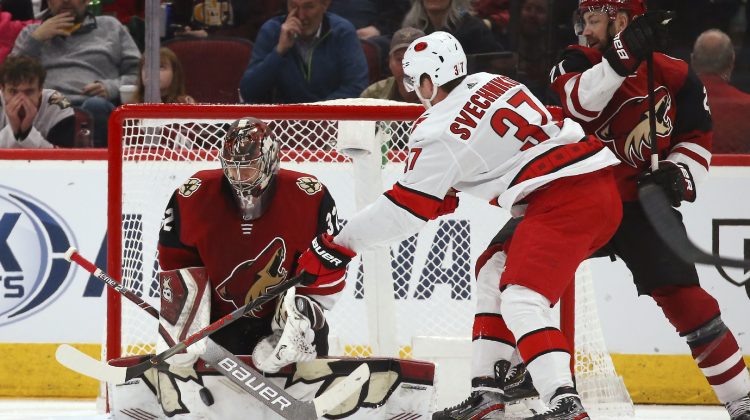 The Arizona Coyotes have one win in their last seven games. Although the team has recorded points in two of those contests, some late-season adversity seems to be setting in out in Glendale.

And for head coach Rick Tocchet, he was blunt when discussing his group’s effort in a 5-3 loss against the Carolina Hurricanes on Thursday, a game in which Arizona led 2-0 early in the second period.

“It’s just stupidity. There’s nothing else to sugarcoat it. You guys saw it,” Tocchet said. “I don’t know what else to say. You have to play gritty…It really upsets the staff because this is crunch time.”

The Coyotes still sit in the top wild card position in the Western Conference with 61 points. Though, the race is tight among the west’s Stanley Cup Playoff contenders.

Additionally, the Yotes’ sit in fourth place in the Pacific Division after being near the top of the standings for the majority of the first half of the season.

When the Coyotes have been at their best, it has come with a suffocating style of play – hard forechecking, tight gap control, turnover-free breakout passes, solid defensive play, and stellar goaltending.

However, over the last month, things have started to steer astray. The tight-knit defensive regiment has started to bend.

Some of the cause can be attributed to the loss of starting goaltender Darcy Kuemper, who has been out with a lower body injury since Dec. 19.

In recent weeks, the team has also been without two of their top men on the blue line, as defensemen Jason Demers and captain Oliver Ekman-Larsson have been sidelined due to injury.

Filling in has been defensemen Ilya Lyubushkin and Aaron Ness. Regardless, Tocchet isn’t chalking up losses to health.

“We can use excuses with injuries and stuff but Nesser (Ness) and Bush (Lyubushkin), they are giving us their all. Just move the game along. There’s nothing else to analyze and that’s the game tonight,” said Tocchet after the loss to Carolina. “We weren’t tough in front of our net.”

Thursday’s loss comes after one of the more inspiring defensive efforts of the season just two nights prior, too. The Coyotes shut out Connor McDavid and Leon Draisaitl – two of the best players in the world, by a final of 3-0 against the Edmonton Oilers.

The identity of the early season Coyotes seemed to return to form at least for that night, and without Demers and Ekman-Larsson, it proved what the group is capable of if they play their brand of hockey.

“I think you saw right from the drop of the puck, we were playing as a unit,” said forward Taylor Hall after the win against Edmonton. “When we were defending, it seemed like we were a five-man unit and defending through the middle of the ice. After the first period, they had four shots, so it was a strong game for us and we can play that way for a lot of nights.”

Nevertheless, the frustrating defensive miscues returned to close out the four-game home stand in which the Coyotes went 1-1-2.

After going up 2-0 against Carolina, the Canes scored three straight goals, with two coming from forward Andrei Svechnikov. One goal came as a result as a missed defensive box out in front, and another came as a lost battle in behind the net.

Despite outshooting their opponents 33-31, the second period woes deflated momentum and ultimately added to the defensive lapses that have occurred over the last month. A strong opening 20 minutes was put to the wayside and the Coyotes were forced to play from behind the rest of the way.

“It’s just about getting back to what we did against Edmonton. I think we played a good game there and tonight we really had a good first period,” said defenseman Jakob Chychrun. “For whatever reason, we let it go downhill in the second. We can’t let that happen at this point in the season. These points are crucial.”

The road doesn’t get much easier from here on out, either, as the Coyotes turn around for a road trip with a grueling cross country start against the league-leading Boston Bruins on Saturday afternoon.

Although the Coyotes still control their own destiny with a lot of hockey left to play, the urgency level seems to be high with just over 20 games remaining, and the Yotes’ will have to come together and lean on each other coming down the homestretch.

“You can’t get too high or too low on yourself,” Chychrun said. “You just have to get ready for the next shift…It starts with us in here. We need to continue to do a good job of sticking up for each other and continue to be there for one another.”