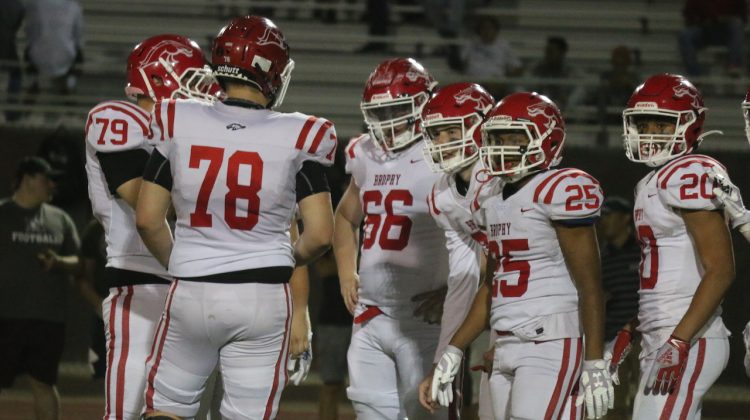 Let’s just start this whole article with a disclaimer:

Yes, I worked closely with Jason Jewell for years as the host of the Recruiting Roundup. Jason brought and still brings insight, connections, and a passion for getting players to the next level. Most of you know his prowess for reporting the facts and evaluating talent. I got to see it close up each and every week until he took over as head coach of the Brophy Broncos last year.

Am I biased when talking about Jason and his football knowledge?

Am I wrong if I say he’s one of the most knowledgeable recruiting minds in the state/region/country?

And, bias or not, the numbers don’t lie about Brophy’s senior class and the job Bronco community, players and Jewell’s coaching staff have done to get this group to the next level.

Of their 30 seniors, the Brophy coach said 16 players wanted to continue their football journeys and play college football.

According to Jewell, all 16 have scholarship offers.

The group brought a lot of talent and experience to the field.

The recruiting class was headlined by Andrew Milek, a 6-foot-6, 295-pound offensive lineman that singed with USC in December. Michael Diaz signed with Santa Clara to play baseball and had football offers. Quarterback Matt Winter will play at Western New Mexico. Regis Velez, who is coming off a season-ending injury, will be a part of NAU’s program, as well as other seniors.

Jewell has a unique perspective on signing day, going through it as a player, junior college coach, reporter and now high school coach.

“You’re just proud of these kids to move on,” Jewell said. “I’m proud of all my guys. Jack Taylor, our linebacker, had opportunities to play but he got accepted to Notre Dame just to go to school, and that’s what he’s going to do. I’m just proud of those guys too.”

Jewell said about 90% of Brophy’s entire student body will go to college because of the high academic demands at the school. Pair that with playing against some of the best programs in the state, and he believes his players are not short on opportunities at the next level.

“I think at a place like Brophy, where all the kids have high academics and have a chance to go play, they’ll have that chance,” Jewell said.

“What I try to instill in them is how awesome it is to go play college football because not a lot of people get to do that.”

“It’s a smaller class for the (2021 class),” Jewell said. “All of those kids that want to will have a chance to play (at the next level). It is a smaller group but we return a group that played a lot. Same thing with the (2022 class).”

Now, there are plenty of pieces to the recruiting puzzle. It’s not just having a well-connected coach. It takes talent, hard work, proper exposure, and even a little bit of luck. It’s also helpful to be realistic in the process.

“Having the experience of having kids play different levels, I have a good feel for what level a lot of these kids can play at,” Jewell said. “I should be honest with their parents and the kids so they don’t get unrealistic expectations…I’m not the one passing out scholarship offers, but the biggest thing is I can bring is exposure and kids get noticed.”

According to Jewell, the entire Brophy community will “go above and beyond” to create opportunities for their students.

“For the players that want to keep playing, I’m going to fight for them.”