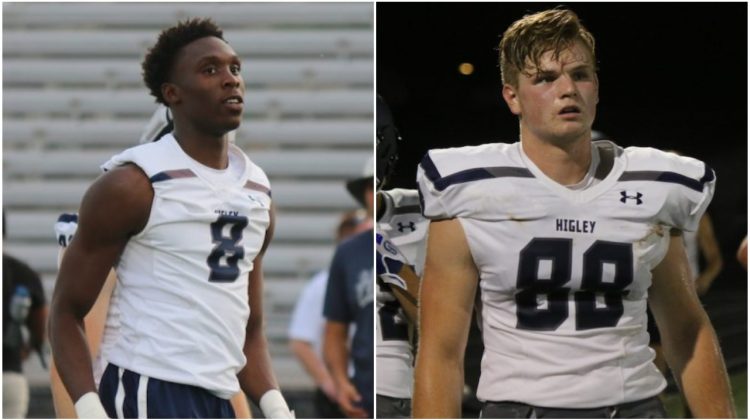 Higley High School has become one of the first stops college coaches make now with elite recruits at key positions in multiple classes.

The Recruiting Roundup went on the road to Venezia’s Pizzeria on Guadalupe and Ellsworth to talk to two players from the Knights’ 2020 class: Jason Harris and Alex Lines.

Harris made his commitment to Colorado at the Under Armour Game, joining Hamilton wide receiver Brenden Rice as Buffalo signees. The 5A sack leader took the next step in his recruiting journey while at the game and feels he improved against the elite competition he went against.

“I looked at it as a confidence builder for me because there were some big dudes out there,” Harris said. “They were 6’6′, 300 pounds. They’re big dudes who sometimes are as big as me. Having the opportunity to do that and learn from my mistakes, that was great. I want to have the opportunity to fail, have success and learn.”

He goes in-depth on his commitment and the journey it took to get there in the video below.

Tight end Alex Lines has had an interesting journey in his recruitment. Despite having to sit out his entire junior season due to transfer rules, that did not slow down his recruitment. The 6’4″, 235-pound tight end returned to the field as a senior and notched 27 catches for 277 yards and four touchdowns. He was always a crucial blocker in the Higley run scheme. Lines has offers from the likes of Lousiville, Memphis, Syracuse, Iowa State, Boise State, NAU, Utah, Oregon State, Utah State, BYU, Colorado and UNLV.

He has already gone on official vists to BYU and UNLV. While visiting the Cougars, he enjoyed the famil atmosphere and how they utilize the tight ends. While at UNLV, he got to know Jordan Paopao, who just joined the Rebels staff from Washington, and learned more about the program’s new facilities. He will visit Boise State this upcoming weekend.

Signing day is February 5th, make sure to keep it to the Venezia’s Pizzeria Recruiting Roundup each and every week.