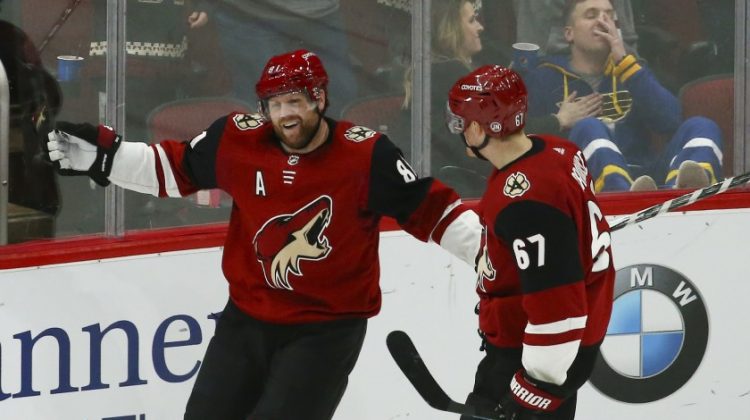 Entering 2020, the Arizona Coyotes sit in second place in the NHL’s Pacific Division, trailing the Las Vegas Golden Knights by a mere two points. They also hold the fifth-seed in the Western Conference playoff picture with a season that has many more games left to play.

If there was any question about their legitimacy among the league’s high-caliber oppositions, that was certified on New Year’s Eve when the Yotes’ took down the defending Stanley Cup Champion St. Louis Blues by a final of 3-1 at Gila River Arena, snapping a three-game losing skid which was the Coyotes longest losing drought of the year.

The Blues on the other hand, were the hottest team in the league coming in, winning their previous eight contests in December.

Phil Kessel buried his ninth goal of the season as a game-winner, and Taylor Hall was a force all night long on the first line long alongside forwards Conor Garland and Christian Dvorak.

The matchup against St. Louis also marked the 42nd game of the season, meaning that the Coyotes are officially past the halfway point of the year.

This year’s brand of hockey out in Glendale seems to have a different feeling from year’s past, and with the home stretch of the season coming up, here’s a midseason assessment of the good, the bad, and the not so ugly 2019-20 campaign thus far.

Health, scoring depth, and goaltending. These three areas have all been pivotal in the success of this year’s Coyotes team. Last season, the Yotes’ didn’t have a single 20-goal scorer, nor did they have a player with 50 points or more.

This year, the group seems to be on a much better pace. Forward Nick Schmaltz, who was injured for most of the year after being acquired from the Chicago Blackhawks last season, is back and healthy. He leads the team with 32 points.

Forward Carl Soderberg, who was picked up this summer in a trade with the Colorado Avalanche, has been a valued asset as he is tied for third on the team in points with 29.

Add in the breakout of 2016 first-round draft pick and defenseman Jakob Chychrun, who has a career-high 10 goals already, and that’s a formula that has carried the Coyotes.

And of course, having two starting-caliber goaltenders isn’t bad, either. Goaltender Darcy Kuemper got hurt against the Minnesota Wild on Dec. 20, but Antti Raanta has filled the void admirably in Kuemper’s absence. He made 38 saves in Tuesday’s victory over the Blues.

“You want to show that you can do the job and get the wins,” said Raanta of filling in for Kuemper. “I know that I can play at a good level in this league, so I am just trying to find the rhythm with the normal things and the small details.”

If there is a knock on this year’s Coyotes team, it might be their play in Glendale. At Gila River Arena, the Yotes’ are just 9-10-1 compared to their away record, which sits at 13-6-3.

It seems there is no particular reason for the losing record on home ice, but it’s something that will look to get cleaned up, especially if there is any home ice advantage in Arizona come playoff time.

Overall though, the Coyotes sit at a great spot entering 2020. And if Tuesday’s win over a legitimate Stanley Cup contender was any indication, it appears the Yotes’ are geared to compete among the NHL’s elite.

“We got a good team here,” said Kessel after Tuesday’s Coyotes win over the Blues. “We work hard and we are tough to play against, and I think every night we are going to give them a close game.”

The Coyotes are back to action Thursday at Gila River Arena for a 7 p.m. puck drop against the Anaheim Ducks.