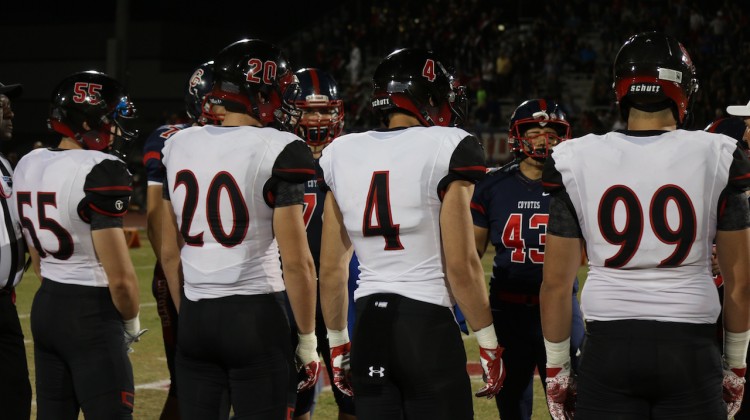 With realignment for the 2020 football season nearly completed, the AIA released preliminary region alignments including some unexpected changes. Not only is the 6A Conference just named “Region 1,” “Region 2,” etc., which is absolutely no fun, but these alignments will bring some long-awaited rivalries back into west side football.

This change wasn’t all that unexpected. Actually, I’ve been begging for this matchup since realignment based on program success was first accepted by the AIA. With the Centennial Coyotes moved to the 6A Conference, they’ve been placed in the same region as the defending 6A Champions, the Liberty Lions.

Some rivalries are formed after years of battle, like Brophy Prep and St. Mary’s. Most are formed by nearby sister schools. The latter of the two are some of those most recognizable; Chaparral vs. Saguaro, Hamilton vs. Chandler, Cactus vs. Peoria, etc. In my mind, “pseudo rivalries” are caused when a team somehow no longer competes against their natural rival but finds a new rival to battle.

After Liberty and their natural rivals, Sunrise Mountain, lost their rivalry meeting in 2013, it didn’t take long for the Lions to establish a new heated Peoria District battle on the west side. The ‘Yotes replaced Sunrise Mountain on Liberty’s 2013 schedule, the first of eight meetings through 2017, including three meetings in the postseason. The rivalry came to an intense climax in just their third-ever meeting in 2014, the Division II State Championship. Centennial dominated the first three quarters outscoring Liberty 20-0. Centennial would claim their fourth State Title in program history by a final score of 26-14.

The Lions would play spoiler in major games though, throughout the rivalry, defeating the ‘Yotes in the final game of the 2015 regular season in a late 34-33 classic, eliminating CeHS’ region title. Centennial would have the final laugh, winning the AIA’s 17-team Division I State Championship that season. Liberty also thwarted Centennial’s bid at a perfect season in 2017, once again defeating Centennial in the final game of the year, this time another late winning score 21-19. Centennial would once again laugh last, beat Liberty in the 5A Semi-Finals on their way to State Championship number six. These would be the Lion’s only two wins.

After a first-round out against Hamilton in the inaugural Open Division Championship this year, Centennial will be hungry in 2020 and both senior classes will ready for the bout that last took place their freshmen years. Hopefully, the Lions will still be able to face their natural rivals, Sunrise Mountain, to keep both rivalries alive.

Now this rivalry was much more surprising. For nine-straight seasons, Greenway and Cactus would take the four-mile drive down Greenway Road for an annual matchup against the high school just down the street. While it was lopsided with Cactus taking ten of the 11 games between 2005 and 2017 in football, it was an intense West Valley Region bout in other sports as well, such as basketball, volleyball, and softball nearly every year.

In the 2018 AIA realignment, Greenway was moved to the Skyline Region, where they have won the Region title the past two seasons. The victor of the last two West Valley Region titles was Desert Edge, who now moves to 5A. The West Valley Region drastically changes again with Cactus and Peoria being the only remaining teams from last season. This will be an intriguing region to watch as 2018 3A Champion, Northwest Christian, and Gila Ridge, move into the region.

The lore of Cactus vs Greenway still blended into the 2019 season as former Greenway Demon, Tyler Duncan, called Cactus’ field ‘home turf’ when he started as Arizona Christian University’s quarterback for most the season. Cactus literally owns the all-time record in this Glendale vs Peoria rivalry against Greenway, 20-4.

One more rivalry to note will be the return of Verrado vs Desert Edge. With the Scorpions moving from 4A to 5A, they rekindle a rivalry against sister school, Verrado, that met 11 times between 2009 and 2017.

Verrado opened in 2006, four years after Desert Edge, becoming the fourth school in the Agua Fria District. The ten-mile trip brings together a rising Verrado team and a much established, 4A State Runnerup, Desert Edge team. These two have also had some wild post-season meetings with back-to-back tournament matchups in 2015 and 2016.

In 2015, Desert Edge defeated Verrado in the DIII semifinals to earn a spot and win the State Championship. 2016 saw a wild season finale meeting as Verrado defeated Desert Edge by a double-overtime field goal game-winner by Jose Gonzales to end the game 6-3. They would meet the next week and score a few more points as Desert Edge got the last laugh in the first round of the tournament, 34-10.

And just like that our desert edge scorpions are heading back to state with a win over Verrado! 👏🏾🦂🎉🎊🎉🎊 pic.twitter.com/XMnH4ohoge

Game scheduling begins Wednesday, Jan. 29, and the initial schedules should be official by Feb. 18.