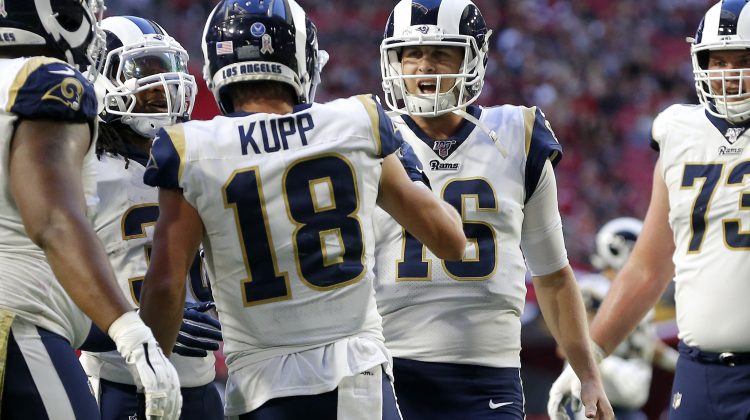 The Arizona Cardinals returned home for the first time in a month and were blown out by the Los Angeles Rams 34-7 in front of an announced crowd of 60,944 at State Farm Stadium. With the loss, the reeling Cards drop to 3-8-1, while LA improves to 7-5.

Here are five things we learned Sunday afternoon in Glendale

1. The Streak Continues…Kliff Kingsbury’s team is nothing, if not consistent. An early season three-game win streak has now morphed into an ugly five-game skid with the wheels completely falling off in front of their home crowd coming off the bye week. During the setbacks, you could point to both progress and effort in losses to quality opponents. That narrative changed quickly on Sunday against a team which played with far more urgency and purpose with their season potentially on the line. “Just wasn’t acceptable,” Kingsbury said afterwards. “First game we didn’t compete all year…we just weren’t very good.”

2. Bouncing Back…After a forgettable outing six days ago on Monday Night Football against the stingy Baltimore Ravens, Rams’ quarterback Jared Goff enjoyed the desert change of scenery and the spotty defense he faced with the roof open on a picturesque afternoon. Sean McVay’s offense did pretty much whatever they wanted and Goff’s hot hand spear-headed a 34-0 gashing before a mid-fourth quarter Kyler Murray touchdown run mercifully stopped the bleeding. “We would have liked to get more pressure on Goff,” Kingsbury explained. “He was getting rid of it quickly and we weren’t able to get there.” Goff’s final stats were quite 2018-like: 32-44 for 424 yards and a pair of touchdowns. He wasn’t intercepted and finished with a QB rating of 120.7.

3. Into The Woods…Remember the last time an NFL wide receiver was targeted 19 times? I don’t either. The always-dangerous Robert Woods was unstoppable hauling in 13 receptions for 172 yards. He was frequently seen running past or around various members of the back half of Arizona’s defense. It’s safe to say teams don’t fear going after Pro-Bowler Patrick Peterson, particularly because the Cards’ play so much zone coverage. The 547 total yards allowed are the third-most since the Cards moved to Arizona in 1988.

4. New Month, Old Problem…Fact: the Arizona Cardinals cannot cover tight ends in 2019.. With Rams’ starter Gerald Everett out due to injury, backup Tyler Higbee had the first half of his career reeling in seven receptions on eight targets for 107 yards and a touchdown. Regardless of opponent or venue, defensive coordinator Vance Joseph’s 3-4 unit has been flat-out horrible in tracking tight ends and this week was certainly no different.

5. Protecting Your Investment…It was as if LA was in the Cards’ offensive huddle the entire afternoon. Murray never looked comfortable completing 19-34 for a pedestrian 163 yards. He was intercepted once and sacked a season-high six times. “For me personally, I didn’t do a good job of sitting in [the pocket] and trusting it,” he explained. “I need to be better.” Could Murray be hitting the “rookie wall?” Maybe. With that being said, the Rams’ defense has dominated the Bird Gang the past few years and played out true to form again at State Farm Stadium.

The Cards will look to bounce back in their second of three-straight home games this month when they battle the Pittsburgh Steelers December 8th at 2:25.