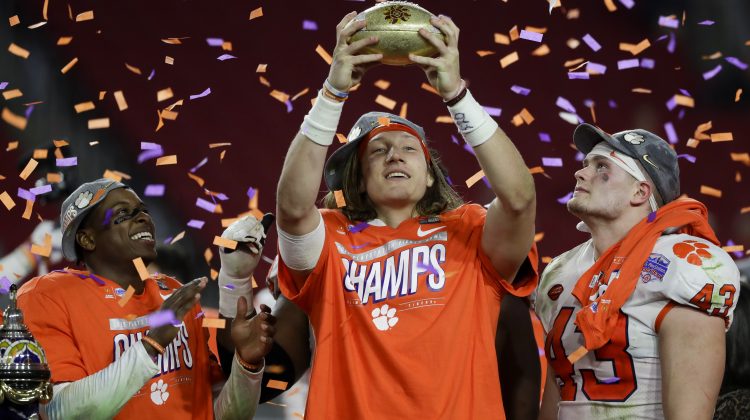 In front of a full house 0f 71,330 spirited fans at State Farm Stadium in Glendale, the Clemson Tigers punched their ticket to the College Football Playoff Championship for the second consecutive season outlasting Ohio State 29-23 to win the Playstation Fiesta Bowl.

1. Living Up To The Hype…If you love high-level college football, Clemson and Ohio State certainly didn’t disappoint. These two heavyweights traded punches on chilly night in the west Valley with the roof closed. The contest featured a slew of incredible individual efforts and a handful of momentum-changing plays with Clemson’s Nolan Turner picking off Justin Fields in the end zone late to seal it. “It’s hard to swallow right now,” OSU head coach Ryan Day said. Both well-coached teams made in-game adjustments but in the end, the defending champs had one more bullet in their gun. Seems only fitting the stadium, formerly known as University of Phoenix with a history of epic finishes, would host yet another.

2. Run Trevor, Run…While Trevor Lawrence’s passing numbers against a talented OSU secondary were solid, yet not spectacular (18-33, 259 yards, two touchdowns), many will argue the true sophomore star had equally as many big plays with his feet. His 67-yard touchdown run late in the second quarter not only pulled the Tigers closer (they trailed 16-14), it kept the forward momentum moving into the second half. He finished with a team-high 107 yards on 16 carries (6.7 yards per attempt) after rushing for 407 in the previous 13 games combined this season. What’s most scary is Lawrence, who’s one win away from another national championship, will be back for his true junior season in Death Valley next fall.

3. Fast & Furious…Ohio State made sure early there would be no repeat of the 2016 Fiesta Bowl, a 31-0 Clemson blowout of the Buckeyes, after star junior running back J.K. Dobbins ripped off a 68-yard touchdown run on OSU’s second possession of the game making it 10-0. Ryan Day’s team completely dominated the opening quarter on both sides of the ball, outgaining the Tigers 222-77 and eventually pushing the margin to 16-0 before the Tigers finally found their offensive footing. Dobbins rushed for 141 yards and a touchdown on just six carries (23.5 yards per attempt) in the first half. Dobbins missed some of the game with an ankle injury but returned in the second half. He finished with 174 on the ground and added six receptions for 47 yards. “He fought through it [but] I think it did affect his play,” Day said.

4. Flipping the Script…We noted above Lawrence’s nifty footwork. His partner-in-crime in the backfield, Travis Etienne, used his arms to make an impact when the Buckeyes contained his feet. After rushing for an even 1,500 yards and 17 touchdowns, the 5-foot-10, 210-pound junior managed only 36 yards on 10 carries but added two more scores on receptions, including the game-winner from Lawrence from 34 yards out with just over a minute to play. Etienne ended with a game-high 98 receiving yards on three catches.

5. Bigger Test Awaits…Clemson will take Saturday night and, maybe another day or so, to savor a hard-fought victory against an equally talented team but waiting on January 13th at the Mercedes-Benz Superdome is LSU who carved up Oklahoma in the Peach Bowl behind a record-setting performance from Heisman Trophy winner Joe Burrow (493 passing yards, eight total touchdowns). Many believed these were the two best teams this season. In a couple of weeks in New Orleans we’ll find out which will go down in college football immortality. If it’s half as exciting as what took place in the Fiesta Bowl, no college football fan will be disappointed.