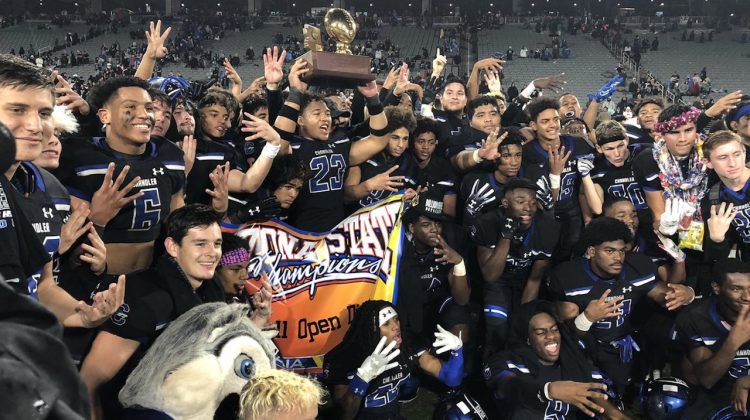 The Open Division brought up so many “dream” matchups for Arizona high school football fans.

Could Centennial bring their trench domination to the field with Chandler? How would Hamilton fare against a team like Saguaro? Could Salpointe Catholic beat some of the top teams in Phoenix?

But ultimately, it felt like the scenarios always led to one: Chandler taking the field with Saguaro.

The two teams hoist trophies with regularity and their top players help shape the college football landscape (and beyond) each year.

They are two of the most accomplished programs in the country.

Saturday, that “dream” became a reality.

The anticipated matchup felt like it could be one-sided after Chandler jumped out to a 21-0 lead in the 1st quarter, but Saguaro scratched and clawed their way back into the game over the course of the second half and made it a seven point game late in the 4th quarter.

But ultimately, the Wolves came away with the 42-35 victory, winning the inaugural Open Division Championship.

Dae Dae Hunter led the way offensively with 244 yards and two rushing touchdowns. Mikey Keene found Kyion Grayes twice for touchdowns and rushed for another, and defensive end Brandon Buckner took a tipped pass back for a touchdown.

Saguaro athlete Will Shaffer had three total touchdowns. Tyler Beverett found Denzel Burke for a long touchdown and Kelee Ringo rushed for a touchdown and recovered a fumble caused by Jacobe Covington that helped jumpstart the Sabercats.

Chandler can now boast they are the continued standard when it comes to Arizona high school football, and head coach Rick Garretson will have 19 starters returning next year. Meanwhile, the Sabercats showed they belong among the state’s elite programs no matter the division.

As for the AIA, they have a success in the Open Division.

Is it perfect? No, but it accomplished what it was supposed to and lined up two of the best programs in the state on the biggest stage.