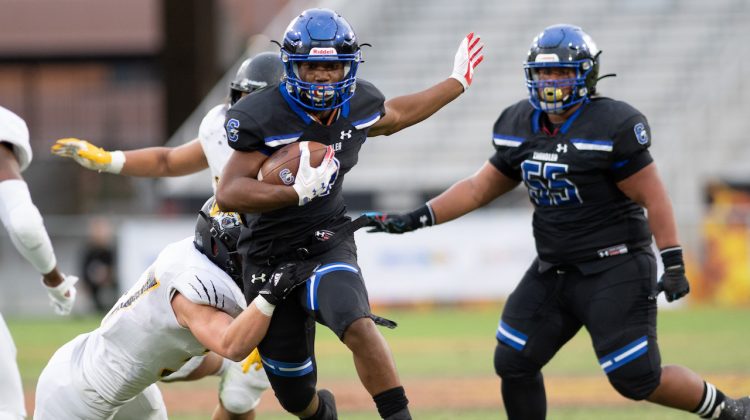 There are good first impressions.

And then there is the “hello” Dae Dae Hunter gave Arizona opponents in his first year in the state. The running back transferred to Chandler High School from Colorado and rushed to the tune of 1,748 yards and 34 total touchdowns in 13 games. He averaged 11.5 yards per carry and had seven games where he scored at least three touchdowns.

It’s one of the greatest premiere seasons for a player coming to the state, and Hunter is now headed to Hawaii.

BLESSED BEYOND MEASURES ! I’m 100% committed to the University of Hawaii 🤙🏾 pic.twitter.com/6gEGFhfo2U

He visited the Warrior campus last week and committed on Tuesday night.

Hunter helped lead the Wolves to their fourth straight state title and an inaugural Open Division Championship win over Saguaro, where he rushed for 279 yards and two scores after being limited in the semifinal game due to injury.

This is the second straight class Hawaii has earned a commitment from a Chandler playmaker. Linebacker Zach Bowers, who was a multi-year starter for the Wolves is currently a freshman within the program.

Lions punt downed inside 2. Cardinals lead by 3 in 4th Q
View on Twitter
0
1