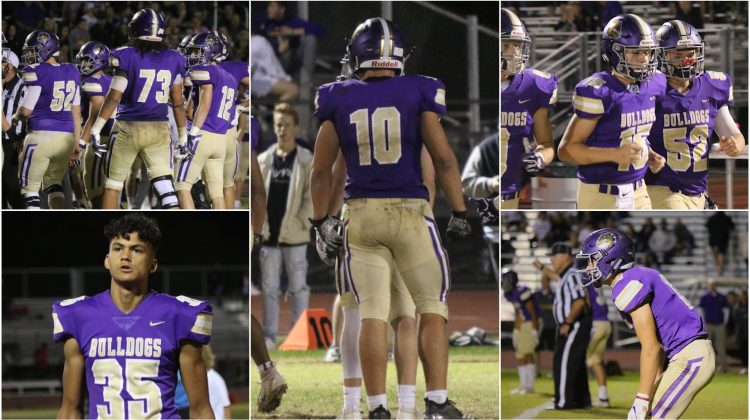 The fact that Queen Creek is making a deep playoff run this year is no different than previous years for the Bulldogs.

One of the things that is a little different than other years is the amount of recruiting attention this team has received from big time programs. As it stands right now, five players – four juniors and a sophomore – all hold Power 5 offers on the roster currently, and there are no signs of slowing down.

Reynolds has played multiple key positions the past few seasons – quarterback, running back, tight end, linebacker – and leads the team in rushing touchdowns and tackles. He is being recruited on the defense and holds offers from some programs with strong traditions on that side of the ball: Utah State, BYU, Wisconsin, Washington, Iowa State, Indiana, Washington State, Duke, Illinois and Arizona.

Barth is a dynamic athlete who is being recruited mainly on the defensive side of the ball but has made an impact as a wide receiver this year as well. In seven games, he has 221 receiving yards and two touchdowns along with 47 tackles and an interception on defense. His first offer came from USC, and since then, Iowa State, Duke, Washington State and Cal have followed suit.

Jackson brings a ton of length and versatility to the Bulldogs secondary, standing at 6’5″, 200 pounds. He has notched 72 tackles and two interceptions, one of which was returned for a touchdown. He currently holds offers from Boston College, ASU, Iowa State, Washington State, Arizona and BYU.

Glass has been a prospect we’ve seen over the years as a tight end and now shifted over as an offensive tackle. He’s the anchor of the offensive line and has received a ton of interest from Power 5 programs. Washington State was the first to pull the trigger and send an offer his way. Don’t expect that to be his last.

Brown took over the Bulldog offense after sitting out five games due to transfer. He has been hearing from multiple college programs and has an offer from Wisconsin, a team he is very, very familiar with.

The first helmet I ever put on was a Badger helmet. So amazing that I was just offered by the Wisconsin Badgers! I’m speechless, humbled and amazed. Thank you @CoachBudmayr so much! pic.twitter.com/brbmFwiZfr

He’s already checked out campus a few times and has heard from Arizona. In fact, Taylor Mazzone was one of many coaches on the Queen Creek sideline when the Bulldogs took on Boulder Creek.

The Bulldogs take on #1 Red Mountain in the 6A state semifinals on Friday.

Check out my feature on @SunDevilTFXC shot-put and discus king Turner Washington. He was a pleasure to talk to and has one heck of an interesting story to tell. Link below ⬇️ https://t.co/hPWL8DLNsN
View on Twitter

Sports360AZ @Sports360AZ
The 2017 Arizona Gatorade Player of the Year coming out of Canyon Del Oro HS, Turner Washington's change in scenery going from Arizona to ASU has paid big dividends for the @SunDevilTFXC standout. @EvanOscherwitz has the story: https://t.co/cGSpioxK9y https://t.co/H2FP5r6vRw
0
3