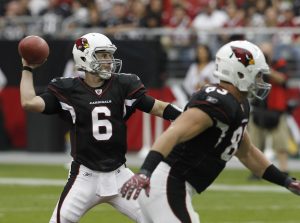 In five years as American Leadership Academy of Queen Creek’s offensive coordinator, the former Mesa Mountain View High star and Arizona Cardinals’ quarterback has helped create a football power. On Friday, the Patriots will attempt to win their second 3A state title since Hall’s arrival.

But there was a time where Hall’s coaching career appeared to be over.

In August 2014, Hall was arrested for shoplifting and possession of cocaine. This led to his dismissal at Gilbert High School, where he he served in the same position.

As much of a setback as this was, Hall did whatever he could to stay involved with football. The people closest to him helped make it a reality.

“I love the game of football; I need to be around it,” Hall said to Sports360AZ.com this week. “(Friends and family) helped me get through that situation and time in my life. Even when I got out of rehab, people were still reaching out and helping and trying to give me opportunities.”

A year after the incident, Hall got another chance. With just two football seasons under its belt, ALA chose Hall to be the Patriots’ new play caller.

After the stint at Gilbert and working on BYU’s staff as a graduate assistant, Hall saw this as another opportunity to develop as a coach.

“It was a blessing that this opportunity presented itself,” Hall said. “I thought, ‘this is a great fit for me.’ I always kind of wanted to be a coach.”

Since accepting the job, Hall hasn’t looked back. ALA won its first state title in school history in 2016 — his second season — and it also finished as state semifinalists in 2015 and 2017.

The 2019 season has been no different.

ALA is averaging 46.3 points per contest, helping the Patriots post a 12-1 record through the first 13 games. Each of those wins came by double digits.

While the offense’s production steadily improved throughout Hall’s tenure, he attributes much of this success to his players. “If your players are willing to put in the work and understand the offense and be able to execute it, then that becomes pretty fun as an offensive coordinator,” Hall said. “This is a great group of kids who are smart football players. Because of that, we’ve seen that on the field.”

Hall’s coaching expertise can be traced to his lengthy playing career. He started three seasons behind center at BYU and then played professionally in both the NFL and Canadian Football League.

Playing under so many different coaches, Hall has developed an offensive scheme around his prior mentors’ instruction.

“I’ve taken concepts and run game stuff and RPOs (run-pass-options) from all of those different things and I’ve molded it into my own offense,” Hall said. “I’ve figured out what high-school kids can do well and what they can’t do. And honestly, it changes year to year.”

Friday will be Hall’s second time coaching a State Championship game. The first time, in 2016, ALA cruised to a 31-14 win over Sabino.

Three years later, the opponent is rival Benjamin Franklin — the No. 1 team in 3A. More than anything, Hall just wants to see fight out of his team.

“No regrets,” Hall said. “Make this a game you feel good about, win or lose, walking out and say, ‘Hey, I gave it everything I got and I’m proud of my accomplishments I’ve had.”

No matter who wins the 3A title game, Hall’s instant impact on ALA is undeniable. He’s created a perennial contender and one of the best offenses at the 3A level.

For now, Hall is content with his current position. The former NFL signal caller has cashed in on his redemption opportunity and has rekindled with the sport he grew up on. But further down the road, Hall hopes his tenure at ALA is a stepping stone to coaching at the collegiate realm.

“When I get older and start to move on, I definitely think I might try to see if there’s an opportunity out there for me to move up,” Hall said. “I’m confident I can do that.”