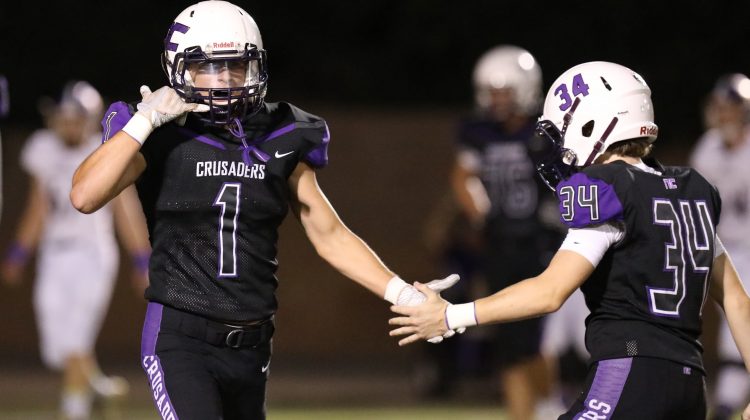 There are only four West Valley teams remaining in the 2019 State Tournaments, and all of them are in the semifinals looking to punch their tickets to their State Championship Games. Some are defending champs, some are looking for their first title, and some will travel great distances to get the job done.

Game of the Week: #3 Northwest Christian vs # 2 ALA – Queen Creek

A Saturday night showdown between two of the best in the 3A Conference will show if the Northwest Christian Crusaders are up to the task of becoming back-to-back state champions. The 10-1 Crusaders pulled off a tight victory last week against last year’s state runner-up’s, Yuma Catholic, by just three points.

Senior quarterback, Easton Meier went off again, throwing for 262 yards, four touchdowns and no interceptions in the win, earning a smooth QB Rating of 136 according to MaxPreps. Fellow senior, Cameron Adams was typically the benefactor of Meier’s gunslinging arm, racking up 183 yards and three of those four touchdowns. The offense has been electric this season, scoring 35 points or more in eight games in 2019. Now, this offense faces a team that hasn’t allowed any teams to score over 31 points all year.

The Crusaders are not done yet! Cameron Adams tip toes down the sideline for a long TD pass! 2pt conversion is no good as YC still leads 28-23 with 6:14 left to play. #AzReplay pic.twitter.com/0RTbttEJbE

The American Leadership Academy – Queen Creek defense has been suffocating in 2019. Junior, Micah Ferrin, has totaled not just 86 tackles according to MaxPreps, but also 24 tackles for loss and 11 sacks. Also, seven different players have totaled up 18 interceptions for ALA – QC, led by senior, Ben Strong with eight INTs and 153 interception yards. The offense for NCS must have a few tricks up their sleeves to sneak around the ALA Queen Creek defense. Even with a stellar air raid performance by the Crusaders last week, don’t forget they average nearly 240 rushing yards per game. Watch out for sophomore Grant Gibson and senior, Austin Young, to shine in the run game on Saturday night.

Players like Ben Strawn and Luke Rogaiski might get creative on Friday night as well on the defensive side of the ball. Strawn leads the Crusaders with 8.5 sacks while also picking up a team-leading 7 tackles for loss. Rogaiski has been a key defensively for NCS racking up four interceptions for the Crusaders totaling in 148 INT yards.

Whoever pulls off the win in this game will face one of two powerhouses on the other side of the bracket. The title game will be played at Campo Verde High on Nov. 29, just after Thanksgiving Day against either number one, Benjamin Franklin or number four, Snowflake.

Casa Grande nearly put a staple on their 2019 season, coming oh so close to ending the four seeded Desert Edge Scorpions’ playoff run on Friday night. A game-winning field goal by Matthew Alcerreca sealed the victory for DEHS, keeping them in the hunt for a title. After nearly being taken down by a powerful 12 seed, now Desert Edge must stop another team looking to make noise with another upset, the ninth-seeded Gila Ridge Hawks.

Gila Ridge has been on the road for every game of the tournament and traveled more in the tourney than most teams have traveled all year. The Yuma based team took down the 4A eight seed, Coconino, in Flagstaff in the first round, then upset top-seeded Sahuaro in Tucson, and now heads to Buckeye to battle Desert Edge at Buckeye Union High School.

The Scorpion offense has been rolling behind sophomore QB, Adryan Lara. One of the leaders on this squad has been senior receiver, Jihad Marks who has received for over 1,400 yards and 16 TDs, averaging 120 yards per game. Not only does the senior make for an endzone threat, but his talent also helps open up other options like junior, Andrew Patterson and sophomore Jeryll McIntosh, who both know how to get into the endzone. Gila Ridge typically ends up in close battles. The Hawks have had games decided by just three points or less on six occasions this year. Desert Edge’s offense proved on Friday night, if they need to squeak out a three-point win, they can do it.

The defense has also played well in 2019 pressuring the quarterback with 12 different players putting up sacks on the scoresheet. Be on the lookout for guys like Steven Ortiz who has disrupted offenses all year causing multiple fumbles and has picked up an INT. DEHS added two interceptions to their season total against Casa Grande in their 24-21 victory.

Desert Edge won the DIII State Championship in 2015 at Arizona Stadium in Tucson as the three seed and looks to advance to another state title game, this time in 4A. The winner heads to the 4A State Title Game, which will likely just be held at a high school, to take on the winner of Mesquite vs Cactus.

A Long Road to the Championship

Speaking of Mesquite vs Cactus, the Cobras are essentially the only high seed in 4A or above playing what seems like a road game. The second-seeded Cobras will travel nearly 40 miles to Youngker High to take on the Mesquite Tigers and hotshot quarterback, Ty Thompson.

Thompson has offers to play college football next year at Arizona, Arizona State, Cal, Iowa, Miami, Boston College, and plenty more. His throwing ability has caused 39 touchdowns and over 3,300 yards worth of passing. The young junior QB averages over 300 passing yards per game and is coming off a tight 27-26 win over Marcos de Niza.

The Cobra defense must make the Mesquite offense one dimensional and take their chances with senior, Chris Hintze who has totaled 746 rushing yards and six TDs, being MHS’s only offensive weapon. Thompson has thrown 12 INTs in 2019 and the Cactus defense must capitalize. The Cobra defense has seen nine different players sack the opposing QB and ten different defenders pick up interceptions. The Quinones brothers are referred to as the heart and soul of this team and will look to swipe the heart and soul out of the Mesquite offense with a combined 5 INTs, 7.5 sacks, and 16 TFL this season.

Cactus has been streaky offensively in 2019 but has arguably played their best football of the year in their past ten quarters of action this year. After getting shutout in the first half of their season closer against Peoria, Cactus has outscored opponents 97-13. If the offense can keep rolling like they have against Tempe in the first round and Peoria this past Friday, Cactus will have more than a chance of keeping up with Mesquite.

Love this staff. We’re very close and it’s been a blast this season! Time to close the show and make it to the championship! pic.twitter.com/hV2N4uphX1

The Cobras have locked in their first ten-win season since last making the State Championship in 2011, falling to Saguaro at the NAU Skydome. This storied program would see their eighth championship appearance with a win on Friday night. The victor of this match will battle the winner of Gila Ridge vs Desert Edge.

Rushing Along the Trail

Since it’s opening in 2006, the Liberty Lions have once made the State Championship game. In 2014, the Lions faced sister school, Centennial, in the 5A title game at Sun Devil Stadium but fell just 12 points short of scoring their first state championship.

With a 45-28 routing of 15 seeded, Mountain View (Mesa), the Lions set a path for Mountain Pointe High School to battle a high octane Desert Vista Thunder team. The east valley school is 9-3 on the season and coming off a ridiculous 70-63 victory over the 2018 6A Runner Ups, Perry. The Thunder is led by their gunslinger of a quarterback, Parker Navarro, who has thrown 28 touchdowns over 2,525 yards in 2019 while racking on nearly another 1,000 rushing yards as well.

The Lion defense better be licking their chops at the matchup knowing Navarro will constantly look to throw. Sophomore, Jax Stam, will look to lead the charge in the secondary searching for just Navarro’s sixth INT of the season. Navarro has hit fellow senior Elijah Ervin 18 times this season for touchdown passes. The Lions have picked off the opposing QB ten times in 2019 led by senior, Shane Pitts, with four. If the secondary does put a stop to Navarro and Ervin, the defense’s job isn’t done. They’ll still have to stop a lethal Grubbs duo. Devon and Tyson Grubbs have accounted for nearly 1,500 rushing yards and 18 touchdowns combined this season.

The Lion offense will be charging if their rush game works anything as it did against Mountain View. Senior, Joseph Forney, couldn’t be stopped, bulldozing MVHS for three touchdowns and 154 yards. Freshmen Zaccheus Cooper has also emerged since returning from injury rushing for another 145 Lion yards in the victory. And don’t forget about the tricky senior QB, Jonah Guevara, who rushed for two TDs as well.

Whoever takes the win in this game will take on either top-seeded Red Mountain or the four seed, Queen Creek, in the 6A State Championship at Sun Devil Stadium.

There’s going to be some crazy games this weekend, so be sure to go out and support your teams. Also, join the conversation on Twitter using #FridayNight360AZ.

Round two is about to get underway!! Started with a moment of silence for the tragic accident that happened this morning at Peoria. @CHSCobraFB @PeoriaPantherFB #FridayNight360AZ pic.twitter.com/7BFOc34dQG