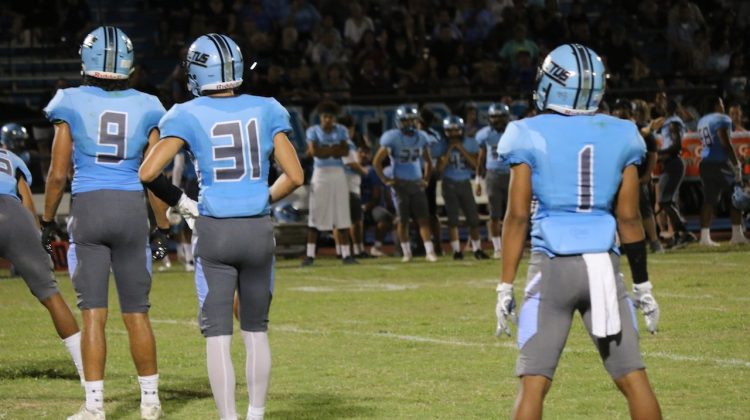 This week is interesting. There are plenty of great games happening this week on the west side. Rematches or rivalries, former state championships, and bouts from earlier this year. Most importantly though, it’s the semifinals. Time to prove you belong and make that push one step closer to the championship games.

Just two weeks following a classic rivalry battle, one of the greatest rivalries west of the I-17 will commence for the 35th time. On Nov. 1, Cactus rallied 20 unanswered points in the second half to take down the Panthers 20-14.

If the Panthers want to turn the tables on Cactus, the offense needs to awaken. Jovon Scott kept Peoria in the game making impeccable catches and yards after the catch, racking up nearly 200 receiving yards. Scott will undoubtedly be the superstar of the offense again, but if this team really wants to make a dent, the run game has to make noise. Sophomore, Cameron Mack, played well until the second half when the Cobra defense put a stop to the Panther run game only leaving Mack with 76 rush yards. While that isn’t a bad number, the youngster is certainly capable of putting plenty of yards on the stat board.

Cactus’ key to winning the rivalry bout twice in a single year is the receiving room. The first half of Cactus vs Peoria looked depressingly much like the offense against Desert Edge that only scored six points in the first three quarters. The Cobras were held scoreless in the first half against Peoria and opened the floodgates in the fourth quarter. While Antonio Pratt made for a good game with 49 yards from only four receptions, there were simply too many dropped balls all across the field, stalling the Cobra offense. Quarterback Conner Cordts completed just 12 of 26 passes last game against Peoria but not all the incompletions were to his fault.

Both defenses played well in the last meeting and both squads picked off the opposing quarterback and sacked them as well. The amount of pressure both teams put on the opposing offenses were quality and looked to last most of the game. If these defenses do their jobs just like they did two weeks ago, then it’s up to the offenses to battle back.

The winner of this game will take on the winner of Mesquite vs Marcos de Niza in the semifinals, one step closer to putting their names in the record book as 4A Conference champions.

Best of the Best

Centennial is constantly the quiet champions. Even though the seven-time state champions are consistently one of the best teams in the western United States, you can’t help but feel like this team gets slighted, even in a tournament of the eight best teams in the state. Centennial is the second-ranked team in the Open Division Playoff and battles Hamilton. To be honest, seeding really doesn’t matter in the Open Eight. Every single team could beat any other team on any given night, they’re all just that good.

Hamilton is a great example. In any other tournament, a two vs a seven usually looks one-sided in the two’s favor. In this case, though, the seven nearly beat the best team in the state, Chandler, to close the season. The first thing Centennial needs to stop on the Huskie offense is Brenden Rice. Don’t let the fact he only has 686 receiving yards fool you, it’s tough to get yards when teams are always triple-teaming you. Rice is committed to Colorado and is one of the best at making acrobatic catches and finding yards after the catch. Gabriel Armenta will be tough to stop running on the turf as well with his 18 TDs in 2019. Centennial’s senior, Seth Lane could be the name you hear a lot on defense, leading the team with 12 tackles for loss and has also accumulated 11 sacks. Also, be on the lookout for DJ Gleash who has an INT, blocked punt, and 13.5 sacks.

Coyote QB, Jonathan Morris, must flip the switch. A total of 1,600 pass yards through ten games is impressive but this offense hasn’t seen a lockdown defense in weeks after beating region opponents by an average score of 54-0. The offense has a boatload of weapons, watching 15 different ‘Yotes enter the endzone this season. One of the most lethal weapons has been Jaydin Young, not only catching three touchdowns this year but he can also drive the ball through the goal line with another eight touchdowns credited to his rushing. Very few players on the starting lineup have had to put in a tough 48 minutes of game action over the past couple of months, but this week, Centennial will need every player giving 100% for at least 48 minutes.

Centennial Student Section we need you loud on Friday. The Centennial Packbackers will be paying for the 1st 50 students to enter the game and sit in the student section seating. You must show your student ID. Meet at the East entrance starting at 6pm. pic.twitter.com/1y5VXZy6Ue

The winner of this game gets to battle against the victor of Horizon vs Saguaro (Scottsdale).

Even though they’re ranked just fourth, Desert Edge is certainly a favorite to win the 4A Conference championship. While names like the number one seed, Sahuaro (Tucson) and second seed, Cactus are still in the mix, the third and fifth seeds are not. Desert Edge’s challenge in the second round is to take down the team that upset those two seeds in the past two weeks, Casa Grande.

The Cougars of Casa Grande took down Canyon Del Oro in the final game of the year, bouncing the Dorado from the top seed to the third seed going into the tournament. Then last week, CGHS upset the fifth seed, Walden Grove in the first round. With all the momentum in the world, Casa Grande is ready to be dubbed “the 4A Giant Slayers.”

To claim that title, Casa Grande must take down one of the best teams out west, the Desert Edge Scorpions. DEHS nearly shutout Prescott last week, 37-7, and is hungry for another semifinal appearance after they were dominated by Saguaro (Scottsdale) last year. The Desert Edge offense has been miraculous behind sophomore quarterback, Adryan Lara, who has converted 35 touchdown passes in 2019. Receivers Jihad Marks and Andrew Patterson have collected over 1,000 reception yards this season and sophomore Jeryll McIntosh as rushed for nearly 1,000 yards himself.

Part of what makes Casa Grande deadly is their slew of rushing talent. Three different Cougars have rushed into the endzone six or more times. DEHS defensemen like RJ Roberts and Cris Contreras will be up to the task of stopping CGHS from pounding the ball through the defensive line. The winner will take on the victor of Gila Ridge vs the 4A’s number one seed, Sahuaro (Tucson).

A Rematch of Major Proportions

An upset in the first round sparked a rematch of the 2018 3A State Title game and a match earlier this year as Northwest Christian will take on Yuma Catholic. This season feels very different from the previous, though. Last go around, these two were the top two ranked teams in the 3A Conference, this time the Crusaders at NCS are ranked third and the Yuma Catholic Shamrocks are eleventh and had to upset sixth-ranked, Valley Christian last week.

These two teams met back on August 30 in Yuma resulting in a shocking 45-17 Crusaders domination. Senior, Austin Young, commanded the turf, rushing for 221 yards but sophomore, Grant Gibson, would be the sludge hammer to get into the endzone scoring four times rushing.

Since the loss, the Shamrocks lost three more times. While YC has caught their footing in the past three games, they’ve squeaked out close victories against Odyssey Institute and Valley Christian, winning by just single digits.

Yuma Catholic will be out looking to avenge last years’ team that lost in the title game and to make up for their blowout loss earlier this year. Defensively for Northwest Christian, YC’s senior quarterback, Gage Reese will still be hard to beat. Reese still managed to throw for over 200 yards in their loss to Northwest Christian but was intercepted by Cameron Adams and Luke Rogaiski and sacked by Ben Strawn and Luke Johnson.

Whoever triumphs this game will take on the winner of Sabino vs American Leadership Academy – Queen Creek.

One game that we unfortunately weren’t able to take an in-depth look at is 8 Sunrise Mountain taking on 5A’s number one, Williams Field. These two already met this year and was actually a victory for Sunrise Mountain 38-35. We’ll see if the Mustangs pull out some magic and upset the top seed. With plenty of big games this week, be sure to go out and support your teams and join in on the conversation using #FridayNight360AZ.