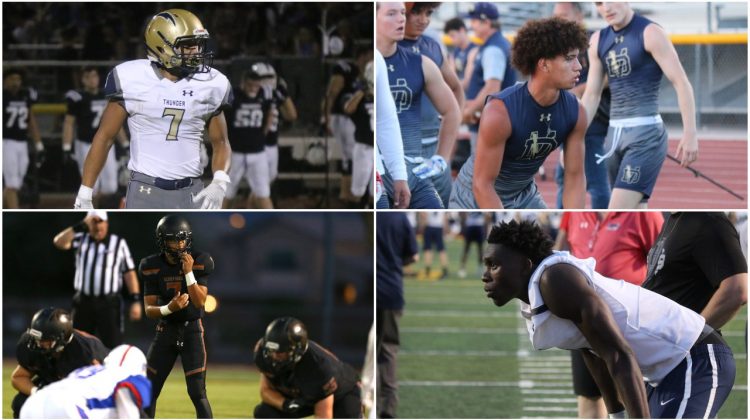 It’s a busy time of year so I wanted to provide some recruiting updates on a few top players around the country:

Tyson and Devon Grubbs are two of the top running backs in the state and have been having a great year for the Desert Vista Thunder. Tyson, a senior, is leading the team with 635 yards and nine touchdowns. He broke down his season so far and a few schools pursuing him heavily:

Devon, a sophomore, took over the rushing attack last year when his brother went down due to injury. He discusses how being thrown into the fire, with some brotherly advice, has helped him develop as a running back and the ASU offer that came his way this offseason.

Adryan Lara is in year two as starting quarterback for Desert Edge, and the sophomore says he’s already seen a huge difference in his play and the speed of the game. In 2019, he’s thrown 24 touchdowns and eight interceptions. He talked about the Arizona offer he picked up recently and a few other recruiting updates.

Higley defensive end Jason Harris has had a good few weeks. He is not only the leader in sacks in the state (despite missing a few games due to injury), but he just got his Under Armour All-American jersey on Thursday. He also recently visited Texas A&M to check them out against Alabama, and the Aggies made an impression.

The lone school to make it in Harris’ top six that is outside the Pac-12 showed an atmosphere that he would love to play in.

“It would be exciting, being in the crowd and the atmosphere, being in a whole other level of excitement,” Harris said. “I just felt a rush…The crowd was really fun to be around.”

Defensive ends coach Terry Price has been speaking with Harris extensively about how he could fit in the Aggie defense, and the defensive end would focusing on pass rushing and dropping back into coverage.

Harris has already taken an official to Arizona, and will be at Colorado November 9th against Stanford and at Oregon on November 16th against Arizona.

He plans to make a decision in December and put pen to paper on early signing day.