Although 130 miles separates Pinnacle High School in the north Valley and Salpointe High School in Tucson, the close friendship of Marcus Libman and Lathan Ransom was actually born much further away along the southeast coast, when both were in elementary school.

“In Florida is where I first really met him,” the senior PHS wide receiver Libman said to Sports360AZ.com. “I was like, ‘man, this kid’s good.’”

The two were playing for opposing flag football teams but had competed against one another in Arizona when their paths crossed again in the Sunshine State.

“He was good,” Ransom, the Ohio State safety commit explained with a smile to Sports360AZ.com. “He was good back then, too. He and I have a great relationship. I see him ballin’.”

Part of that great relationship stems from their mirror personalities. Both are smart, funny and outgoing away from football, but all business between the lines under the Friday night lights.

As they’ve gotten older, their respect for one another as both friends and players has grown, as well.

“We train together and we push each other,” Libman, a future Division-I player himself, said. “It just shows me how much more technique I have to use and how much harder I have to go to really be up there with him.”

For Ransom, the top-rated safety on the west coast, it’s also the perfect setting to sharpen his craft against a top 6A receiver who has 21 touchdown catches and close to 2000 receiving yards in less than 20 varsity games.

Came in this world and we lookin for murda 🦍🗡 pic.twitter.com/aa7uSorLIq

“He catches everything,” Ransom said of Libman. “He [doesn’t] drop a pass. He has some of the best hands I’ve ever seen.”

With all the work, also comes play. 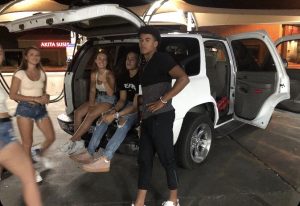 The most notorious one was when the two were traveling to a party together when “Libby” was “showing off” accorinding to Ransom by swerving through a series of roundabouts when he accidentally hit one, popping a tire and leaving the group stranded at a remote gas station for over an hour.

In the end no one, outside of the tire, was injured and the two still laugh about it to this day.

After all, boys will be boys.