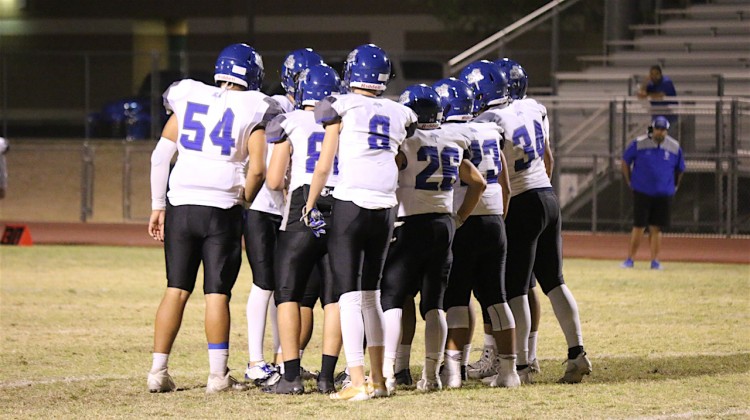 As the tail end of the year starts to come by, region titles are getting clinched. This week, two west side schools can clinch a region title and bring momentum to a playoff push. While a 6A or 5A region title no longer awards an automatic spot in the state tournaments, the other conferences still saves top eight seeds in the tournaments for region champions.

50-0. With a win on Friday night, that would be the region record of the Westview Knights since their 2010 campaign.

10. That’s the number of seasons the La Joya Lobos has missed a state tournament in a row.

These two streaks could be reaching a breaking point when the two teams meet on Friday night. Westview has dominated the 6A Southwest Region for nearly a decade and has made constant tournament appearances over the past two decades. To reach 50 straight region wins, they have to tackle a La Joya team, who with a win can end the Knight’s reign of the region.

This punter about that TRUCK STICK life 😳 (via @Tr3Lefebvre) pic.twitter.com/Llw0dJdgfX

It’s been a rollercoaster of a ride for the Lobos in 2019, but at the end of the day, they’re in the hunt to get a state tournament spot in the 6A Conference. One consistent aspect of this team is that Miguel Valdovinos has been throwing missiles. The senior QB is averaging nearly 300 pass yards per game and has collected 33 touchdowns in 2019. The squad loves to look downfield or to make chunk plays with five different receivers making season-long catches of 30 or more yards. Junior, Israel Yturralde, leads the Lobos with 12 touchdown receptions on the year.

The Westview quarterback has had a much more balanced outlook on the season. Nick Vasko has excelled through the air with over 1,600 yards and 20 TDs, but he also has averaged nearly 100 yards per game rushing, racking up an extra 9 touchdowns. While the Knights may certainly need to keep up offensively with La Joya, defensive stars will need to step up to quiet down the Lobo pass game. Alejandro Barba leads the Knights with 59 total tackles and eight tackles for loss. Also, be on the lookout for junior, Dhayven Valentine, who has collected four of the Knights five interceptions this season.

Last year’s game was a 37-14 victory for Westview on their way to close out an 8-2 season. In 2019, these two teams have nearly identical scores in their games against common opponents. With a win and a loss by Valley Vista, Westview would clinch their ninth straight region title. A La Joya win would mean the Lobos clinch the region, and possibly lock them into the 6A tournament. There’s plenty on the line in this game and could be one of the best shows in the valley this Friday night.

A Bid Into the Tournament

Somehow Greenway and Tempe are in the same region, but regardless, these two meet for a 4A Skyline region championship-deciding game in Ween Nine for the second straight year. This season, the Buffalo’s from Tempe head northwest to battle the Greenway Demons who won this meeting and the Skyline Region last time around.

The Demons have certainly exceeded expectations with their roster full of youth. Sophomore quarterback, Aodhan Murphy has remained steady passing the ball, averaging over 100 yards per game. Their offense has been on rails behind junior running back, Christian Johnson, who has racked up 20 touchdowns on the turf and over 1,300 rush yards this season. Johnson has rushed for at least 130 yards in every game besides the team’s one-point loss to Buckeye Union. The Greenway offense has averaged 34 points per game and they’re only getting better.

Besides giving up 21 points in a 34-point win against Shadow Mountain, the Demons haven’t allowed more than 14 points scored against them. The senior leadership from Colton Johnson has shown great production on the field. The senior leads the team with 10.5 sacks while also collecting 13.5 tackles for loss. As a team, Greenway has picked off 16 interceptions as well. GHS must stop Buffalo RB, Jabree Richardson, who has over 1,000 rush yards per game. Three other Buffaloes average over 20 yards on the turf as well.

A win for Greenway doesn’t just mean back-to-back region titles, but also a lock into the 4A State Tournament. While both teams both could make it in, they’re both on the bubble, making an automatic bid extremely valuable. Last year, Greenway squeaked out a 6-0 win. We could be witnessing another tight grudge match once again in 2019.

Mountain Ridge has been impeccable this year. A 5-3 season has included wins against Westview and Liberty, both tournament teams last year and potentially this year. Now they face another team who made the 2018 state tournament, Boulder Creek.

The Mountain Lions are coming off a bye after a difficult loss to Open Division contender, Pinnacle. A win on Friday night against Boulder Creek would give them 6 wins, their most in a season since finishing 8-3 in 2010. Part of that has been behind productivity from senior, Tommy Ellis. He’s racked up two interceptions, two blocked punts, 12 tackles for loss, and over 100 tackles according to MaxPreps. Defensive productivity would certainly be helpful against a team that just scored 37 points against Desert Vista last week.

Boulder Creek has lost four games in a row. All four of those teams are top ten in the 6A Conference. While it’s certainly difficult to take on that many juggernauts straight, teams learn from tough matchups. That was on display against powerhouse, Desert Vista, where the Jaguars scored 37 points and lost by only eight. Juniors, Bear Milacek and Jacob Cisneros, both figured out how to roll offensively. Milacek threw over 200 yards and 4 TDs in that game while Cisneros rushed for nearly 250 yards, finding the endzone twice. What this team has learned in the past four games could help them take down the Mountain Lions.

After a fumble recovery, @BCJagsFootball moves fast to score. I only was able to catch the tail end of it, but here’s @AzQbBeAr6’s pass to #22 @dominicwright22! They cut the lead to 35-23 #VXLive #BCvsDV pic.twitter.com/zYhImiStC7

As MRHS continues to climb in the rankings, don’t even consider this team will likely make a state tournament for the first time since 2010, consider that they might be good enough to host in the first round and make a run for the state title game just one year after being 0-10. Boulder Creek’s current 3-5 record against stout opponents could still get them into the tournament, especially with a win against this rising Mountain Ridge team.

For the past ten years straight, the Buckeye Union Hawks have owned their district battle against the Youngker Roughriders. The Hawks have an opportunity to make it 11 in a row if they can pick up their fifth win of the year on Friday night on the Roughrider’s field.

Buckeye Union is coming off a tough 14-13 loss at Gila Ridge last week. Their team has been led by senior rusher, Zeke Barajas, who has totaled over 100 yards per game. The Hawks have already surpassed their win total from last year and are looking to get back to the 4A State Tournament after missing the party last year.

Junior defender, Julian Montoya has been a standout for Youngker. With four interceptions, Montoya has collected 60 yards from INTs, including a pic-six. If the Roughriders want to end the streak, the defense must fight strong. Youngker looks for their third win of the season in their final home game of the year.