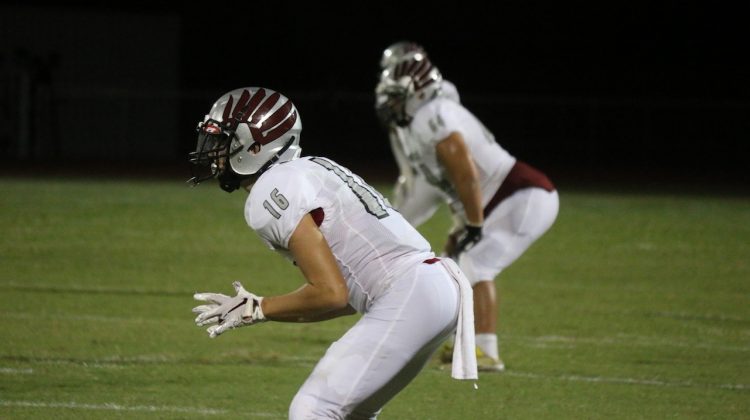 We’re getting into crunch time as region play arrives and Week Ten draws closer. It’s time for teams to get to their top level and make a push to the state tournaments.

A PUSD battle could have major tournament implications as Ironwood and Sunrise Mountain collide for their 5A Northwest Region matchup.

A headliner for this game will be the dynamic quarterback play. IHS’s Will Haskell and SMHS’s Alexander Gianoli are responsible for over 2,000 combined yards of offense and 36 passing and rushing touchdowns, and only an interception each. The Mustangs’ senior, Gianoli, has watched his offense score 38 points or more in four of their five games in 2019 including a 41-6 victory at Verrado last week. Now with Sunrise Mountain back home, they welcome Ironwood junior QB, Haskell, and the rest of the offense who has outscored their last three opponents 124-32.

The Eagles are 4-1 with their lone loss against fellow sister school, Cactus, in a tough 28-20 game. Sunrise Mountain sits at 3-2 after falling to rival, Liberty, and a high octane 50-47 loss at Gilbert. While Haskell will continue his offensive theatrics to carry Ironwood into the endzone, the Mustang defense has to step up on the front line. According to MaxPreps, only Micah Scott has accumulated multiple sacks in 2019 and Tommy Arnold is the only athlete with over 20 tackles.

With both teams entering region play, this game could set the foundation of where the squads land in the 5A tournament. Sunrise Mountain made a run last year that was cut short by Williams Field, but the Eagles are on track to make their first postseason appearance since 2011 after missing it by one spot last year.

While the Saguaro Sabercats were ranked outside a qualifying spot to make the AIA Open Division Playoff in the first rankings, everyone in the 4A Conference knows who the big cat in town is. Before Saguaro enters their remaining Desert Sky Region schedule, they face the Desert Edge Scorpions, the only 4A team to finish within 35 points of the Sabercats after the final whistle last year.

DEHS only lost by 17 points in their regular-season meeting last year, giving the Scorpions hope they could face Saguaro with strength if they met in the state tournament. Fate would have it they would meet, but Saguaro had the nitro cranked up and blew away Desert Edge, 61-6. After AZPreps365 ranked Saguaro outside the Open Eight as the ninth-best team in Arizona, the six-time defending 4A champions might have some extra juice this week to make a statement at the cost of Desert Edge.

Even though DEHS sits at a strong 4-2 record with only losses to Open Division contender, Salpointe Catholic, and 5A school, Millennium, they opened the rankings at seventh in the 4A Conference.

Desert Edge could rain on Saguaro’s parade as they fight to prove they belong in the top eight in the AIA’s algorithm. The Scorpions could be up to the task of upsetting Saguaro if the defense puts up the fight of their lives.

It’s been a tale of two very different seasons between Verrado and Agua Fria. The Owls of AFHS started the season off on a roll winning their first four games, scoring over 50 points in three of those matches. Meanwhile, the Verrado Vipers are on a four-game losing streak after winning their season opener.

Agua Fria suffered their first loss of the season last week to Sunnyslope and are looking to bounce back, but it won’t be as easy as the overall records make it seem it could be. Verrado’s four losses all came against teams who were all top ten seeds in last year’s 5A State Tournament. While it’s still an “L” on the scoresheet, quality losses matter. Tough games against tough opponents make teams better.

Both teams have shined rushing the ball this season. Agua Fria senior, Jalen Williams-Fuller, leads the team in all-purpose yards. Just as junior, Logan Gingg, is doing as the running back for Verrado. Agua Fria will also look for their defense to step up which has racked up 11 sacks and nine interceptions.

Both of these teams open Desert West Region play against each other. This could be a ground and pound battle on the turf in what could be the most neck-and-neck game either of these teams will see in the region.

Some would say this game is about hosting the number four ranked team in the state. Others would say, it’s just another region opener. Regardless of what you call it, Sandra Day O’Connor gets that opportunity on Friday night against the Pinnacle Pioneers.

It’s been a brutal 1-4 start for SDO playing the likes of Basha, Perry, and a top-five school in Hawaii, Campbell. Their lone win was a 50-point blowout of Mesa to open the season. The Eagles are coming off an intense battle against Boulder Creek to open region play last week against Boulder Creek. Damian Ortiz scored the lone touchdown for O’Connor but the team gave up the go-ahead touchdown with about nine minutes left in the game.

A bounce-back would be tough but not impossible. The number one component any team must have to beat Pinnacle is a way to stop future Michigan Wolverine, J.D. Johnson. While the senior quarterback has thrown over 1,000 pass yards this season, he’s also let the ground game take action with the team totaling over 800 yards rushing as well.

Watch out for the big men on the front line to step up and lead this defense to keep the Eagles in the game. Seniors Chase Folkestad and Reed Butorac both have 4.5 sacks each in 2019 and will be vital in pressuring Johnson while keeping the run game at bay. The entire Desert Valley Region is a difficult schedule and upsetting a top team would be a great way to get the team on track to make a final push to the postseason.

There is plenty of football in action, so be sure to go support your team and don’t forget to use #FridayNight360AZ to join in on all the talk under the lights!