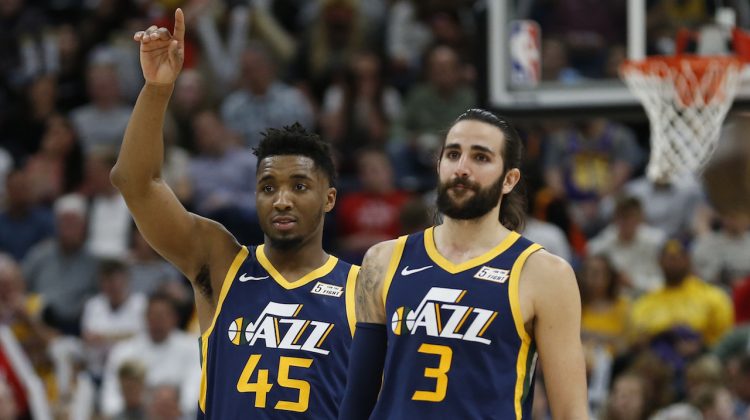 With eight seasons under his belt, Rubio has averaged 11. 1 points, 4.2 rebounds and 7.7 assists while accumulating 1.9 steals. He was drafted fifth by the Timberwolves in 2009 with hopes that he would be Minnesota’s point guard of the future. For the first five years of his career, Rubio struggled to shoot the ball. It wouldn’t be until the 2016-2017 season – his last season in Minnesota –  that he would shoot a below-average 40.2 percent from the field.

For what he lacked in shooting, the former Timberwolf made up for in his ability to shoot from the line, be a facilitator and disrupt the passing lane.

The Spaniard would find himself with the Utah Jazz for the next two years as a key impact player, especially heading into the postseason. During the regular season Rubio’s points per game and rebounds per game increased. His three-point shooting percentage was the best it had ever been shooting at a rate of 35 percent from the arc.

Rubio’s play contributed to Utah making the postseason as a member of the Jazz. For his first taste of the NBA playoffs, the Jazz faced-off against a formidable looking OKC Thunder squad that included the likes of Carmelo Anthony, Paul George and Russell Westbrook. Ricky Rubio went on to average 14 points, 7 rebounds and 7 assists while averaging around a steal per game.

A Rookie Donavan Mitchell, at the time, said himself that Rubio’s skillset is “Huge. He’s been our vocal leader. He’s the guy that knows the offense. He’s a pass-first point guard who’s taken over a load offensively when he has to.”

Rubio would not play in the second round of the 2018 playoffs due to an injury that kept him sidelined.

The Jazz would go on to lose against the Rockets.

In the 2019 postseason, and Ricky Rubio’s numbers would increase, once again. Rubio’s points increased to 15 points per game, his assist numbers rocketed from 6.1 in the regular season to 8.6 in the playoffs. He also tied his career steals averaging 2.4 steals per game.

If we’re talking about Rubio’s impact, just look at the 2017-18 postseason. With the addition of Rubio, the Utah Jazz saw point increases from players such as Donavan Mitchell, Joe Ingles, Rudy Gobert and Derrick Favors due to Rubio running the offense. Mitchell’s PPG increased from 20.5 to 24.4. The same happened with Joe Ingles; 11 PPG increased to 14.5 in the postseason.

Rubio gained more control of the ball in the postseason. When he had full control of the offense, pressure rose off of guys like Donavan Mitchell and Joe Ingles, which gave them better opportunities to score. In addition, Rubio’s passing also made up for 18.3 points created off assists for the Utah Jazz in their postseason run.

Ricky Rubio may have taken up a majority of the Suns’ available cap space, but he is a solidifying piece for an organization who has struggled to find a point guard.

For the past three seasons, Rubio has been ranked among the top 15 point guards in the league with the highest Defensive Plus/Minus rating.

After Utah fell to the Rockets again in the 2019 playoffs, Ricky Rubio became an unrestricted free agent. Which brings us back to Phoenix signing him for three years, $51 million.

What have the Suns been lacking over the past ten years? Playoff experience. Leadership. A veteran presence. Ricky Rubio brings all these factors to Phoenix. It may have only been for two years, but in that stint Rubio solidified himself as a key contributor that could be relied on for any team.

The Suns have relied on players like Devon Booker, T.J. Warren and Deandre Ayton to fix the Suns, but they’ve been missing a key piece in their rebuilding process that has taken place since 2011. That key piece could be Ricky Rubio himself.

To assume that the Suns will turn things around because of this signing is too much to ask for. However, here’s what this move does offer to the Suns moving forward:

Devin Booker put on a show last season. He was the main source of offense for the Suns and worked as the facilitator leading the team in points and assists per game — which also made him a target.

With the addition of Ricky Rubio, the pace of the Suns offense will be more controlled. The offense itself will flow better when the ball is in the hands of a pure point guard rather than a shooting guard doing double the work.

Rubio’s expertise will create opportunities on offense for players like Kelly Oubre Jr. and Deandre Ayton. Coming from a winning culture in Utah, Rubio will give pointers on how the younger players can adapt in in-game situations while learning to play as a collective unit.

The Phoenix Suns begin their season against the Sacramento Kings on Oct. 23.