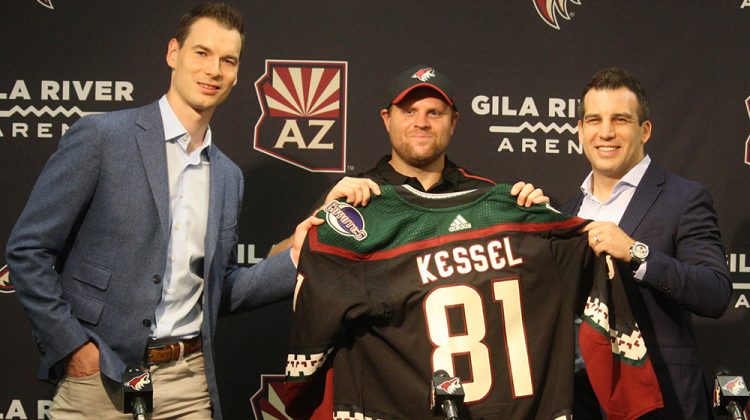 After a high-profile trade at the end of June, three-time NHL All-Star Phil Kessel was officially announced as an Arizona Coyote on Tuesday morning at Gila River Arena.

The 13-year veteran has tallied 30 goals or more in six seasons between the Boston Bruins, Toronto Maple Leafs, and Pittsburgh Penguins, as he looks to fill the void that the Coyotes organization was trying to address this offseason in the scoring department.

“Describing Phil, he’s one of the most prolific goal-scorers in the National Hockey League and a two-time Stanley Cup Champion,” said General Manager John Chayka. “It’s someone that would fit in well with our players and our coaching staff, and he addressed a direct need of our team.”

Among the topics discussed were Kessel’s resume, what he looks to bring to the organization, and his relationship with head coach Rick Tocchet, who was Kessel’s assistant coach with the Pittsburgh Penguins from 2014-17 on two of the franchise’s Stanley Cup runs.

“I don’t know how it’s going to work. We are good friends and we get along great,” said Kessel of his relationship with Tocchet and how it will change now that he’s his head coach. “There’s a business side here, and I think our friendship will take a back seat to what we want to accomplish.”

Additionally, he saw no problem with his move to the desert. The chance to grow with a young core that the Coyotes boast was more than enticing.

“You can see that they are building something here and I wanted to be a part of that,” Kessel said. “I think my time in Pittsburgh was coming to an end and I felt that. I think this is a great situation for me and I want to help this team in any way I can. I think I fit well and I can help this team get to the next level…I think I can help the young guys grow as players.”

The arrival of Kessel presents the Coyotes with a multitude of options to line him up on one of the team’s top lines. The right-handed winger is known for his ability to shoot the puck, and a line with forward Clayton Keller or Nick Schmaltz could be dangerous for opposing goaltenders.

Aside from his goal-scoring ability, Kessel has another important quality to his game that hindered the Coyotes all of last season: his health.

On a team that was riddled with injuries, Kessel comes to Arizona playing in 82 games for each of the last six seasons.

Whether or not Kessel pans out in an Arizona sweater is yet to be determined. Chayka gave up a solid young piece in Alex Galchenyuk for the seasoned winger who can light the lamp. However, one thing is certain about the former Penguin who is now in the Valley of the Sun: His resume speaks for itself, and he’s dedicated to making sure that everything works out how it should in Arizona.

“You want to prove something to people, and you want to be better than you have been in the past,” Kessel said. “I want to make this team into a playoff team…I have it in my gut to try and make that happen, and I am going to do whatever I can to make that happen.”

When Pittsburgh won back-to-back Stanley Cups in 2016 and 2017, Kessel was instrumental in helping his team lift Lord Stanley. He was a plus-5 and a plus-12 on both of those cup teams.

Now in Arizona, it’s a new chapter as he hopes to supplement a young pack of Coyotes that was just short of missing the playoffs last season. Kessel is a big piece to the puzzle, and if he plays to his potential as he has for the last decade, then Chayka and the organization can see big dividends.

“He’s played in the big games and he’s played on the big stage,” Chayka said. “That was a big part of us acquiring him was knowing that in those big moments, he’s had a lot of success. We are trying to embrace those expectations.”