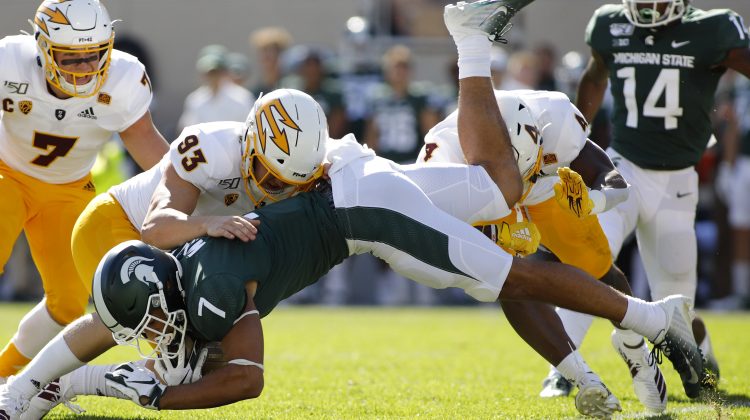 Coaches within the Arizona State football program have used the term “poised” over and over with me when talking about the early returns on freshman quarterback Jayden Daniels. We saw the “guts and guile” of Daniels in Saturdays 10-7 road victory at #18 Michigan State.  Herm Edwards summed up Daniels afternoon, “he made a lot of plays with his legs”. Daniels ran for 37 yards on the day, including a huge 16 yard scramble late in the game on 4th down(a play that reminded me of Jake Plummer back in the day).

It was a good old-fashioned street fight between the Big 10 and Pac-12 for a national television audience to take in. While I’m not going to sit here and say that the game was a thing of beauty(it wasn’t). It was a victory none-the-less. ” We’re still growing”, head coach Herm Edwards said after the game to the FOX TV national audience. “We aren’t going to win many games 10-7”.

None of that mattered to the Sun Devils, who were able to celebrate after a third missed field goal by Michigan State kicker Matt Coghlin. Even that final play of the game was controversial. The Sun Devils should’ve been flagged for a leaping penalty, but the officials missed the call.

Arizona State opens Pac-12 play next Saturday at home against Colorado. The Buffaloes lost their first game of the season on Saturday to Air Force.