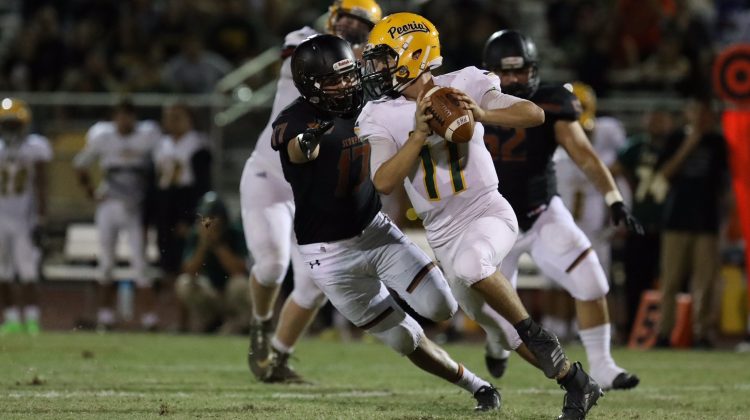 We’re reaching the halfway point and teams are getting down to business. In this week’s notebook, we also visit a rivalry that’s once again on the rise.

A rematch of a 2018 thriller might also be a semi-final-like match for a Region Championship. Desert Edge and Peoria went down to the wire last year with both Kyle Samford and Adryan Lara throwing touchdown passes in the final minute of the game where DEHS would take a 27-22 victory.

Following a two-game losing streak to top tier team, Salpointe Catholic, and 5A’s Millennium, Desert Edge is back on track with a 30-point victory against Poston Butte. Their 3-2 record is nothing compared to the experience this young and talented defense has gained through the first half of the season. Peoria currently sits undefeated at 4-0. While defeating opponents by an average of 45 points, this is surely the game to prove that Peoria is for real again this season.

For the Panthers, they want redemption at home. A victory last year could have ended up becoming a West Valley Region Championship last year after running the table following their loss to Desert Edge. While senior quarterback Kyle Samford is more than capable of slinging the ball downfield, the Panthers have spent most their time on the turf, rushing for 300 yards per game as a team behind one of the toughest sophomores in the 4A Conference, Cameron Mack. The youngster shared the field last year with potent senior running backs, Malachi Potee as well as New Mexico State’s Juwaun Price for all but one game. Against the Scorpions last year, both did not play, leaving the then-freshman to rush for 50 yards and a touchdown.

@MikeGrose @RsmithYWV @KevinMcCabeFSAZ, @PeoriaPantherFB defeats Thunderbird 54-12, behind 2 INT’s from their defense. Improves to 4-0, HUGE region game vs Desert Edge next week. The only team to defeat the Panthers during reg. season last year pic.twitter.com/LWkqd1Q9s9

Now with the sophomore rushing for over 150 yards on average, the youthful Desert Edge defense looks back to last year’s meeting to try to shut down the Panthers’ leading yard runner. DEHS has already faced arguably the best running back in the state with Bijan Robinson at Salpointe Catholic. That learning experience could be vital in getting back-to-back wins against Peoria. While sophomore quarterback, Lara, has passed over 350 yards on average this year, fellow sophomore, Cris Contreras, has been locking down on defense. The s’more leads Desert Edge in sacks and tackles for loss in 2019.

There’s a likelihood that the winner of this game controls their destiny in clinching a spot in the 4A Tournament with a West Valley Region Title. Regardless of that, both teams could also be vying for a number one seed in the 4A Tournament if both Salpointe Catholic and Saguaro, in fact, are moved into the Open Division Playoff.

A west side rivalry takes the stage on Friday night in another edition of the Deer Valley Skyhawks taking on the Barry Goldwater Bulldogs.

Deer Valley knocked off an 11-game losing streak in week two shutting out Thunderbird. Now they head into a rivalry match where they lead the Bulldogs over the past eight meetings with a 6-2 record. The 1-3 Skyhawks have had tough games against Greenway, Prescott and Arcadia. The offense has been growing with senior, Charles Hill leading the charge. Hill has produced all over the field claiming over 100 yards in rushing, receiving, and returning kickoffs while gaining 45 yards on an interception

If the trends of Barry Goldwater continue, history doesn’t look great for the Bulldogs. Since 2004, BGHS has only won once in every three or four meetings and are coming off a rivalry win last year. In Frank Lautt’s first season at the helm of the Bulldogs, the team is at an even 2-2 with wins against Raymond S. Kellis and Central. While Goldwater is on a two-game skid, the team has been a bulldozer on offense led by Earnest Greenwood. The junior has nearly 600 rush yards, running more than 100 yards in three of their four games. Be careful keeping your eye solely on him though, because you might miss fellow 500+ yard rusher, Jaidren Williams, as he streaks downfield.

Both teams hope to continue growing this season and this midseason rivalry game is a great time to check out your productivity against your rival.

After hanging their hats on spoiling Desert Edge’s homecoming two games ago, the Tigers of Millennium were quickly brought back down to Earth in a loss to Higley last week. Now it’s time to face the ultimate 5A task in battling against the defending champions, the Centennial Coyotes.

The ‘Yotes somehow are always full of experience year in and year out, and that’s in part due to the young talent that emerges. An example on offense in 2019 is sophomore running back John Scott, leading the entire team in rushing yards, nearly averaging nine yards per carry. Defensively, DJ Gleash has pressured opposing quarterbacks every game with seven sacks already in only four games.

The Tigers have had a balanced offense averaging nearly 150 yards per game from the air and the ground each. Senior, Larry Craft has been the team’s swiss army knife racking up rushing, receiving, kickoff return, and punt return yards to lead Millennium in all-purpose yards. A spotlight of this team has been senior, Treydan Stukes, who’s four interceptions has turned into 109 interception yards.

Both teams stand at 3-1 but have different outlooks on the season. Centennial is playing to get better every week in hopes of playing in the Open Division Playoff while the Tigers look to get better as a potential contender in the 5A State Tournament.

There is plenty of football in action, so be sure to go support your team and don’t forget to use #FridayNight360AZ to join in on all the talk under the lights!