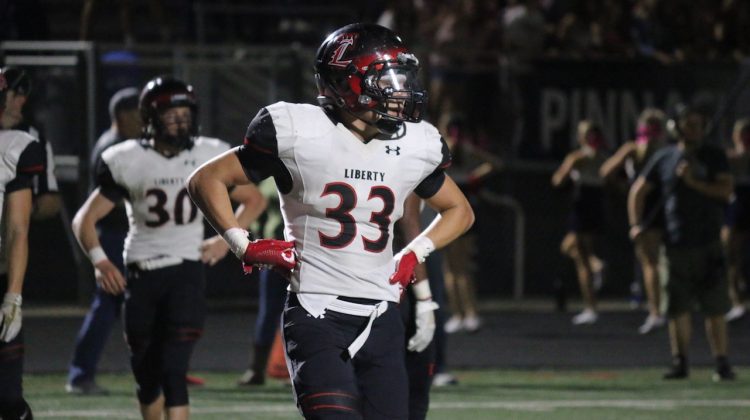 After some big-name talent invaded the west valley last week, Friday the 13th brings plenty of big games west of the I-17 this Friday night.

In the final minutes of last year’s meeting, Jace Accurso recovered a bad snap to score the game-winning touchdown out of the wildcat formation to bring Liberty to 4-0 on the season. After only seeing offensive snaps out of the wildcat last year, Accurso now rules the offense as the Lions’ main running back.

Jace Accurso turns in the play of the game for Liberty giving the Lions a 21-14 lead 4:51 left pic.twitter.com/y6XUHXyxtY

In the Lions’ rivalry game against Sunrise Mountain last week, the senior running back averaged ten yards a carry for 114 yards, a career-high. Advancing to 2-1 on the season, the rest of the offense was running on all cylinders as well against the rival Mustangs. The Lions’ 41 points were spread around, scored by over half a dozen players on the team.

Once again, they face a stout defense and a Desert Ridge team hungry for their third straight win after falling in their season opener. The Jaguars have scored 92 points in their last two games, but against struggling defenses. The Lions defense has seemingly gotten better since their season-opening 9-6 loss to Brophy Prep. Senior, Isaiah Pittman, emerged as another star defender for Liberty racking up a sack, four tackles for loss, and five total tackles against SMHS.

The first thing the Lions must stop is DRHS’s junior quarterback, Austin Kolb, a gunslinger with over 600 passing yards and eight TDs on the 2019 season. Three different Jaguars have double-digit receptions and multiple touchdowns so far. those three players account for nearly all the team’s receiving yards. Pittman, alongside Jax Stam, Shane Pitts, and the rest of the defensive crew in coverage need to shut those three down and have a field day.

The Jaguar defense has picked off opposing quarterbacks four times in 2019 and has six players with over a dozen tackles so far. While the Lions have home-field advantage in this matchup, the game could come down to the wire once again, especially if both defenses find their rhythm.

It’s a Dysart Unified School District bout between the Wildcats of Willow Canyon and the Stallions of Shadow Ridge. Coming off a bye week, Willow Canyon is in game two of their back-to-back-to-back faceoff against every sister school in the Dysart District.

In two games this year, the Wildcats have outscored opponents 74-7, including a 42-0 shutout of sister school, Dysart. Multi-talented senior, Darvon Hubbard, has scored eight of the ten total touchdowns by WCHS this season. Primarily on the ground, Hubbard has claimed 400 more all-purpose yards than any other player on the team beside the quarterback.

Shadow Ridge has also been on the ground attack behind senior, Michael Clark. The team sits at 2-1 with their only loss to defensive juggernaut, Brophy Prep. Hayden Ortiz has impressed on the SRHS defense, racking up 11 tackles, three tackles for loss, and two sacks so far in 2019.

This could very well be a foot race as long as Shadow Ridge can keep up the pace. It will be interesting if this battle turns into an old-school grudge match that is won in the trenches trying to get the offenses pounding on the ground.

Young Guns in the House

Last year’s Greenway Demon team made a quarterfinal run, went 10-2, claimed the Skyline Region Championship and graduated 6,000-yard career passer, Tyler Duncan. After such large shoes to fill, the Demons have scored 84 points in just two games. The lone blemish on last year’s regular-season schedule was from a trip up to Prescott Valley to battle the Bradshaw Mountain Bears. This year, the Bears come to them.

The term, ‘youthful,’ might be an understatement when referring to the 2019 Demons. At the helm of the offense is sophomore, Aodhan Murphy, who has thrown for 184 yards in his first two varsity games. His favorite target has been junior, Daymond Neal, who has caught both of Murphy’s TD passes so far. The leader of the offense so far has been fellow junior, Christian Johnson, who rushed for 289 yards and four touchdowns against Estrella Foothills in their season opener.

After a 51- 12 win over 5A school, Sierra Linda, the young Demon offense will face the toughest team they’ve seen all season as the Bears invade. Even though BMHS is on a two-game winning streak, the Bears fell to the same Estrella Foothills in their home opener that the Demons overpowered by 20 points.

The Demon offense is receiving a little help from an experienced defensive core. Seniors, Colton Johnson and Jace Creed have both accumulated four sacks each while fellow senior, Heston Wahner, picked off two INTs. While there are still tests to come in 2019 for the young Demon core, a battle against the Bears will be a good learning experience moving forward.

Getting on a Roll

The Verrado Vipers couldn’t score a touchdown until the final quarter in their bout against the Casteel Colts, leading them to a 30-15 loss. The 1-1 Vipers now host a 5A Tournament semifinalist from 2018 who is just coming off their first win of the season, Williams Field.

The lone TD was scored by the Viper’s leading yard-getter, junior, Logan Gingg. With 424 total yards in two games for the Vipers, Gingg has been the fire of the Verrado offense scoring five of the seven touchdowns on the season.

After a rough loss to Sunrise Mountain in a comeback fell short, the Black Hawks offense finally found their grove scoring all 42 points against Cactus Shadows in the second and third quarters. Even with a 1-2 start, WFHS has averaged nearly 35 points per game while Verrado has allowed 28 points or more in both games in 2019.

The Vipers are in a tough stretch of their schedule. Last year, their loss against Casteel led to a six-game losing streak including a 31-0 shutout loss to the Black Hawks. With an undefeated Campo Verde team on the horizon, a good game against Williams Field could be enough to lead this team on a positive stretch to battle for a 5A Tournament spot.

Be sure to support your team and share where you’re by using #FridayNight360AZ.

All new #AZAudibles is here. Seeing these makes me so happy. Can’t wait to be back with the crew. Till then, stay safe everyone and watch here 👇🏻👇🏻 https://t.co/cINhU0yIUC
View on Twitter