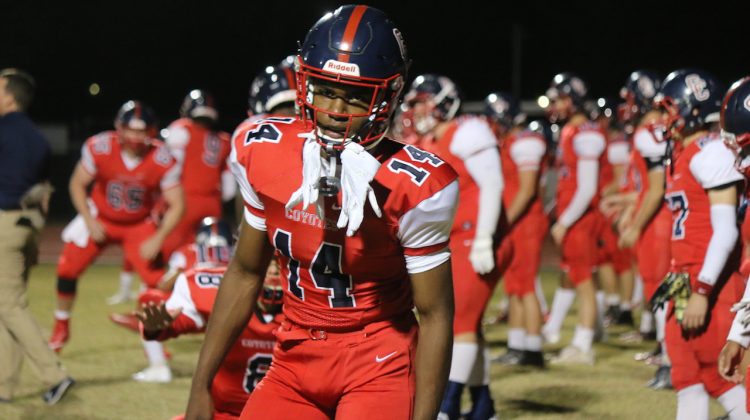 Some of the biggest games of the year are happening this Friday night in week two! Not only is the number one school in the nation coming to town, but one of the highest-scoring rivalries in the state will battle again. Just south of that, one of the best teams in the 4A Conference face one of their biggest challenges of the year. There’s a lot going on this week, so let’s jump in!

An opportunity that very few teams ever receive is a chance to battle the best team in the nation. Fans of the west valley will have the opportunity to watch the best team in the nation this Friday night as the top-ranked, Mater Dei Monarchs, arrive in Peoria, Arizona to battle the defending 5A Conference champion, Centennial Coyotes. Over the past two seasons, Centennial has battled against three top tier teams in the nation on their home Peoria turf. Two seasons ago, it was Florida’s St. Thomas Aquinas who the ‘Yotes defeated in the regular season, following that up with a near-shut out of Nevada’s parental powerhouse, Bishop Gorman in 2018.

According to Centennial head coach, Richard Taylor, it was a call from Santa Ana to Peoria that got the ball rolling about a game. “They called us and asked if we were interested in a game two years ago and it didn’t work out,” Taylor said. “I didn’t know if he would ever call back or not, but he did. They may have been looking for an easy game in between two hard games, but whatever the reason, we’re proud the number one team in the country is coming to Centennial High School.”

Very few teams get the opportunity to test themselves against the best team in the nation. @Cehsfootball gets that chance on Friday.

Get ready for the game & see how it came together. If you don’t have plans, make plans to see @CeHSAZ battle @MDFootball.https://t.co/2FdmR4bBHn

Expect MDHS to score regardless of how powered up the Centennial defense is. Quarterback, Bryce Young is following in the footsteps of past Monarchs, Matt Leinart, Matt Barkley, JT Daniels, and most recently Bru McCoy, going from a Monarch to a USC Trojan. Young has thrown over 9,000 yards in his Mater Dei career featuring 101 touchdowns and just 16 INTs. Naturally, protecting one of the best QB’s in the nation is one of the best offensive linemen in the nation, Myles Murao, verbally committed to Washington.

Centennial Quarterback, Jonathan Morris is tasked with keeping the offense moving down the field not only against a tough defense but in a way that matches the Monarch’s offensive productivity. Arizona commit, Dyelan Miller, will be a key receiver for Morris and Jaydin Young returns as the leader in All-Purpose yards from last year. The ‘Yotes major struggle against Eastside Catholic (WA) in last year’s Gieco Bowl was the inability to get downfield. Centennial was shutout for the first time since 1997 in that game. Against Mater Dei, if they aren’t in the endzone multiple times, there’s nearly no chance of victory.

Business trip to Arizona 🤝 The #monarchs are officially headed to the desert to take on Centennial. pic.twitter.com/dlF5GLMkHo

While a match-up between the number one and number 96 ranked schools seems pretty lopsided, don’t jump to conclusions. USA Today dubbed the Coyotes as “the giant slayer from Arizona,” citing their two other wins against teams who were ranked in the top 20 nationally at the time of their loss to the Coyotes. This will be the toughest opponent an Arizona school has ever witnessed, and now Arizona fans have the opportunity to see the team for themselves.

To see more on the matchup check out the latest edition of AZ Audibles from Centennial High School, and read ‘Opportunity of a Lifetime.’

If the number one team in the nation wasn’t in town, the game of the week would be another rivalry matchup between Liberty and Sunrise Mountain. The two tangoed to a 49-43 final score in last year’s matchup with the Lions of Liberty taking the victory.

Mustang fans are used to dynamic quarterbacks in the backfield after Boise State’s Chase Cord and Air Force’s Keegan Freid led the team to 40 combined wins over the past four seasons. Now the QB-10 jersey rests on the shoulders of senior, Alexander Gianoli, and he looked a lot like Freid and Cord in terms of productivity.

The senior helped lead his team to a three-point victory last week against Williams Field, a team the Mustangs lost to twice in 2018. Gianoli only recorded seven varsity passes coming into 2019 but has shown off with the SMHS offense scoring 95 points in two games.

Liberty’s offense is still finding its identity after the loss of many senior weapons. While the o-line has stayed fairly intact, even the quarterback spot has a new look with senior, Jonah Guevara, and junior, Brock Mast, exchanging the role nearly every series. After a tight 9-6 loss to Brophy Prep, the Lions had the opportunity to get the wheels turning on offense with a 48-0 route of Copper Canyon.

PICK UP YOUR SUNRISE SMACKDOWN SHIRTS STARTING TOMORROW AT BOTH LUNCHES FOR $12!! https://t.co/QreG7z4LSQ

While Jace Accurso takes charge on both sides of the line, the defense seems a little more youthful. Sophomore, Jax Stam, came off an impressive freshman season and is expected to be a leader on defense, proving that with a solid performance against Brophy Prep. Last week, fellow sophomore Damien Dupoux, found his way in the backfield often against Copper Canyon with seven tackles and a sack. If the Liberty defense has sophomore leaders in its core, that defense will likely look better every game.

Both teams look to be in stride with the season rolling on, and this revived rivalry will once again be a marquee matchup on both team’s schedule even though they sit in different conferences. Every yard matters, especially when four points is the average margin of victory in the last three meetings. Will this be another high-powered offensive shootout? Yeah.

Welcoming the Best of Tucson

If the last two games don’t suit your fancy, you’re in luck with another marquee matchup on the west side.

Many believe Salpointe Catholic has a chance to take the city of Tucson to the Open Division Playoff out of the 4A Conference. After their game against Del Valle (TX) was announced as canceled, it appears if any team can stand in their way in 2019, it’s Desert Edge.

Last year’s battle was only a seven-point game. Friday night is the Scorpions home opener and they hope to open with a statement. Coming off a 50-0 win against Moon Valley, DEHS stands at 2-0. While a lot of their offensive production graduated last year, seven different Scorpions have found the endzone so far in 2019 with only two of them being seniors.

The Scorpions were without young sensation Adryan Lara and came within a touchdown of knocking off the eventual 4A State Runner ups in last year’s meeting. In his two games so far in 2019, Lara has completed 36 passes for 709 yards and seven TDs.

The focal point of any team that battles Salpointe has to be the defense. Containing Texas commit, Bijan Robinson, is a tall task for any team. Five different Scorpions have double-digit tackles through two games, all sophomores and juniors. Myles Hobbs currently leads the team in tackles with Isabien Ramos close behind.

This young defensive core will learn a lot on Friday against SCHS, but most importantly, they want to prove they stop the Salpointe offense and possibly end the Lancers chance at making the Open Eight Playoff.