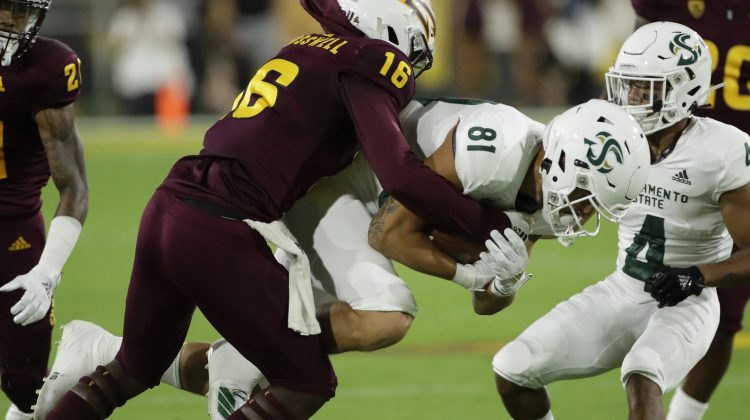 Arizona State, a 36 point favorite during the week, escaped with a Friday night win over Sacramento State 19-7.  Were the Sun Devils looking ahead to next weeks national showdown with Michigan State? Perhaps playing in a stadium that had mostly empty seats played into the lethargic effort.  The halftime score was 3-0 ASU.

The Sun Devils were hanging on, up just 12-7 at the five-minute mark in the fourth quarter when Eno Benjamin took a Jayden Daniels pass 72 yards to the end zone to give ASU the breathing room necessary for the victory.

Daniels would finish his second game with a stat line of  17-27-304 yards and the one touchdown.

ASU would have 78 yards of offense in the first half, 317 in the second.

The Hornets held the Sun Devils to just 19 points which becomes a Sacramento State  record against a FBS school.

Herm Edwards is now 5-0 in non-conference games. Next week the Sun Devils play at Michigan State.