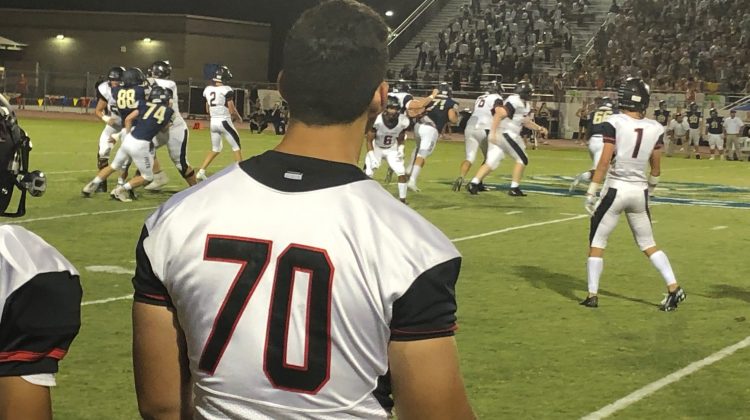 Noah Nelson watched from the sidelines at Casteel high school on Friday night. He should’ve been out on the football field with his teammates.

The Williams Field offensive tackle is one of the premiere high school talents in Arizona. He has already given Oklahoma University a verbal commitment. Friday morning he was informed that he was ineligible for the rest of the 2019 football season for violating bylaw 14.4.1  . I haven’t gotten this upset over an injustice in a long, long time. Just when I think I’ve heard it all (Mountain Pointe assistant coach handing off plays to the opposition) along comes this. I caught up with Nelson’s head coach Steve Campbell, while the Black Hawks were warming before their game with Casteel, “To watch him(Noah) bawl his eyes out in disbelief today, was heartbreaking.”

Nelson was recently at a off-campus training session that included a freshman defensive lineman from Hamilton(who’s also been ruled ineligible). The two went through a brief one on one drill that was recorded on tape and posted on social media. Yep, that’s what cost Noah Nelson Friday nights game against Casteel. You can’t make this stuff up. He’ll never get that game, or perhaps others back. Tonight he’s ineligible for the rest of the season.

I spoke with Noah’s parents through the chain link fence on the visiting sideline at Casteel before kickoff. Both of them were heartbroken. Imagine being a mother and getting a call from the head football coach at 8am on Friday morning saying that your son is ineligible for simply working out with another player. If the one on one drill had not been filmed. If the two hadn’t been at the workout facility with a trainer,  if the two simply met down at a park without anyone else around there’s no violation.

I’ve been on this rant since early August about how poorly written 14.4.1 is, in this current climate of high school athletes. The bylaw has been put up for change 5 times in the last six years and has been soundly defeated each time. From my understanding there are those that don’t care much for the idea of private coaching, training and the things that go into making athletes in all sports reach higher levels. There are 274 schools in Arizona, and based on 14.4.1 still being in existence my only conclusion can be that a majority of schools feel as though private coaching and training is an unfair advantage for those who don’t have the means to pay to make their players better.

The key word on 14.4.1 is “interpretation”, How do you interpret a piece of video tape. Is it a true violation? David Hines is a good man, a fair man,  and yet the Executive Director of the AIA is in a no-win situation on this one. He didn’t write the bylaw, he didn’t tell the 274 schools in Arizona that this is the way things have to go. He simply had this 14.4.1 violation brought to his desk and had to follow through on the bylaw in place. Those above David and those around the State who don’t see the lunacy of keeping this poorly written piece of legislation in place, simply don’t have a clue of what goes on in high school training in this day and age.

What should happen on Monday morning is an emergency session of the board, Nelson should be ruled eligible, and then finding the right touch of getting 14.4.1 interpetation changed or just eliminating the entire bylaw. C’mon guys, we are better than this…