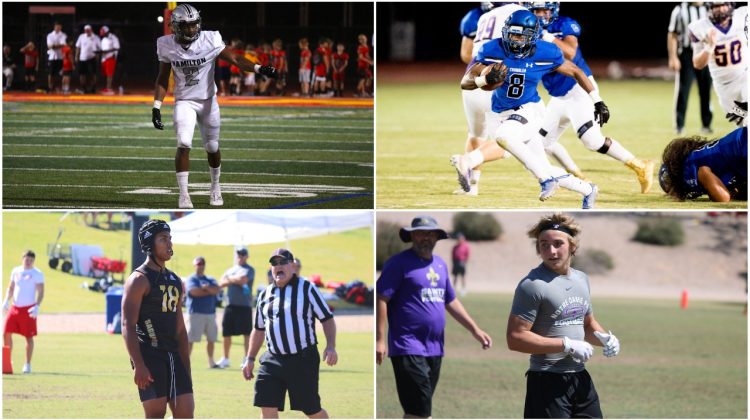 Welcome to The Official Visits, a weekly recruiting notebook I plan to post each Friday night giving you insight from some of Arizona’s top high school football prospects and commits. Each edition will have multiple interviews with players around the state covering where they are in their recruitment and the interesting aspects that make their experiences unique.

We have seen how track has already transformed Brenden Rice’s recruitment. Hours after he running a 10.75 100-meter dash at state for track this past May, he saw offers come in from Michigan, Michigan State, USC and Ole Miss.

Friday night, we saw how track transformed Rice’s play on the field as well. He took a short pass from Nick Arvay down to the 2-yard line, a 60 yard gain, on his first catch. In the 4th quarter, he took nearly the same pass 40+ yards to the end zone. He also covered a ton of ground and nearly pinned a Hamilton punt at the 1-yard line against Chaparral.

Rice chatted with me after Hamilton’s 44-21 victory over the Firebirds on Friday, and we covered using the speed he harnessed this offseason and future visits he has lined up. He said a decision on his college choice could come in late September.

The 2020 outside linebacker had a very good junior season with 45 total tackles, 13.5 tackles for loss and 3.5 sacks. Those numbers are more impressive when it’s revealed he provided those stats while breathing through one nostril.

He had a nose injury that has been corrected with surgery this offseason.

“Just being able to breathe, my cardio has gotten a lot better. Just working on my speed, my get-off and getting my muscle back up,” Sellers said.

“You’re just trying to get that air in in between plays and you’re warn out. You have to take your mouthpiece out and gather yourself and recognize the play calls and perform. It makes it a lot harder.”

Now fully healthy, Sellers is focused on the Open Division season and scheduling visits. Sellers said LSU, Texas, Oklahoma, possibly UCLA and Oregon are likely going to get his five official visits. He recently visited the Bruins on an unofficial visit. Most of these visits will happen in September, but Sellers does not have a timeline for a commitment.

ASU made waves this offseason when they offered multiple 2022 in-state recruits while on a mass visit. One of those was Notre Dame Prep athlete Gavin Smith, who got into some key varsity games as a defensive back. Now, he’s expected to have more of an expanded role with the Saints in his sophomore season.

Smith, whose older brother Jake was one of the best players in the state last class, describes the ASU experience and how he hopes to improve his game the next few years.

Jaheim Brown-Taylor was one of the many home run hitters in the Chandler offseason last year. As a backup, he rushed for 755 yards and eight touchdowns. He’s added offers from Tennessee Tech, San Diego State, NAU, New Mexico State, Wyoming, UNLV and San Jose State. He said he also has received interest from Minnesota, Michigan State and Iowa and Wisconsin for track.

For now, his goal is focused on the season.

“Hopefully to get to that 2,000 yards. That’s what I have written on my refridgerator, that 2,000, just like those other (Chandler running backs),” Brown-Taylor said. “They were great running backs, and I just want to match their goals too.”

He hopes to make a commitment by December.

If you’re at a game on Friday nights, don’t forget to use #FridayNight360AZ on your social media posts, and we’ll be sure to share it.