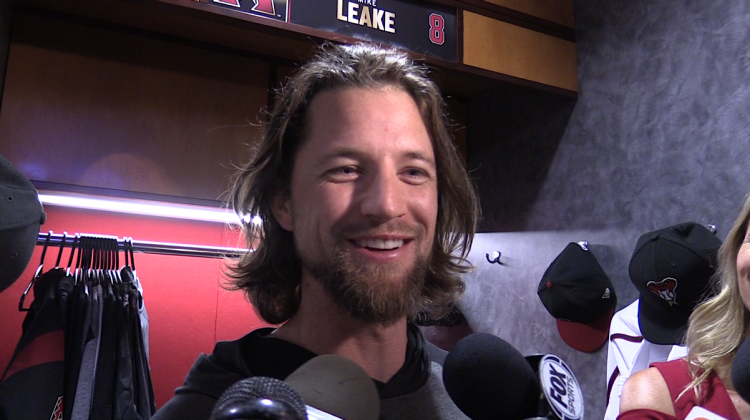 It’s been no secret that Mike Leake has wanted to come home.

When the right-handed pitcher was a free agent in 2015, he tried to get back Arizona, but it didn’t work out and he signed with the San Francisco Giants. But he has always been ready to jump at the chance to play in the place where he went to college.

“I just think the desert has a spirit to it,” Leake said. “I enjoy living here and I enjoy being here. It’s home for me and hopefully I can make some special memories.”

Leake had been linked to the Diamondbacks earlier this season when the Snakes were in need of pitching depth, but the deal never materialized. As the deadline approached, the veteran was a name that had been rumored to be moved since he’s thrown 137 innings while posting a 4.27 ERA and striking out 100 this season.

He admitted he had kept a close eye on the dealings of deadline day, but thought something “drastic” needed to happen to get him to Arizona.

“We’ve always wanted to address that (depth) situation but then there was an additional urgency when we traded Zack and the trade deadline pushed that,” Diamondbacks general manager Mike Hazen said.

Hazen reached out to Mariners general manager Jerry Dipoto and the two worked out a quick deal with minutes to spare before the deadline.

Now, the former Sun Devil is back in Arizona.

Leake was one of the best pitchers in Arizona State history. He was an All-American and named the National Player of the Year by the American Baseball Coaches Association before getting drafted eighth overall in 2009 by the Cincinnati Reds.

A decade later, he cherishes the team accomplishments over the personal accolades.

“The College Worlds Series two out of three years and being able to go out in the World Series and playing with the guys I played with are the memories,” Leake said. “Still seeing (Cleveland Indians second baseman Jason Kipnis) and (Tampa Bay Rays infielder Eric Sogard) playing, those are the ultimate memories.”

Hazen believes Leake can provide a veteran mentality to the rotation while helping shoulder the load left by Greinke.

“The consistency, pitchability, strike-throwing, durability, all those things that quite frankly we’ve been talking about these last few months that we’ve missed in some cases that in the rotation since we’ve lost (Luke Weaver). We’ve kind of chased that.”

Like Greinke, Leake has had to adjust to a new hitting approach within the league. The veteran’s arm has slowed down, but he’s found new ways to remain effective, something the Diamondbacks research team can potentially enhance even more.

“My velocity is down a little bit, so I’ve had to learn how to pitch a little bit more this year,” Leake said. “I think the ability to pay attention to the hitters and adjust with what they’re doing in the game and how they’re adjusting analytically with the launch angle stuff is making me work a little harder. It’s fun, it’s part of the game and something I enjoy.”

And it will be a homecoming for Leake through at least the 2020 season. He feels the moves the club made on deadline day made a statement to the fanbase on where the roster currently stands and will stand in the future.

While he’s adjusting and enjoying his return to the desert, Leake knows it’s a matter of days until he needs to show why Hazen targetted him at the trade deadline.

“Playing for your hometown team is a dream for me, so it’s nice to be here and have that opportunity. Right now, I’m a little bit on Cloud 9,” Leake said.

“But in a few days, I’m going to have to take care of business.”