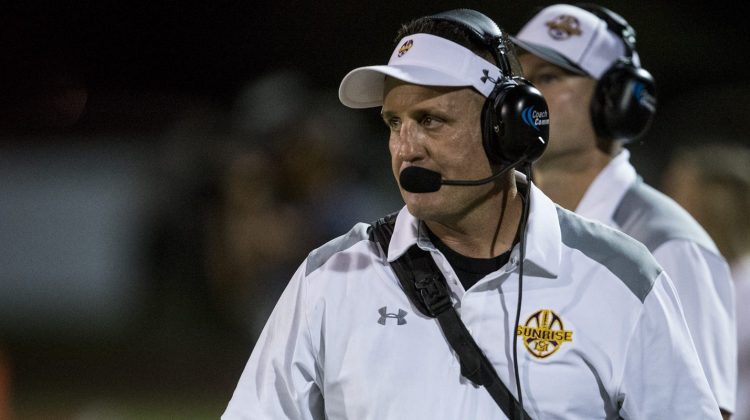 We had some wild games in Week 0, but now it’s time for the whole state to get the football season rolling. There are plenty of rivalry games and big-time competitors visiting the west valley, so let’s jump right in!

The Sunrise Mountain Mustangs fell just short of reaching the 4A state championship game in 2017 and put on a show last year in their first season in the 5A Conference. SMHS ended their first 5A season at 7-3 while earning a seventh-place seeding for the postseason. The team was successful in becoming a threat in the conference, but one team kept standing in their way.

The only blemishes on the Mustangs’ schedule were against eventual champion Centennial, a tight game against rival Liberty, and a five-point loss to Williams Field in Week One. When Sunrise Mountain matched up against the WFHS Hawks again for a spot in the tournament semifinal, they were neck and neck once again but fell short by a touchdown.

Williams Field totaled nearly 500 yards of offense in their tournament game, nearly a 200-yard improvement from their first meeting. Now, both teams send different quarterbacks into the fire after the graduation of Division I bound quarterbacks, Keegan Freid and Zack Shepherd. Senior, Alexander Gianoli led SMHS to a 57-0 victory in their season opener against Central. Heading into his senior year, MaxPreps states Gianoli has only attempted seven varsity passes in his career, a very different story than the Mustangs’ last two QB’s who both went on to DI schools.

In last years’ games, yardage wasn’t necessarily a defining factor in winning or losing. More so, it was Sunrise Mountain’s inability to punch the ball through the endzone. Returners such as Bryce Cord and Nathan Duran could be the difference in points on the board. Regardless, taking advantage of having the ball in Hawk territory will be critical to Sunrise Mountain starting the season 2-0.

The Mustangs follow up this home opener with a rivalry game against 6A Liberty, also on SMHS’s home turf. Getting through these first two home games healthy and competitive will help Sunrise Mountain cruise through the middle of their schedule into Northwest Region play.

Battle for the Rock

The River Rock Showdown is ready to rock and roll this Friday night as the 5A Agua Fria Owls host the 6A Tolleson Union Wolverines for their season openers. Tolleson handled last years’ battle handily with a 43-14 victory behind five different players rushing into the endzone.

Agua Fria HS and Tolleson HS have a 60+ year history. Playing for “The Rock” started in 1996. #BringHomeTheRock @AFHS_FBBoosters @AFHSStuCo pic.twitter.com/OlW87twdNh

Two Owl players scored a touchdown in last year’s meeting and both of those players are returning. While it will be tough for seniors Nicolas Murguia and Tre Lewis to keep up with an up-tempo Wolverine offense, they’ll need help from the defense to build a brick wall. The Owls caused three turnovers along with three fumbles but only recovered one. Angel Martinez was a big help to the defense last year with a team-leading seven tackles and one caused fumble.

Meanwhile, the Wolverines are looking to grow and jump into the 6A Tournament. Last season’s 6-4 record wasn’t enough to grab a tourney spot, and once again faces tough opponents like Hamilton and Brophy Prep directly after the River Rock Showdown. While the Wolverines lost many seniors heading into 2019, the name that stays the same is Arnell Christen. The senior racked up 170 total yards in last season’s battle and ran through the endzone twice.

Had a awesome time at camp, something special is happening here at Tolleson with my brothers. Guts out for the season. 😈💪🏼@JamesMcelhenny3 @savagenelly25 @22xvel @linemanissues pic.twitter.com/jAtKZLLFgN

The two battle again for the flat rock that has exchanged hands to the winning team since 1996. Tolleson has claimed the rock for the past six years. This rivalry is a great game to open both team’s seasons but will also be vital in starting off a difficult schedule with a win.

There is another rivalry game happening on the west side as the 5A Willow Canyon Wildcats battle the 4A Dysart Demons. The rivalry is once again an important aspect of finding momentum before diving into the bulk of their schedules.

this weeks home game theme will correspond to our military appreciation night, be decked out in your red, white, blue, and camo spirit wear!! 🇺🇸🌟🐾 *entrance is free if a military id is shown* pic.twitter.com/TA8AtCaKbw

Last season, Willow Canyon lined up every Dysart school, regardless of conference, onto their schedule. The result was a test of their strength, defeating Dysart, but falling to 6A schools Shadow Ridge and Valley Vista. The Wildcats line up all three again in the same order hoping for improvement against those 6A teams. First, they must defeat Dysart.

The Demons fell in their opener to Washington in Week 0 and look ahead to a continuously difficult schedule. A strong game against a 5A team like Willow Canyon can give the team a head of steam heading up to Flagstaff in the following week.

Both teams lost a massive amount of productive seniors but have some leaders from last season ready to step up in 2019.

It’s always fun to start your season on a high note. A 60-10 victory at home is a great way to sing that high note. Now, the Sandra Day O’Connor Eagles face a huge threat at home to get the competitive juices flowing.

The Basha Bears started last season on a four-game win streak, including a tight 17-13 win at home against SDO. Momentum fell apart though once the Bears ran into difficult Premier Region play and ended the season 6-4 and eleventh in the 6A Tournament. Another victory against the Eagles could help claim a first-round home game in the 2019 State Tournament.

Last year’s 4-6 record is only part of Sandra Day’s story. The Eagles were only a touchdown from beating Liberty, Perry, and Chaparral, wins that would have potentially bumped them into the state tournament. Instead, the team finished two spots out of a tourney spot and graduated quarterback Ethan Moller to Western New Mexico.

Senior quarterback, Dylan Simonton, took over the helm of the offense last Friday night to throw for nearly 350 yards and five TDs. The offense will need to keep up the pace against Basha who ran and threw for 189 yards each in their season opener to keep the game in reach. Also, a win would be quite the momentum booster as they head to Hawaii next week before battling Perry.

There is plenty of football back in action, so be sure to go support your teams. Also, don’t forget to use #FridayNight360AZ to join in on all the talk under the lights!