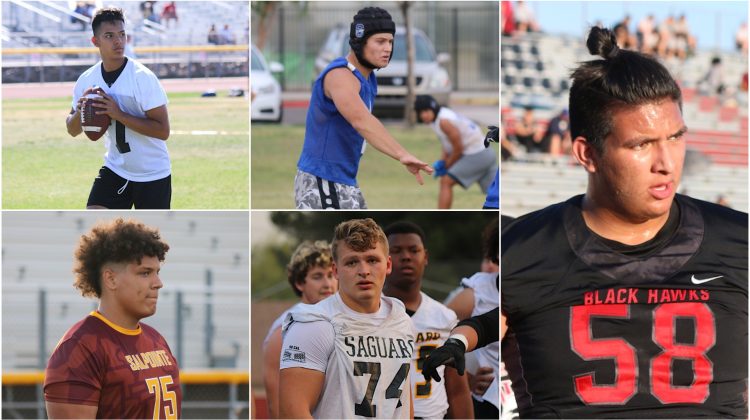 It’s been a busy offseason checking out some of the top players throughout the state. It’s been a crazy recruiting season with a lot of top 2020 players making their pledges before their senior season. I want to thank all the players who shot one-on-one interviews with us prior to their commitments. I know that takes a level of trust. I take that very seriously and appreciate it greatly.

On game day of Week 0, I wanted to highlight a few players I got to talk to this offseason who I’m sure we’ll hear more from this season on the recruiting front. Some are underclassmen who are already seeing big time offers come their way. Others are seniors who are seeing their recruitments pick up, which could continue as the season progresses. One is a player in the middle of one of the best defenses in the state and is getting ready to see some college campuses.

Regardless of where their at in their recruitment, we’ll hear more about them this season.

Tonight, I’ll also be provided a few recruiting updates from guys I talked to last week and this evening after the Chaparral-Hamilton matchup.

WOW, So happy to announce that I’ve received an offer from The University of Washington! I’d like to thank @scotthuffUW & @CoachPeteUW for this great opportunity! #PurpleReign 💧☔️ pic.twitter.com/Q9aEza5XRE

It’s been a busy spring for Miller. Among multiple visits, he was able to check out Texas in April with Robinson.

“It’s an amazing place,” Miller said though a smile. “I like (Texas offensive line coach Herb Hand) and (Texas head coach Tom Herman) a lot. He was really cool.”

Miller’s latest offer, Washington, surely will be in on the offensive tackle’s recruitment. Former Salpointe Lancer lineman and current Husky Mateo Mele is a player Miller tries to emulate his game after.

Chandler linebacker Tate Romney is a leader on one of the toughest defenses in the state and is coming off a great junior campaign that featured 92 tackles, 18 tackles for loss, six sacks, two interceptions and seven passes defended.

He plans to study engineering or finance after serving a two-year LDS mission.

Romney said his focus is on the 2019 season and bringing the Open Division title to Chandler, but he is in the process of potentially visiting Washington State, BYU, ASU and Oregon. He currently does not have a timeline to narrow a list or make a commitment.

The Desert Edge gunslinger made a name for himself as a freshman, throwing 20 touchdowns in his first year as a starter. Now, he’s looking to grow mentally and physically. The 6-foot-1, 175-pound signal-caller believes the Scorpion offense can post 40+ points per game.

On the recruiting front, he also added his first two Power 5 offers in Iowa State and Arizona. Expect more to come over the next few years of starting.

The Saguaro Sabercats are bringing plenty of experience back along the offensive line. One of those returners is Tye Kassen, who currently is an interior offensive lineman, brings plenty versatility to the line. He currently holds offers from ASU, Louisville, Washington State, Memphis, NAU and Utah State.

“I told (schools) honestly I could play anywhere,” Kassen said this offseason. “I played tackle as a sophomore and I can play center too. Honestly, anywhere I feel good.”

Kassen said he has also talked to a few Pac-12 and Big 12 programs this offseason.

For the 6-foot-8, 290-pound Garcia, he feels right at home with the Black Hawks.

“Big men don’t really get that much love (on the football field),” Garcia said. “When you come to Williams Field, it’s all about the big men running down the field, punching it down the throat.”

Currently, Garcia holds offers from Liberty and Northern Colorado, as well as NAU and New Mexico State, two programs that have recruited the Southeast Valley well. The Lumberjacks have former Williams Field players on the roster including Jackson Vaught and Justus Stokes.

Football season is upon us. If you’re at a grame, remember to use #FridayNight360AZ on your social media posts and we’ll be sure to share it.