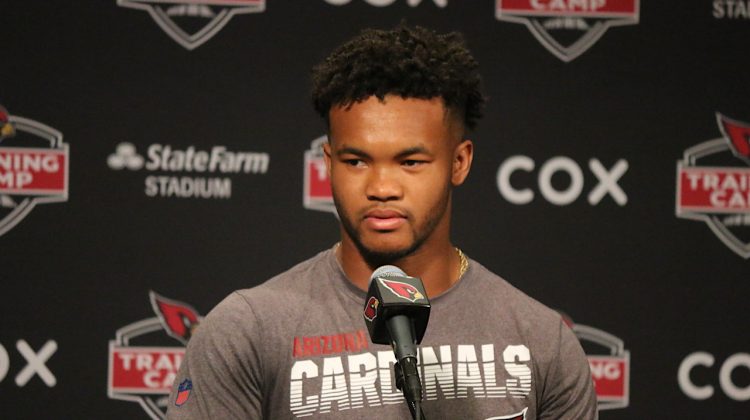 The Arizona Cardinals open up their training camp on Thursday with a walkthrough in the morning and practice scheduled for the afternoon.

Here’s what Kyler Murray, Kliff Kingsbury and Larry Fitzgerald had to say about the latest news with the Birdgang.

Kyler Murray on why Kliff Kingsbury’s Air Raid system can fit the NFL:

“I don’t know why everyone thinks it can’t be successful. Just like any other offense, it’s an offense. We work at it, we practice it, and it’s our job to execute it. If we don’t, it wont be successful, but if we do, like I said, it works at the college level. I don’t see why it can’t work at the pro level. It’s our job to make people believe that.”

Murray on how the run game will play into the offense:

That’s where it starts, at the line of scrimmage, physicality at the line. If we’re dominating at the line, then everything opens up. We have (David Johnson) back there. Once we get things going, that just opens up a lot of deals for the offense, whether it be pass game, run game. All of it works.

Murray on the prospect of a losing season, something that hasn’t happened in his high school and college career:

I haven’t really thought about losing so I don’t really know. I don’t plan on it.

Kliff Kingsbury on the Cardinals’ offensive scheme in the NFL:

I think you see more and more of the ‘college’ schemes and different schematics showing up in the NFL game, so hopefully how we’re blending things together, we’ll put together a quality product on offense.

Kingsbury on rookie cornerback Byron Murphy potentially starting or having an expanded role early in the season:

I think with the need, there’s not going to be much choice there. Byron’s a very confident young man. He played at a high level in a big-time conference under bright lights over and over in his career and showed up in those games. There will be growing pains, we know that, but we’ve like what we’ve seen. If he’s thrust in there, I know he’s going to be fired up for the opportunity.

Kingsbury on how he will utilize wide receivers throughout the game:

It will be unique for me because I’m used to playing eight in a game. Getting those numbers to where they’re at, it will take multiple guys knowing every position across the board, so I think that’s a big part of it. The more you can do at that position, the better off you’re going to be as far as making this team.

Larry Fitzgerald on how Kyler Murray has handled the pressure of the NFL:

It’s reassuring. When you look in his eyes, there’s nothing timid about him. He looks confident, he’s ready to go, that’s a great sign for a young quarterback in this league.

You look at the roster, 15-20% of the guys end up on IR. By the end of a 16-game season, it’s a battle of attrition at the end of the year. As fans, they want to see a good product, right? I think a 16-game season allows for enough of your marquee players to stay on the field and be able to have a show that people want to pay for and watch. Adding two more games, would it increase revenue? Absolutely. Would it increase visibility for international games possibly? For sure. But the game is played by players, and you need players on the field and you need them to be healthy.

The Cardinals will be kicking off their first official practice of the 2019 training camp Thursday afternoon.