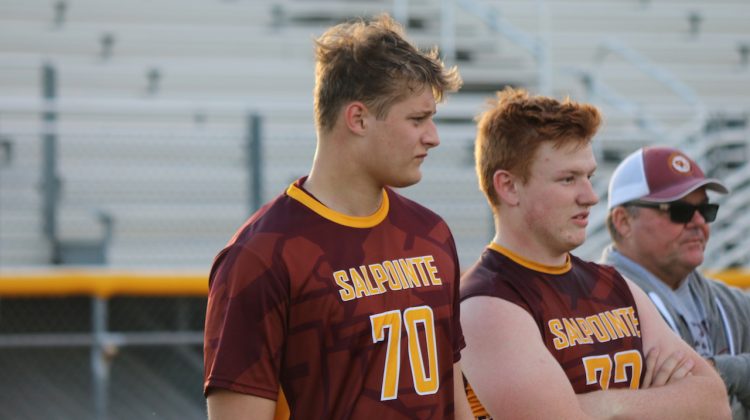 Salpointe Catholic offensive lineman Bruno Fina has had one of the more unique recruitments of the 2020 class. Prior to March 1st, the 6-4, 245-pound lineman didn’t have an offer.

Then Abilene Christian offered him.

It’s been a wild few months for the Fina family, but Bruno is ready to narrow his list to three: UCLA, Yale and Boston College with a commitment date set for July 30th.

A huge thank you to all the colleges who have offered me such great opportunities. Here are The Final Three. pic.twitter.com/npQlBna7ld

Fina wants to study marketing and management and minor in engineering. The 4.0 GPA student met with all three deans of the respective business schools of each college. The three finalists are very similar in the advantages in the classroom and on the field.

So here’s where the three finalists stand out:

I’ve known (UCLA offensive line coach Justin Frye) longer than any coach I’ve been in contact with. He’s already been a great mentor to me. We connect a lot, our chemistry is well-built. I’ve had plenty of talks with Chip Kelly as well and they have the chemistry on lock over there.

Had an amazing official visit at UCLA this weekend. Huge thanks to the players and staff! #gobruins #4sUp FOLLOW THE GOLDEN RULE @CoachJFrye pic.twitter.com/bSR2gLT23s

Fina said after his string of East Coast visits that Boston College made up the most ground when he got to take a closer look at the Eagles. Those feelings haven’t changed a month after his visit.

They play really hard, smash-mouth football. They’re going to grind the kids down and build them back up. That’s the attitude of their football team.

It’s one of the top universities in the world, there’s no doubt about that. It’s one of the greatest places you can go in terms of education. The amount of successful people that come out of there is amazing. If you go there, the people around you are the best in the world at what they do. Going there, I know I’m going to be pushed there in the classroom. I’ll be pushed by my coaches in football. It’s really going to make me the best version of myself being there and that’s really the big thing with all three of these places.

Excited to announce that after an amazing phone call with Coach Cerins, I have received a offer to play football at YALE UNIVERSITY. THANK YOU @CerinsMatt #LifeChangingU pic.twitter.com/y4NIbGKF3H

Fina also visited the hometown University of Arizona recently. Bruno’s father, John, played for the Wildcats before embarking on a NFL career. Fina was impressed with the Arizona program, but felt the opportunities outside of the state were too good to pass up.

“The U of A blew me out of the water. Being around my whole life and then seeing the inside (of the program) was completely different,” Fina said.

“I want to see the rest of the world. I want to see other opportunities are out there and move to a bigger city. I think education at those three are a little bit higher than at the U of A.”

It’s now down to three, and Fina feels each of the finalists can bring a lot to his life, it’s just a matter of sifting through the little things.

“It comes down to which details are most important to me, and that’s what I’m trying to determine right now.”