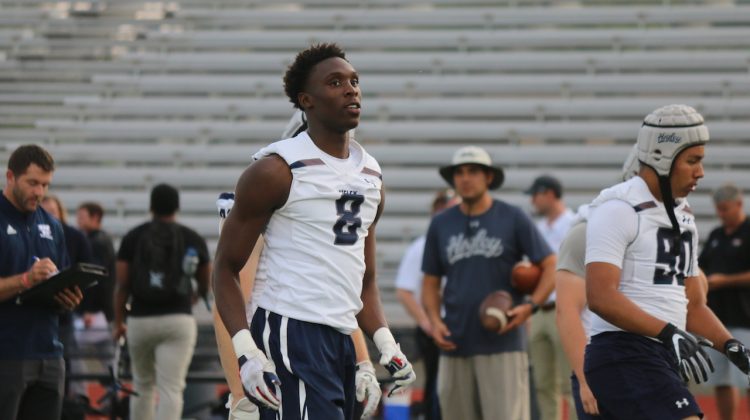 Higley defensive end/power forward Jason Harris has been one of the best multi-sport athletes in the state and country for multiple years.

The 6-foot-8 athlete’s offer sheet is as follows for both sports:

The multi-sport star said he considering playing both sports at the next level.

According to MaxPreps, he had 32 tackles, 11 tackles for loss and nine sacks in his junior season. He is an Under Armour All-American, and a highly coveted basketball prospect as well.

Let’s take a look at the group that remains for Harris:

The Wildcats were the earliest to offer him of this group, and his family has heavy ties to the university: his father, Sean Harris, was an All-American linebacker with Arizona. His mother, Cha-Ron, played basketball at the university and his older brother Jalen is currently playing defensive end for Kevin Sumlin. Harris has expressed interest in playing with his brother again. The duo teamed up at Desert Ridge High School when Jason was a freshman and Jalen was a senior. Jason transferred to Higley that following offseason.

“I love their weight room staff and Coach Sumlin and the rest of the coaching staff,” Harris said. “It feels like one big family. I feel like I’m always welcome there on-campus. It’s always a great time when I’m down in Tucson.”

Colorado offered him in February, and Harris unofficially visited in June. He made some connections with various members of the staff when he was checking out Boulder.

“I really like my positions coach (Colorado outside linebackers coach Brian Michalowski). He’s eager to learn and grow as a coach and knows a lot just being around other coaches. He has a great work ethic and I admire him a lot.”

Harris was at in Eugene this April for Oregon’s spring game, and could be a part of an Arizona class heading to Eugene. The Ducks are in the mix for the likes of Harris, Saguaro linebacker Damian Sellers, Saguaro offensive lineman Jaylan Jeffers and Hamilton receiver Brenden Rice.

He said having multiple Arizona guys with him in Oregon could help it feel like a home away from home, and one thing was clear when he visited.

UCLA’s coaching staff top to bottom has impressed Harris when he has interracted with them.

“Right off the jump, I could sense they were great, cool, genuine people,” Harris said.

“We watched practice film, and I watched how they practice and I felt a relationship with the (defensive line) coach and linebackers coach and (head coach Chip Kelly) and their whole staff basically.”

Texas A&M is the lone school outside the Pac-12 that made the list, and Harris has talked about the connection with Aggies head coach Jimbo Fisher and defensive coordinator Mike Elko, who also recruited Jalen Harris when Elko was on Notre Dame’s staff.

“I just felt like we built a good relationship when they offered me and before that. I talked to (Texas A&M defensive ends coach Terry Price) when he came by before. They’ve always been there and they’re known for producing great athletes that play my position.”

Harris said he is focusing on his hand-work and staying low as a senior. He has a visit to Texas A&M scheduled on October 12th when the Aggies host Alabama.

Harris said he doesn’t have a timeline for a commitment but will have one “soon.”