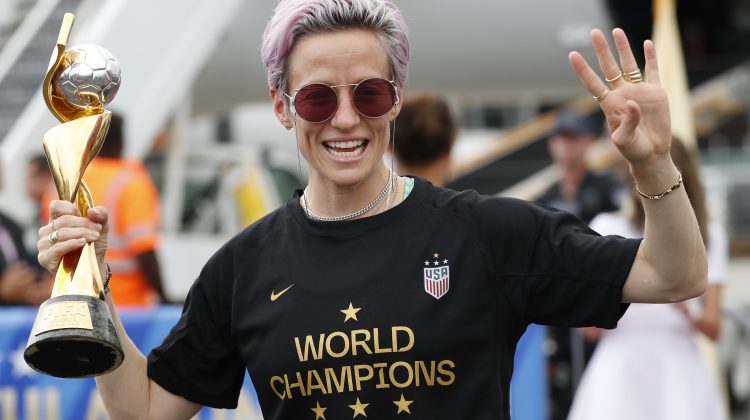 Our two daughters have had quite the week. One gave a powerful sermon Sunday at church, the other landed her “dream job” in the field of medicine. Both are doing cool things with their lives. Both also happen to be big fans of the USA World Cup Soccer Team. In all my years of playing and covering sports,, I’ve never quite understood the marginalization of women when it comes to pro sports in the USA. I’ve seen male athletes intentionally drop their towels in front of female reporters. I’ve had guys on the golf course suggest that women need to stay in the kitchen doing the dishes, not talking sports. When my daughter decided to go into ministry, I never gave one thought that men would be upset with a women giving a sermon. I was wrong.

This leads up to the USA winning the World Cup over the weekend. Hearing the crowd microphones pick up the chant of  “equal pay” was something new to me. President Trump  vs  Megan Rapinoe was a bigger story in many people’s minds than the World Cup itself. Rather than watching the exciting soccer that the USWNT played on their way to the title, there was story after story about the two personalities. Admiring and articulating how head coach Jill Ellis brought the team all the way through the tournament unscathed, didn’t compare to how the USA women’s side is underpaid vs the men.

I was the original play by-play voice of the WNBA Phoenix Mercury back in the late 90’s. We flew commercial, three to a row, had a small per diem, and the game was played below the rim. The rosters consisted of players who made more money playing overseas than in America. It wasn’t fair, it wasn’t right. The games were played in the summer to fill empty buildings. Attendance and sponsorship dollars were spotty at best. On the soccer front, demanding “equal pay” sounds good, but understand that the highest tier for women to be paid to play in the USA is the National Women’s Soccer League. The NWSL has a maximum salary of $46,200 per player. The minimum salary is $16,538 dollars. Each team has a hard salary cap of $421, 000. There’s nine teams in the League. So for less than 5-million dollars, you can fund the ENTIRE NWSL rosters. The National Women’s Soccer League recently agreed to a deal with ESPN for the rest of this season . Will this help in attracting new fans and sponsors? The NWSL has seven teams that average less than 5,000 fans per match.  Will turnstiles roll change with Alex Morgan returning to play for the Orlando franchise or Rapinoe for Reign FC  in Tacoma? When the NFL and College Football start-up in a couple of weeks, will big media outlets devote their prime blocks of programming to the NWSL or Monday Night Football? Will Rapinoe be playing on ESPN or ESPNU. Big difference in audience size and distribution.

Here in our great state, Phoenix Rising FC has a women’s side under its umbrella that plays in Tucson. Have you ever been to one of their matches? FC Tucson Women just finished their season with a 6-1-1 record in the WPSL.  Phoenix Del Sol played in the same league and went 3-4-1. Their home matches were at Reach 11 in North Phoenix. You want a women’s pro soccer league team  in Arizona? Gotta start somewhere.

There’s plenty of blame to go around on the lack of HUGE success for women’s pro leagues in the USA.  TV broadcasts that shoot games low and tight so not to show thousands of empty seats is a nice trick, but the reality is inflating attendance numbers for the “See, look at how many people showed up” crowd doesn’t help. More and more companies are being hit up for sponsorships on all sides by leagues and franchises. Are there enough quality players to fill out the rosters top to bottom?  Demanding equal pay requires more than just chants in a stadium.  My friend and former Arizona Republic columnist Paola Boivin, who works at the prestigious Arizona State Cronkite School, gave it to me straight. “It’s a matter of trying harder on all fronts”.  It’s as simple as buying tickets and making appointment viewing to watch the games. Media companies and sponsors have to give it time and be patient with the process. Of course I’d like to see the NWSL make it work, but we’ve seen the World Cup momentum in years past eventually die out until the next go-round.

One of my daughters landed a college soccer scholarship and it’s one of the greatest achievements of her life. I want to see more growth and opportunities for women’s sports, but here in Arizona we have a long, long,  long ways to go.