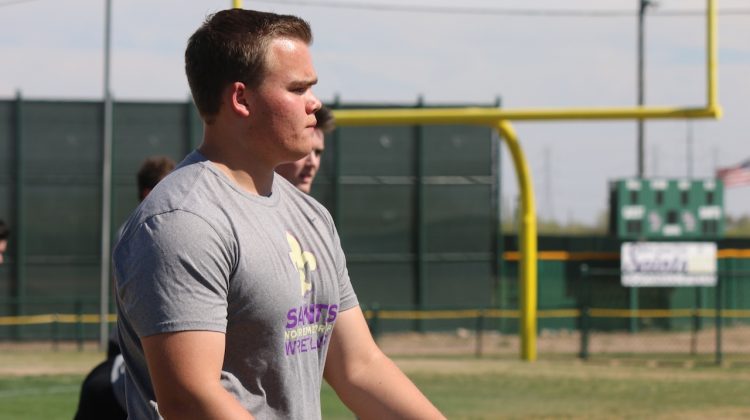 Notre Dame Prep offensive lineman Cade Bennett didn’t need much time to realize Oklahoma State was the spot for him while on an official visit with his family.

“The second me and my family showed up, it just felt like home,” Bennett said.

“Instantly, instead of being all formal about everything, they give you a hug and smack you on the back. All the wives of the coaches are all around and their kids and they’re all having a great time.”

The 6-foot-5, 290-pound lineman made it to Stillwater Thursday afternoon. By Friday morning, he knew he wanted to be a Cowboy, and he committed on Sunday night.

“I realized I had never felt the same way about any place. Just instantly I knew,” Bennett said. “I went home and I was going to wait a longer time, but I got home and just slept on it one night. There was no doubt in my mind.”

As a sophomore, Bennett played right tackle. The next year, he played right guard. The Cowboys want all of their lineman to have that versatility, and the coaching staff has kept their newest commit in the loop from the beginning.

Had an absolutely amazing visit at Oklahoma State!!! Unbelievable facilities and football program and even better people. Thank you @CoachGundy @Coach_Dickey @CoachLuceFB @CoachMeyersOSU for this great experience! pic.twitter.com/tkc6LgVBnD

Notre Dame Prep head football coach George Prelock has seen Bennett develop into one of the best offensive lineman in the state, something that happened behind the scenes.

“A lot of kids don’t like the practice but like going out on Friday nights. Cade is one of those kids that likes to go out there, likes the process and likes practice,” Prelock said.

Few have the experience Bennett possesses, playing 28 varsity games, and going 26-2 in those games, entering his senior season.

But both player and coach know the work is now really beginning to make sure Bennett is ready for the Big 12 conference a year from now.

“I’m just going to work and cut off body fat and do the best I can to show up there,” Bennett said. “I want to play early. I know it’s a hard thing to do, but I’m going to give it my best shot to put in the work.”

Prelock said his offensive lineman has put on 22 pounds of muscle since the end of the season and has transformed his body to become leaner and lighter on his feet.

“I think Cade knows this year he needs to improve on his technique,” Prelock said. “He needs to become faster…and finish more people if he can even do that because he finishes so many people. Just continue to perfect your craft.”

Prelock will keep an especially close eye to the Big 12 with Bennett heading to Oklahoma State, 2018 Gatorade Player of the Year and Notre Dame alum Jake Smith at Texas and former Saints offensive lineman Davis DiVall at Baylor.

“I’ll be rooting for my kids. I guess that’s the safe answer,” Prelock laughed. “We’re blessed to have a lot of good kids that have worked hard and have been blessed with talent to play at the next level.”