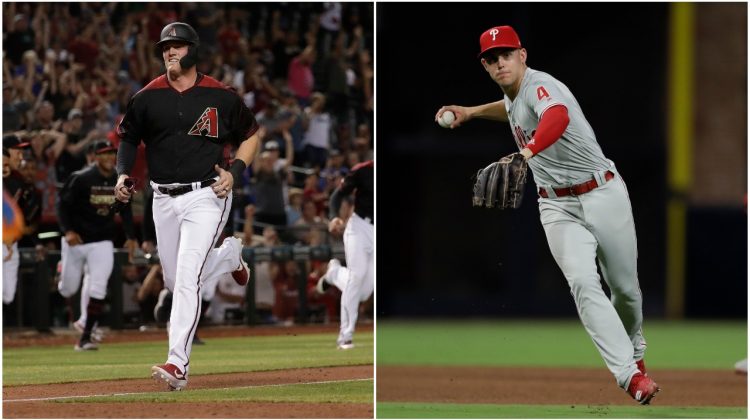 As part of their ten-game road trip, the Arizona Diamondbacks are stopping in the “City of Brotherly Love” to face the Philadelphia Phillies.

But for two players taking the field this series, this is more than just three regular games. It’s a reunion.

Kevin Cron from the Diamondbacks and Scott Kingery from the Phillies both played together at Mountain Pointe High School from 2009-2011.

“It’s hard to imagine a team with more talent. They were an unbelievable group of boys who loved each other,” stated their former head coach of the Mountain Pointe baseball team, Brandon Buck.

Back then, Cron was a pitcher and a catcher. His ERA during his senior season in 2011 was 2.26 with eight wins and one loss. On the other side of the plate, Cron hit for an average of .560 with 27 homeruns.

“Cron was one of the best hitter’s I’ve ever coached,” said Buck.

With Cron on the mound for the Pride, Kingery had his back at shortstop. In his sophomore year, his fielding average was .889. However, Kingery’s main contribution was at the plate. He hit for an average .495 with 39 RBIs in 2011.

“Scotty has the grit to just go. He knows his ability and is comfortable in it,” stated Buck.

The duo only played together for two years before Cron graduated in 2011.

Kevin Cron (@kevin_cron24) with a moonshot to left field for his first MLB dinger. We think you'll be seeing a lot more of those! #RattleOn pic.twitter.com/rFVq0nySkD

But those years were special, according to Buck. The Pride won the Division I State Championship in 2011 and were runners up in 2010.

Cron went on to play college ball at Texas Christian University. Drafted in 2014 by the Diamondbacks, Cron made his official MLB debut on May 24th, 2019. Between 2014 and 2019 Cron went through the minor league system.

During his time with the Reno Aces, the Diamondbacks Triple AAA affiliate, Kevin’s father, Chris, was the manager. When Kevin was called up to the majors, Chris was the one who was able to give him the news. Both father and son were able to share this once in a lifetime memory.

He describes that moment and much more on the Diamonds in the Desert podcast with Jordan Hamm:

After he graduated Mountain Pointe, Kingery walked on University of Arizona baseball team.

Kingery was consistent throughout the 2018 season hitting an average of .226 with 147 games played. This 2019 season is panning out to be even better for Kingery.

Scott Kingery has more extra-base hits (18) than singles (17) this season. The consistent power gives off a whiff of added sustainability, it’s not as if he’s dinking and dunking cheap knocks over a middle infielder’s head.

This series will be the first time that these former Pride members will face each other. But instead of a bitter rivalry, the reunion will be one of rejoice and love.

“None of these boys were caught up in being drafted. There was no selfish desire in them,” Buck reminisced. “On top of that, they are humbled individuals. They are thankful.”