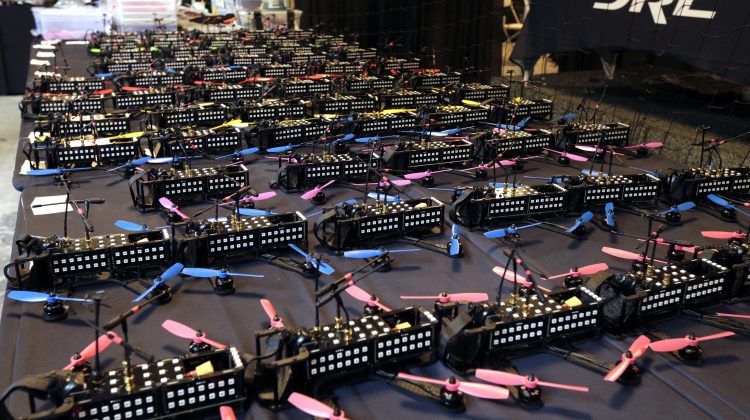 This Friday, March 18, 2016, photo shows drones readied prior to races held by the Drone Racing League at a vacant mall in Hawthorne, Calif. In drone racing, a crash means bits of plastic go flying, a replacement is grabbed, and no harm done. For now, bragging rights are the main stakes. Drone racing leagues would love to follow sports like poker into the mainstream with big TV audiences and sponsorships. But getting sponsors and fans is also a race against time. (AP Photo/Nick Ut)

Baseballs soon won’t be the only things flying around Chase Field. Instead, drones will take to the skies and race against one another at speeds up to 80 mph.

The Drone Racing League, or The DRL, will be racing in the home of the Arizona Diamondbacks on September 8th.

You might be asking yourself, what exactly is drone racing?

“We take drones that go 80 miles an hour with a little camera on them that feeds a video back to a pair of goggles that pilots wear,” explained DRL’s CEO and Founder Nicholas Horbaczewski to Sports360AZ.com. “The pilots can see what the drones see. It’s like you’re sitting in the cockpit of a drone. They can navigate these complex three-dimensional courses with incredible speeds.”

The DRL hasn’t been around long. Horbaczewski first started the league in 2015.

“It just blew my mind, it reminded me of “Star Wars” and pod racing,” Horbaczewski explained. “It felt like something that we could build a version of it that could appeal to a mass audience. So that’s what we set out to do in the early days of DRL.”

The race at Chase Field will be a part of the 2019 DRL season and this event is the first of its kind to be hosted at the stadium.

“We are bringing DRL in for the first year. We have had a lot of discussions about wanting to make this a tour stop for years to come. It’s a goal of theirs and it’s a goal of ours to create a fan base for drone racing,” said Vice President of Ticket Sales and Events, Ryan Holmstedt.

Those who have been to Chase Field before should expect something completely different from a D-backs game.

“They’ll see Chase Field in a way that they’ve never seen it before, from the perspective of the drones. It will be unlike any sporting event that they’ve ever been to,” said Horbaczewki.

While the fans may be excited, the pilots can’t wait to put this field to the test.

“Chase Field is one of the biggest MLB stadiums,” said 2018 DRL Champion Paul “Nurk” Nurkkala. “You don’t really get a sense of the scale of this place until you’re inside it. Thinking about that and thinking about the kinds of courses that we could have is going to be awesome.”

The DRL is unique when it comes to fans viewing the events. Since it was developed in the age of social media, the broadcasts of each race are available on both Twitter and NBC. However, for the people involved with the league, the only real way to experience an event is to see it live.

“The drones are so loud. That’s what people don’t expect. They are so loud and so powerful. We can fly them very close to the audience,” said Horbaczewski. “You get to really experience what it’s like. You can feel the wind coming off the propellers.”

If that all doesn’t get you excited to watch drone racing, then let “Nurk” convince you.

“it’s something new. It’s something that they haven’t seen before. It may sound a little bit funny, and a little bit nerdy, but it’s 99% people. It’s people who have put in so much work to create an awesome show for you, and it’s going to be incredible. You got to come out and check it out,” said Nurkkala.