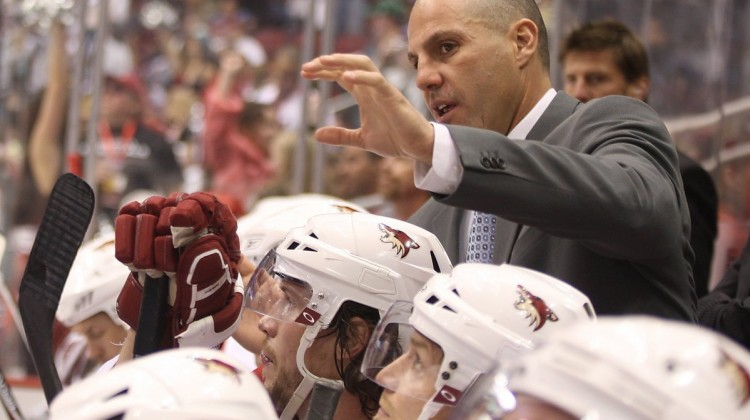 After taking Swedish defenseman Victor Soderstrom in the first round of Friday’s 2019 NHL Draft, Arizona Coyotes General Manager John Chayka and the rest of the organization were back to work as rounds 2-7 took place in Vancouver.

When the day was over, Chayka seemed content with where the organization stood after the draft festivities.

“We got the core piece up top and then we went with the volume approach and got a lot of really good players,” Chayka told reporters after the draft concluded. “High-ceiling, high character, and good skilled players that give us an opportunity to grow and replenish the system. We needed to have a big draft and we got a number of forwards which helps us replenish that area and keep growing.”

To start the day, the Coyotes traded their 74th overall pick to the Pittsburgh Penguins for picks 98, 151, and 207.

As Chayka noted above, a lot of forwards were taken. Here is a rundown of the selections made on Saturday:

Farinacci is a center from Red Bank, New Jersey who played high school hockey at Dexter Southfield School in Massachusetts. According to Elite Hockey Prospects, one of the 18-year-old’s best assets is his shot.

A right-handed sniper, Farinacci scored 12 goals and dished out 21 assists in 16 games played at Dexter. With a few years to develop, the 6-foot, 185-pound center is staying close to his high school before venturing on his journey to the NHL. He is currently committed to nearby Harvard University.

“We were everywhere. We had a good presence in all countries.”

Director of Scouting Lindsay Hofford sounds off on this year’s #NHLDraft and adding 7 Europeans to #OurPack: pic.twitter.com/F7Di4rNWZg

“I think my biggest asset is my good two-way game, and I would say my hockey IQ is my biggest attribute,” said Farinacci after being selected. “I’m a two-way forward who can win face-offs and kind of play on both ends.”

With this fourth round pick, the Coyotes got a 5-foot-11, 170-pound Finnish left wing. Maccelli had 72 points with the United States Hockey League’s Dubuque Fighting Saints. The 18-year-old also was a plus-8 when he was out on the ice.

As they did throughout the draft, the Coyotes stuck with a European player for their second pick in the fourth round. Darin is a forward who is a right-handed shooter. He tallied 57 points in 65 games during his play in Russia last year.

A 17-year old product of Oulu, Finland, Raty stands at 6-foot, 170 pounds. He is a right-handed shot and is known for his ability to forecheck.

Per HockeyProspect.com, Raty is described as an “effective forechecker with quick feet.” The winger had 52 points in 45 games last year for his Karpat U-20 junior team.

Romano had 47 points in 60 games last year during his time in the USHL. The Richmond Hill, Ontario native is a right-handed shot who is committed to Clarkson University in New York for the 2019-20 season.

After selecting six straight forwards, the Coyotes went with another Swedish defenseman late in the draft. 19-year-old Axel Bergkvist is a 5-foot-9, 201-pound blue-liner who accounted for 31 points between two different leagues in Sweden last season.

With their final pick, the Coyotes added one last forward. They went with Nussbaumer, who is a Swiss forward who played in the Quebec Major Junior Hockey League for the Shawinigan Cataractes. Nussbaumer had 38 points in 58 games, with 21 of those tallies coming from assists, proving that he has playmaking ability at just 18 years of age.