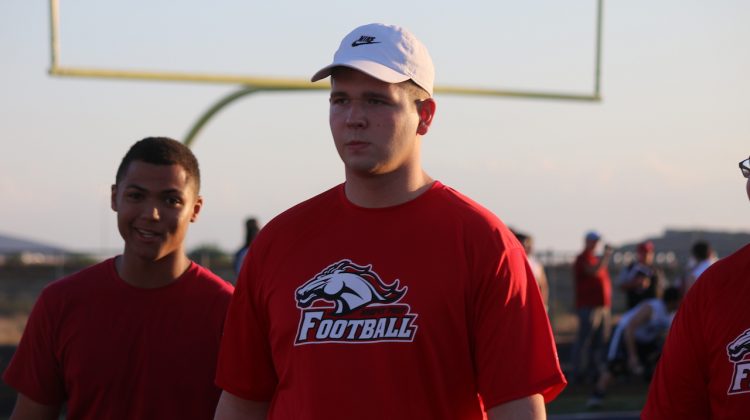 For Andrew Milek everything just felt right. So Friday night the talented Brophy College Prep offensive lineman made it official.

I am proud and honored to announce that I have committed to the University of Southern California!!! FAITH FAMILY FOOTBALL #FightOn ✌🏻@CoachDrev @USCCoachHelton @CoachHarrellUSC @CoachV_USC pic.twitter.com/xOwDE9uUIa

“USC is a storied program and academically they are one of the top institutions in the country,” Milek said to Sports360AZ.com shortly after making his decision. “I loved the campus and felt like I was at home. [It] had a great feel and frankly, the coaches were sincere, relatable and genuine.”

Milek had seen his recruiting take off in a state rich with talented big men. He noted the nice connection with the SC players he has gotten to know and says he felt it was a priority to play close to home in a Power Five conference.

“Absolutely,” Milek explained. “It’s a one hour flight and six-hour drive from home. I grew up watching the Pac-12 and have always had aspirations to play at that level.”

Milek also likes the fact the Trojans play a challenging non-conference schedule littered with power programs from around the country.

Although he is expected to redshirt, the USC coaches conveyed to him that he is athletic enough to play and contribute early in his Trojan career.

“I look forward to working hard, being developed and having an opportunity to compete,” the massive 6-foot-5, 284-pounder said.

Someone told me today that Brophy didnt attract athletes any more…hmmm. Ask Andrew Milek about that.

He also credits first-year BCP head coach Jason Jewell for guiding him throughout the recruiting process.

“He helped me a great deal,” he said. “He stressed the importance of choosing a college based on academics and to choose a school that I would enjoy attending even if I did not play football there. Coach Jewell was always available and game me good counsel.”

Jewell believes the sky is the limit for his senior leader.

“Andrew is an incredible young man and has a bright future,” he said to Sports360AZ.com. “He has the ability to play multiple spots on the line. Before we were hired at Brophy, I felt Andrew was a Power Five player. Since arriving on campus four months ago, he has cemented that thought.”