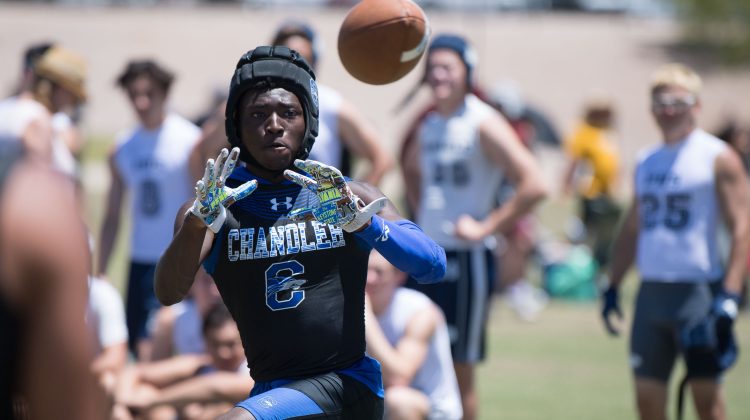 Goodbye spring football 2019, hello 7-on-7’s. It seems everyone has an opinion on “7’s” but for now let’s just focus in a few things I saw from high schools around Arizona this month.

State forty-eight has produced more than a handful of talented quarterbacks this decade and don’t expect that to change anytime soon. Last summer I introduced you to Desert Edge’s Adryan Lara, this spring it was Salpointe’s Treyson Bourguet.

It’s going to be fun to watch these young men grow and improve over the next three years.

Horizon has certainly seen the gains in the weight room this off-season. The Huskies had a number of close losses in 2018 and lose a handful of playmakers but there’s optimism moving forward, especially up front.

.@hzfbfamily finishing up their 6:00A workout 🏋🏻‍♂️ earlier this morning. Expect this to be easily #Huskies strongest 💪🏻 👀 team in several years. #MorningGrind #Gains 💯 pic.twitter.com/1nYmKydJA5

The coaches were impressed this spring with a trio of players: guard Ethan Lavursky, defensive end Kyle Lewis and nose guard Elijah Anau. Head coach Ty Wisdom said the three showed leadership on and off the field and will be key contributors this fall.

First-year head coach Jason Jewell has jumped into the fire feet first this off-season. The Broncos made a significant jump last year under Jon Kitna and Jewell is hoping to keep the forward momentum going at BCP. Jewell has spoke at length about his team’s character and work ethic.

A little lightning didnt stop us from getting work done in our top of the line weight room. pic.twitter.com/H3s7iyYTTV

There is both young talent and depth on the roster.

A few names to watch this fall include senior running back/cornerback Andre Eden who averaged over six yards a carry last year, three-sport athlete Regis Valez who will play football at the next level and 6-foot-6 sophomore wide receiver/tight end Tyler Powell who already holds offers from Auburn and Idaho.

It’s too early to tell if a new voice and fresh philosophy will lead to more wins at Verrado but it’s safe to say spring was an overwhelming success for first-year head coach Shawn Copeland. His young, positive energy brought a much-needed change to the successful west Valley program.

The focus of the offense will be around talented junior running back Logan Gingg who tallied nearly 900 yards of total offense in 2018.

While the defense will certainly miss stud defensive end Jonathon Parks, Logan’s older brother Conrad Gingg will look to pick up the slack this fall. The senior outside linebacker/strong safety had 74 tackles and seven sacks last year.

The Vipers also have the luxury of veteran kicker/punter Robert Liss who is one of the top specialists in Arizona.

Let me be the first to apologize to all defensive coordinators on Chandler’s upcoming schedule in the coming years.

Yes, the Wolves lose offensive mainstays like Jacob Conover, Decarlos Brooks, Brayden Liebrock and Daseau Puffer but the roster is still littered with playmakers, particularly at running back.

Quaron Adams, Nicolas Nesbitt, Jeremiah Tyler and Jaheim Brown-Taylor present a pick-your-poison-type situation out of the backfield. Add mobile junior quarterback Mikey Keene to the mix and it’s not difficult to see why new head coach Rick Garretson has few concerns on offense heading into the summer.

Chandler rushed for close to 4000 yards last year. Don’t be surprised to see that number balloon in 2019.