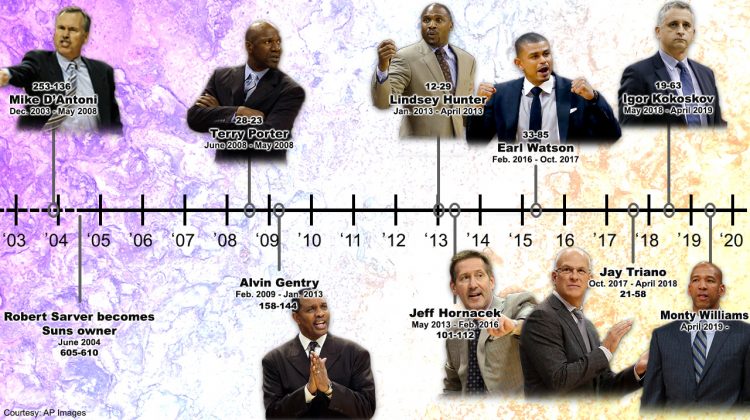 For the seventh time in owner Robert Sarver’s 15-year tenure, the Phoenix Suns have a new head coach.

As we await the NBA Lottery – where the Suns could nab the number one overall pick for the second year in a row – let’s whip through the eight head coaches who have called Phoenix home in the Robert Sarver era.

Mike D’Antoni picked up the pieces of an 8-13 team following the firing of second-year coach, Frank Johnson. In D’Antoni’s first full season, he would take the Suns to the Western Conference Finals and was named coach of the year in 2004-05. Under D’Antoni, the Suns led the NBA in scoring for three consecutive years (2004-07), after acquiring point guard Steve Nash entering the 2004 season.

After losing in the first round of the 2008 playoffs to the San Antonio Spurs, D’Antoni was given permission from the organization to seek other jobs even with two years remaining on his contract. Since D’Antoni’s departure from Phoenix, he has coached the Knicks, Lakers, and currently the Rockets after being an associate head coach with the 76ers.

D’Antoni holds a winning percentage of just .524 since leaving the Suns but has accumulated a .703 win percentage with Houston, a better percentage than from his time in Phoenix.

Congratulations to former Suns coach Mike D’Antoni for winning Coach of the Year. His Rockets are a top 10 offensive team in NBA history. pic.twitter.com/F8HGieqZoF

The ensuing coaching search led to the hiring of Terry Porter who took the Bucks to the playoffs in his first ever season as an NBA head coach over four years before.

Prior to becoming a head coach, Porter played in the NBA for 17 seasons including a stint in San Antonio playing beside then-Suns General Manager, Steve Kerr.

Expectations of maintaining the Suns high tempo offense while adding a more defensive philosophy was too big of a bite to chew for Porter, eventually getting him fired only four months into the season with a 28-23 record.

Porter would not return to the NBA as a head coach but spent three seasons as an assistant for the Timberwolves. Porter now is the head coach for the University of Portland Men’s Basketball Program.

2/16/09 – After a poor start to his tenure as head coach of the Phoenix Suns, Terry Porter is fired and Alvin Gentry is promoted to head coach. Porter attempted to install a slower offense, but Phoenix was in 9th place with a 28-23 record at the all-star break. #TimeToRise pic.twitter.com/fBb3zk9NCa

To fill the head coaching void, the Suns selected Alvin Genty to be the next Suns head coach coming out of the All-Star break. Gentry spent seven seasons as a head coach with the Heat, Pistons, and Clippers before becoming an assistant with the Suns.

After missing the playoffs, Gentry’s first full season saw a ray of hope ending the year 54-28 making it to the Western Conference Finals, the Suns best season since 2006. The team in 2009-2010 was filled with veteran stars Steve Nash, Amar’e Stoudemire, Jason Richardson, Grant Hill and more.

The following offseason began a downward spiral, though, beginning with Stoudemire opting out of his contract in 2010 and trading Leandro Barbosa. By time the 2012 season began, Nash, Hill, and Richardson had all gone separate ways with little to show for it. The 2012 Suns roster only featured two players with more than five years of experience in the league.

Following a 13-28 start in 2012, the Suns terminated Gentry before the final year of his contract was completed.

After being fired in 2013, Gentry found another head coaching position with New Orleans in 2015 and has been at the helm ever since, accumulating a 145-183 record and only one trip to the postseason.

#Suns coach Alvin Gentry giving us the weather report…struggling without his glasses though pic.twitter.com/PLkZ3qtk

Many believed the man to pick up the remaining pieces of the Suns was a long-time assistant and former Sun Dan Majerle. Another assistant on the team was Elston Turner, who had been assistant coaching since 1996.

New Suns GM Lance Blanks decided to select Lindsey Hunter, a member of the Suns player development staff, to lead the team to the end of 2013 instead.

Hunter would only win 12 of the final 41 games of 2013 as the interim head coach, ending the season 25-57 collectively, the worst season since Phoenix’s inaugural year.

Hunter was not selected as the head coach for the following season. He would not coach in the NBA again but was named head coach of Mississippi Valley in April 2019.

New GM, Ryan McDonough, hired former Sun and three-year Utah assistant, Jeff Hornacek, to led the team into the 2013-2014 season. In a tough Western Conference, Hornacek missed the playoffs in his first season, even with a 48-34 record.

Hornacek’s team featured defensive veterans P.J. Tucker and Gerald Green while also bringing back point guard Goran Dragic who played behind Steve Nash in his later years. The 2014 offseason introduced the infamous “three-headed point guard” attempting to incorporate Dragic, Eric Bledsoe, and Isaiah Thomas all into the starting lineup as natural point guards. The idea was scrapped midseason and traded Thomas and Dragic without much to show for it. The Suns would fall out of playoff contention and end the season 39-43.

Hornacek got the boot from Phoenix the following season after a 14-35 start to 2015.

Hornacek would move on to coach the New York Knicks before being dismissed once again following a .366 win percentage after just more than two seasons.

After 12 years playing in the league and less than one year as a Suns assistant, Earl Watson was selected to be at the helm of the Suns to end the 2016 season. Watson closed the year with a 9-24 record with a team who only saw Tucker play all 82 games. Only Mirza Teletovic, Alex Len, and rookie, Devin Booker, played in more than 70 games.

2016-2017 ended with a 23-59 record, the worst season since the Suns inaugural year. Watson was selected as the new head coach to continue leading the team, but would only see a one-game improvement in his first full season.

It was reported that Watson received a two-week notice before the beginning of the 2017 season and was officially fired three games into the season.

Watson has not coached in the NBA since.

P.J. Tucker and @Earl_Watson unveiled the design for our upcoming Suns staff playground build that will benefit the children of Guadalupe. pic.twitter.com/pSEjr1Cb5Y

With 79 games left in the 2017-2018 season, former Toronto Raptors head coach, Jay Triano, was picked to be the Suns interim head coach.

The Suns would end the year 21-61, a new worst record since the Suns inaugural season. Devin Booker, T.J. Warren, and Josh Jackson led the team in scoring. Triano would not be chosen as the head coach of the future for the Suns.

Triano is now an assistant with the Charlotte Hornets.

“He’s excited for me and excited for the organization.” Interim Head Coach Jay Triano on talking to Steve Nash pic.twitter.com/JW9upmKIWw

For the first time in the Suns history, the number one overall pick in the NBA Draft belonged to Phoenix. Meanwhile, in the front office, former Suns player James Jones shared GM duties with Trevor Bukstein. The Suns selected long-time assistant Igor Kokoskov over Jay Triano to take the drivers keys.

Only 22-year-old Mikal Bridges played in all 82 games and the Suns top five scorers were all aged 25 or younger.

The season would end with only 19 wins, and for the third year in a row, the worst season in Suns history besides the inaugural year. Kokoskov is the first fired head coach to get the boot after the conclusion of a season under Sarver, not counting interim coaches.

Kokoskov has yet to find another coaching position.

The Phoenix Suns have fired head coach Igor Kokoškov after just one season.

The Suns will now be looking for their 7th different coach in an 8-season span.

Kokoškov’s .232 winning pct is the worst by any coach in Suns franchise history. pic.twitter.com/YStxX1Ir9x

At the end of the 2018-2019 season, Robert Sarver’s team holds an under-.500 record for the first time in his tenure. With 605 wins and 610 losses, Robert Sarver watches his Suns head into the 2019 offseason with the opportunity to receive the first overall pick for the second year in a row and his eighth different head coach since 2004.

The Suns have agreed to terms with Monty Williams to become the 20th head coach in franchise history! pic.twitter.com/Wm7tU8agIX