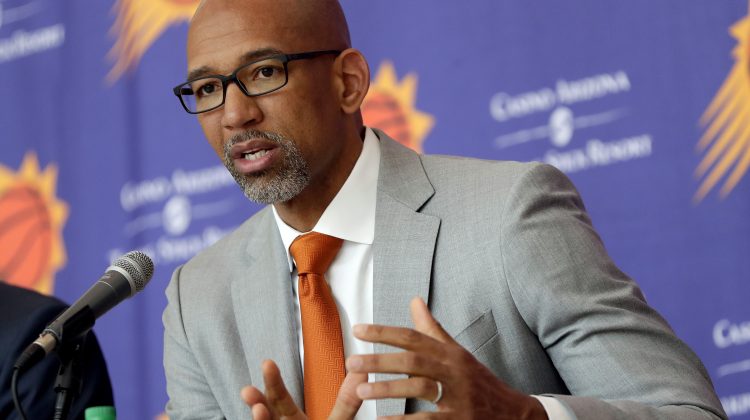 There was a glimmer in the eyes of many people before the Suns introduced Monty Williams as their head coach on Tuesday. No, the people I’m referring to weren’t fans, they are employees of the once proud franchise.
Some of the best people in the Valley sports scene are with the Phoenix Suns. They’ve handled themselves in a professional manner throughout this 8-year stretch of hell that has left the team without a single playoff appearance. Imagine going to work everyday knowing that the likely outcome is a loss. Over and over and over and…you get the idea.
The only person that I didn’t get to chat with was Owner Robert Sarver. He wasn’t at this happy day(of if he was, I missed him) Perhaps it was better that he wasn’t in attendance, so as not to take away from the moment for the new bench boss. I want an owner who show’s up when times are bad. It’s easy to be at a hiring. It’s more important to be out front when the darkest days hit a franchise. Not a big deal, not running into the owner.
Before the “if Robert stays out of the way” talk takes over your mind. just look at the roster today. IF Monty Williams and James Jones connect with this group, they are going to start winning.
In my opinion the Suns appear to be close to breaking through. Get a point guard. Find ways to improve and refine the games of Devon Booker and Deandre Ayton. Grab a point guard. Remove the logjam of forwards on the roster. Seek out a point guard. Lastly, it would be great if they could solve the hole at point guard.
Get the picture?
Is Ayton ahead of where Amar’e Stoudimire was in year two?
Is Kelly Oubre a close version of Shawn Marion?
Is Booker one of the top emerging stars in the League?
While nothing is a given in sports, I’d be surprised if GM James Jones and Williams can’t convince a solid free agent to come to Phoenix. I’m not suggesting that Kevin Durant is arriving on July 1st, but the credibility factor went up quite a bit in my book once Williams came on board. The Suns have struggled to get anyone of substance interested in signing here. Embarrassing.
For the first time in many, many years, the upcoming NBA season should be interesting for Suns fans. If we’re being honest, that hasn’t been the case in several seasons. It was nice to see some eyes sparkle in downtown Phoenix today.