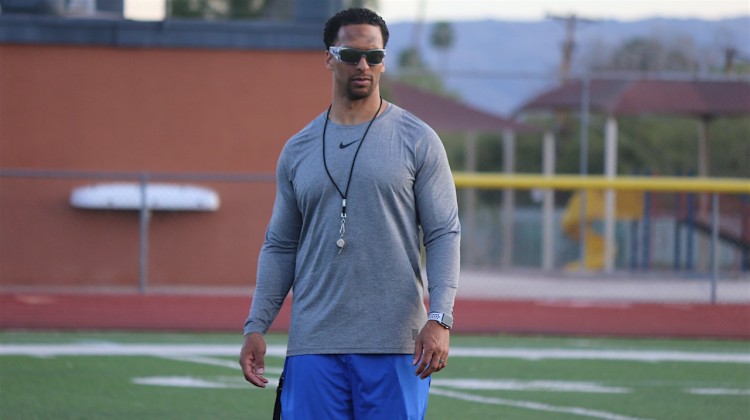 What do Aaron Rodgers, Carson Palmer, Tom Brady, and Kadin Beler have in common? According to Arcadia High School varsity football head coach Kerry Taylor, they are elite quarterbacks.

I had the privilege to catch passes from Tom Brady, Aaron Rodgers & Carson Palmer in my career. When I say @kbeler23 is the next big QB coming out of AZ, just watch. Already executing an NFL offense. Kid is special. #TitanUp #ForTheCulture pic.twitter.com/4P0Fohoizr

Twitter has become an important part of the recruitment process for high school players and head coaches. In fact, it helps bring college eyes to more overlooked players and give them a chance at playing at the next level.

“You can’t just sit back and do things that were done 15-20 years ago, or even five years ago,” said Taylor. “It’s almost more of a business now than anything. It’s not just getting guys recruited, but it’s how to get them out there, how to get them in the right spotlights, and the right scenes.”

You wouldn’t be the first to assume, that if Beler’s coach is comparing him to some of the best quarterbacks to ever play the game, then upcoming senior must be something. The main motivation for Taylor’s tweet was to help gather some college recruiting eyes on Beler.

“We have a lot of talent here and people just don’t know about it, because the program in the past hasn’t had a lot of success,” stated Taylor.

Last season, Beler started the varsity squad as a junior and helped lead his team to the best season they’ve had since 2015. Arcadia went 6-4, a major improvement from the winless seasons that had plagued them for the last two years. Over the course of the season, he threw for 1,718 yards and rushed an additional 746 yards. Beler was responsible for a total of 30 TDs with 16 of them passing and 14 of them rushing.

To the average fan, those stats are pretty solid. No one can deny that Beler was a factor in helping the Titans bounce back after that tough spell. But, the question remains on how Beler compares to the legends his coach thinks he’s a part of.

Brady started the Junipero Serra high school football team way back in 1994 and 1995. During those two season, Brady had a total of 3,702 yards and 31 touchdowns.

While during 1996 and 1997, Palmer led his Rancho Santa Margarita high school football team to two straight CIF championships. As a senior, he threw 31 touchdowns and had a 25-game winning streak going into his time at USC. Throughout his career he threw for 4,279 yards and had a 183 total QB rating, according to the Santa Margarita Eagles Alumni site.

Rodgers started the varsity team at Pleasant Valley high school his junior and senior year in 2001 and 2002. During his tenure, his team went 17-7 and made the CIF Northern Section Playoffs. Rodgers threw for a total of 4,419 yards and even set a school record of 2,318 yards during his senior season.

Even way back in high school, these quarterbacks were setting the bar high. Multiple records were broken, championships were won, and legacies were made. Does Beler belong in the same ranking, maybe not yet. But he still an entire senior season for him to prove himself to the world. But one thing’s for certain, he has his head coach, Twitter followers included, supporting him.