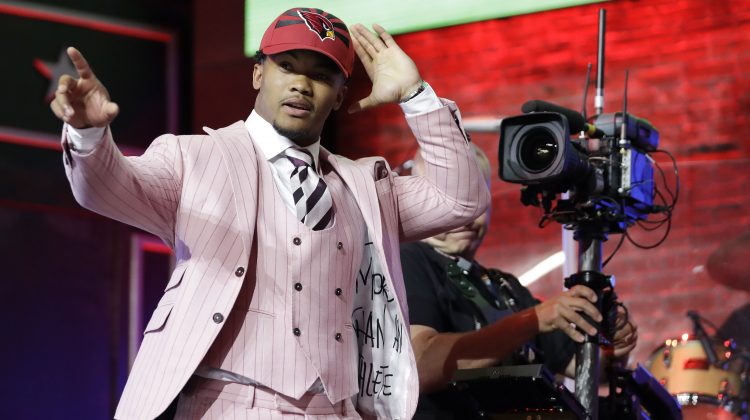 It appears Kyler Murray will be in Cardinals Red and become the new QB of Birdgang in Arizona. The Arizona Cardinals selected Oklahoma quarterback, Kyler Murray with the number one overall pick in the 2019 NFL Draft on Thursday night, and per the usual, Twitter had plenty of voices tossing out opinions on the new Cardinals youngster.

None other than 5’11” NFL quarterback and former baseball player, Russell Wilson had to jump into the Kyler Murray congratulations on Thursday night. Murray was often compared to the Seattle Seahawks QB leading up to draft due to their sub-six-foot height.

And of course, his new teammates chimed in, including former teammate Ricky Seals-Jones.

It’s crazy having former teammates from college as your teammates in the league! Welcome to the squad @TheKylerMurray #BeRedSeeRed

This season will be one for the books. I feel it..

Speaking of NFL quarterback reactions, the last Oklahoma QB to go number one overall tossed in some of his excitement. The 2018 top pick, Baker Mayfield, will lead his Browns against the Cardinals in Week 15 where Murray could be at the helm of the offense.

See you in December @TheKylerMurray 😉

As for the next potential QB that can give the Sooners a third straight quarterback picked in the first round next year, well, he had an interesting reaction…

Some are questioning the selection of Kyler Murray and expect an explanation for why the Cardinals picked a quarterback instead of filling other needs. The answer may lie in a tweet posted moments before the draft from country music star, Blake Shelton, threatening to wrap his guitar around General Manager Steve Keim’s neck.

Getting excited about the draft tonight!! Steve Keim I will personally wrap my guitar around your neck if don’t take my boy @TheKylerMurray!!! #arizonacardinals @AZCardinals

It appears the threat is all in fun though. Just another opportunity for Shelton to give Keim yet one more big smooch for the ‘Gram.

Even with the selection of a quarterback with the number one overall pick, last year’s first-round draft pick, Josh Rosen, is still on the Cardinals roster. It turns out the young QB has already sent out his congratulations to Kyler Murray, three and a half years ago.

This old Instagram post from October of 2015 has resurfaced on Twitter where Rosen and Murray met up at quarterback camp. Josh Rosen has not released anything on social media, or to the media for that matter, and still remains on the roster after the first day of the draft.

More Excitement Across the Desert

The last time an Arizona pro sports team held the number one overall pick? The Phoenix Suns did last year in the NBA. They wanted to check and make sure they had as much fun with the pick as the Cardinals did tonight.

Meanwhile, the ‘Yotes and Dbacks also gave a warm welcome to the new Cards QB. We will wait and see how long till Kyler Murray makes his way to Chase Field for a first pitch. (Can anyone have him do some batting practice too?)

We think you’re going to like it here. pic.twitter.com/D0YxY4e92L

The Arizona Cardinals still hold ten picks over the next two days and many athletes that hail from the state of Arizona still remain undrafted. Keep it to Sports360AZ for more news and reaction from the 2019 NFL Draft.