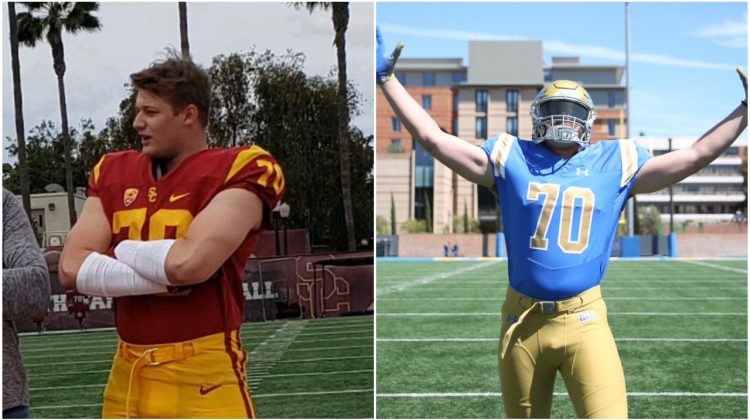 Salpointe Catholic offensive lineman Bruno Fina had been tabbed as an “up and coming” recruit in the 2020 class.

There had been an anticipation that a Power 5 program could come in and offer one of the anchors of the Lancers’ run game.

Turns out two programs did just that in about 48 hours.

On Friday, USC offered Fina while on a visit. On Sunday, UCLA extended an offer 24 hours after the offensive lineman had been on campus.

Fina said he’ll never forget meeting with Trojans head coach Clay Helton when he was on campus. Helton had some high praise for the offesnive lineman, saying he could see Fina leading the program in a few short years.

“(Helton) recognized that this offer was a little bit premature and that I’m still an undersized tackle,” Fina said. “He said that just talking to me and seeing the way I carry myself as a person, he can see the type of person I am and that I really belong at that program.”

Words cannot describe how it feels to announce that as of yesterday I have received an official scholarship offer from the University of Southern California!! Thank you @USCCoachHelton @CoachDrev and @CoachJohnBaxter !! #FightOn✌🏼 pic.twitter.com/aWnWlLnOH2

The trip to Westwood was equally productive, offensive line coach Justin Frye had been leading the charge on Fina’s recruitment.

“I went out there and when (Coach Frye) called me…he said they had a few more boxes they wanted to check off with me because they were very selective in their recruiting and they offer very few kids,” Fina said.

“He said they checked off all the boxes for me and some more.”

After an amazing visit at UCLA with coach Chip Kelly and @CoachJFrye I am excited to announce that I have received an offer to play football at the University of California Los Angeles!! #4sUp #GoBruins🐻 pic.twitter.com/9d3IEw8Ntf

Currently, Fina may be a little undersized as a Power 5 offensive tackle, but both staffs could see there was plenty of growth ahead of him.

As Fina puts it, “Frame is the thing I do have.”

Fina has the work ethic and God-given size from his father, John Fina, who played for the Lancers, the University of Arizona and the Buffalo Bills. The younger Fina seems primed to add some bulk to his 6-foot-4, 240-pound frame.

“UCLA measured my wrist size, my knee size, my ankle size, my wingspan and they’re all larger than my dad,” Fina said. “They got really excited when they saw I have the frame to put on all this weight, but I just have it on yet.”

Fina said he plans to add 15 more pounds by the start of his senior season and to be up to 280-290 pounds by the time he heads off to college.

The lineman played predominantly guard as a junior and saw time as a tackle and jumbo tight end. He said head coach Dennis Bene has told him he will be the Lancers’ left tackle. He’s been using this offseason to prepare for his senior season and beyond, focusing on footwork and the mental side of the game.

“Every day I’ll come home from school and (my dad) will ask me, ‘Did you jump rope?’” Fina said. “For me and for him, the most important thing has been footwork and technique. I don’t believe I’ll ever be the strongest guy on the field, but I will hone my craft to be the most perfect.”

The 4.0 student said he has an idea of what his major will be. Mechanical engineering has jumped out to him because his grandfather thrived in that field, holding seven patents.

“My mom always tells me I have his mind, so I think that’s a profession I think I would really enjoy and be good at.”

He could also get involved in business management because he enjoys working with people and hearing new perspectives, something he’s experienced a lot while on his visits to colleges.

Fina also said the leadership of Bijan Robinson and Lathan Ransom has helped the Lancers become one of the top teams in the state and been a resource to fellow Lancers and their recruitments.

“I’ll always say Bijan and Lathan have been an inspiration to the team,” Fina said. “I don’t think our culture would be the same if they didn’t have someone right in front of them to look up to. It’s really just a reminder every day that they’re kids just like you. I’ve talked to Bijan a lot about what’s been going on recently, and he’s been a big mentor to me. It’s been awesome having them here.”

Fina said he has already heard from multiple other programs since receiving the USC and UCLA offers and plans to attend camps this summer at Stanford, Rice, Yale and multiple other Ivy League schools.