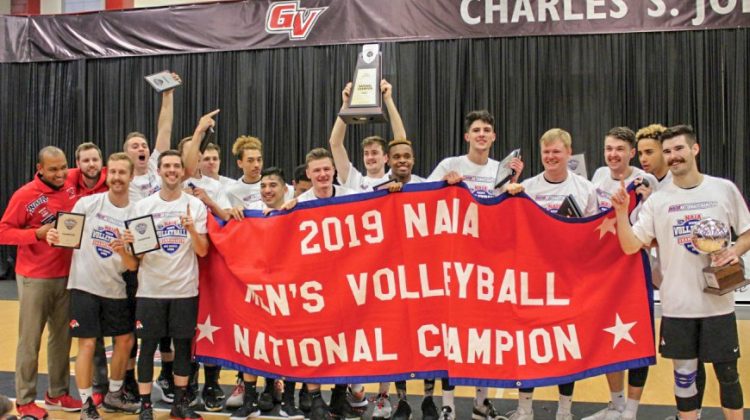 A college national championship trophy has made its way to Mesa.

For the first time in the five-year history of Benedictine University at Mesa Athletics, a Redhawk program has brought an NAIA National Championship to the desert. Filled with local talent, Redhawks Men’s Volleyball completed a program-best 26-4 season en route to winning the inaugural NAIA Championship Tournament for men’s volleyball.

Domination was a common theme in 2019 after falling short in the title match last year when the post-season tournament still held NAIA Invitational status. The Redhawks only dropped two sets through five matches in pool play and the tournament, including a three-set sweep of Aquinas College (MI) in the title match.

BenU Mesa entered pool play on Tuesday as the third-ranked team sweeping all but one team to meet a first-year program, Aquinas College for the title. The Redhawks took advantage of the Aquinas Saints’ errors throughout the match and found success at the net.

Through serving, attacking, and receiving, BenU Mesa suffered nine fewer errors than the Saints over three sets and knocked down 44 kills for a hitting percentage of 0.367. BenU Mesa and Aquinas would tie ten times before the Redhawks would squeak out 25-22 set-one win, followed by a runaway in set two for a 25-20 victory. The Redhawks would dominate in the third set nearly scoring on half of their attacks and stole a 25-14 set-three victory to lock up the title.

“We came out tonight on a mission, we talked a lot about this moment since last year when we lost in the final,” Lewis told the NAIA postgame. “We said that we want to be here again, and we refused to be anything but the champions.

“I cannot be more grateful to have coached this group of guys this year. I’m so proud of them and elated for this experience.”

“It’s just been an insane run for us from being runner ups last year,” Adcock said postgame. “We came in, worked hard and had a chip on our shoulder the rest of the year.

“I can’t say how happy we are to have done this together as an entire team.”

Love this kid!!! Came to Ben U Mesa 5 years ago on a vision. 5 years later he’s a national champion, all-american and tournament MVP. Proud of you Logan!! pic.twitter.com/2WMQ8PqfNq

The squad also reigned victorious in the GSAC season standings and won the GSAC Tournament.

Under second-year coach, Ray Lewis, the Redhawks swept 17 opponents in straight sets and won 25 of their final 26 games to complete their 2019 championship run.

This video will never get old!!! pic.twitter.com/7AkOHDfNET