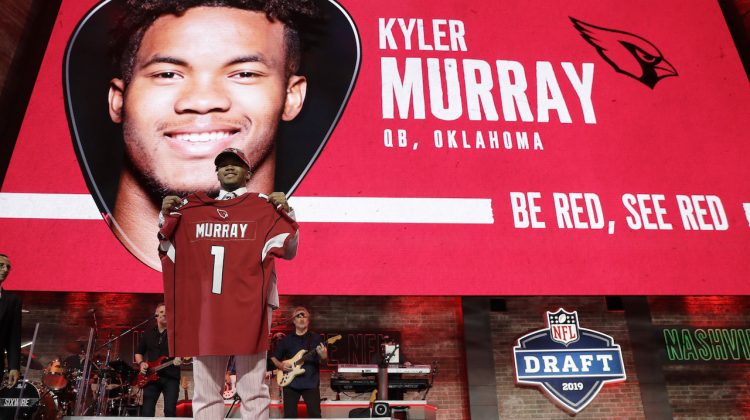 The reports were unclear leading into Thursday’s first round of the NFL draft. Would the Arizona Cardinals kick off the draft selecting a quarterback in the top-10 for the second straight year? Would they focus on the defensive line, where Quinnen Williams and Nick Bosa were headlining the draft rankings?

According to Cardinals general manager Steve Keim, the decision was vetted thoroughly, but became an easy one. The best move for the team was to draft Oklahoma quarterback Kyler Murray.

“The more and more we dug in, the more it became crystal clear that Kyler Murray was the pick,” Keim said.

“I’ve been doing this for 20 years. I’ve seen guys who have thrown it like him. I’ve seen guys who can run it like him. But I can tell you that I haven’t seen anybody that can do the combination that he brings to the table: the ability to throw the football with timing, accuracy and touch and to be able to run the football, extend plays and create like he does out of the pocket.“

The moment Kyler Murray found out he was being drafted as the No. 1 pick of the #NFLDraft 👏 pic.twitter.com/jv1JTEXeE8

But Keim said the triumvirate of Michael Bidwill, Kliff Kingsbury and himself needed to get to that decision organically, and it was one the general manager did not want to approach at first.

“I’m not going to lie to you, I was reluctant,” Keim said. “I didn’t want to watch (Murray’s) tape, and I didn’t want to fall in love with the player, but as I watched more and more and I saw the things he can do…I haven’t seen one in the time I’ve been doing it that possesses that skill set.”

Kingsbury and Murray go back much further than this draft process. When Kingsbury was the head coach of Texas Tech, he recruited the dual-threat quarterback to be a Red Raider. Murray opted to become a Texas A&M Aggie and eventually transfer to Oklahoma, but the foundation for a relationship between Kingsbury and his eventual draft pick was certainly in place.

“I cannot wait (to play for Kingsbury),” Murray said. “Me and him have had a relationship since I was like 15 years old. This is something we’ve talked about for a long time. It’s been a long time coming. God works in mysterious ways. For me to be playing for him now is a surreal feeling.”

But the relationship didn’t linger when the recruitment was done. Last year, when Murray was taking over the reigns for Heisman trophy winner and 2018 top draft pick Baker Mayfield, many questioned if Murray’s frame could hold up over a college football season. Kingsbury wanted to share with Murray that his style of play was would cater to what the NFL was becoming.

“Last year as the season went on and I saw where I thought it was going and the success (Patrick Mahomes) and (Baker Mayfield) were having,” Kingsbury said. “I just felt like he was the next guy, so I just wanted to make sure he knew…I just wanted to be encouraging for him.”

Now, Murray and Kingsbury will come together as Cardinals. A long recruitment, if you will.

“Coming from similar offenses and knowing the type of style that we run in the Big 12, and he knows what I’m capable of,” Murray said of Kingsbury. “So, having a coach that believes in you and is going to be behind you, not playing on eggshells and stuff like that, him knowing what I’m capable of and him wanting me to go out there and let it loose, like I will, it’s good to have that connection.”

Now, Murray isn’t the only young signal-caller in the Cardinal quarterback room…at least for now. The next step would seem to be trading Rosen, but Keim said they will not give him away at a discount and the team is fine keeping both Murray and Rosen on the roster to battle it out for the starting job.

“We have two really good ones,” Keim said of his quarterbacks. “Depth is a big thing in the NFL. Attrition is real, and you never know when you’re going to need another one.”

Kingsbury said he did talk to Rosen leading up to the pick on Thursday to let him know they would be selecting Murray.

The Cardinals are sitting comfortably outside of the box by hiring a head coach with zero NFL coaching experience and drafting a quarterback in the top-10 back-to-back years. They’re hoping to change the way NFL franchises operate with the moves they’ve made the last few months.

That was just the first round too.